Interview: Anti-Trafficking Expert Explains How and Why Slavery Is Thriving in Asia | Asia Society Skip to main content

Interview: Anti-Trafficking Expert Explains How and Why Slavery Is Thriving in Asia 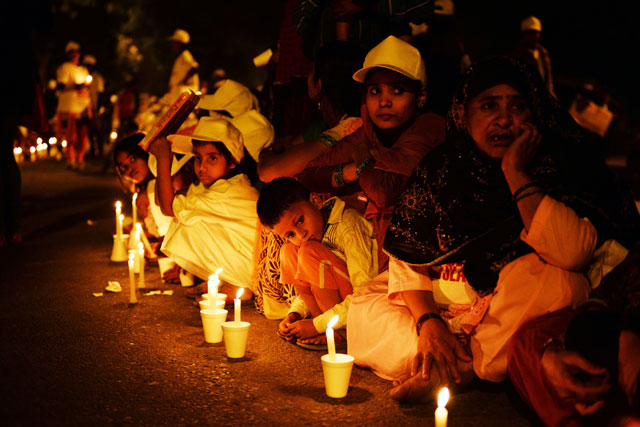 Children are pictured with candles during a protest against child slavery attended by Indian Nobel laureate Kailash Satyarthi in New Delhi on Nov. 22, 2014. (Chandan Khanna/AFP/Getty Images)

More than two decades ago, Matt Friedman entered a Mumbai brothel to check on public health conditions, but instead was confronted with something far more sinister. As he walked in with a police officer, an 11-year-old girl wearing an adult dress threw her arms around him, begging to be saved.

As Friedman took the girl’s hand, the officer stopped him, insisting that her traffickers would kill them if they left with her. The reluctant decision to stand down would forever haunt Friedman. “I felt like it was sort of a life test and I failed it,” he says. “So my way of addressing it was just surrendering to the fact that this is what I’m going to do with my life.”

Since then, Friedman has devoted himself to a problem that many believe ended generations ago: human slavery. From young boys forced to work in Chinese brickyards to women trafficked across borders as unwilling prostitutes, millions around the world still live under slavery conditions. Friedman’s work with the non-profit Mekong Club focuses on the private sector, helping business remove slavery from consumer product supply chains.

Ahead of his January 22nd presentation on modern human slavery at Asia Society Hong Kong, Friedman explained to Asia Blog what the situation is today and how the paradigm in Asia is shifting.

Just how bad is slavery in the world today?

There are more slaves now than at any point in history. The new estimate on the number of slaves around the world is 35.8 million. But out of that number, only about 50,000 people are helped and only about 4,000 criminals are punished out of maybe 500,000 that are out there. So we’re just not winning the game. With all of the things that are happening, we’re reaching less than one percent of the victims out there.

How effective have various governments been at combating slavery?

It’s government’s responsibility to address this because anything to do with human trafficking or slavery is illegal. But governments don’t really like this topic. The idea of slavery taking place within their borders is quite embarrassing, so you see a lot of governments that don’t really take an active role. The other thing is that the issue is very confusing, especially when it comes to forced labor. There’s a fine line when it comes to a person being exploited in a labor situation vs. being in a slavery situation. Law enforcement doesn’t feel comfortable going into factories and judging if someone is in that situation. The last thing is that there’s tremendous corruption involved with slavery. There’s so much money being made — $150 billion a year — so it’s difficult to avoid corruption creeping into law enforcement. As a result we have a lot of countries that simply can’t address the issue because the police are in some way involved in helping to protect it.

What kinds of trends related to slavery are we seeing in Asia specifically?

Sixty-six percent of the world’s slaves are in Asia. In China there’s a gender imbalance of about 1.2 men for every one woman, which results in a lot less women around for marriage. So we see bride trafficking. You also see human trafficking from less developed locations to places that are more developed. For instance, Thailand 25 years ago didn’t have Burmese, Laotians, and Cambodians going there, but as it became more prosperous it became a magnet for people crossing over the border to receive jobs there. And because there were so many people swimming in this migratory pool, it was easy to pick people off and put them into exploitative situations. Then you have feudal systems in places like China, Vietnam, and Thailand that never really went away where you have very powerful local officials who pretty much run everything and have the ability to exploit.

Economically, what also happens in some locations is in order to increase profits, people simply stop paying their staff. If there becomes a competitive environment in a labor situation, what you sometimes find is people reducing their costs until the only way they can continue is to not pay workers. There are a lot of competitive things that happen in global trends as it relates to workers.

If you stop and look at where the slaves are, 75 percent of them are in forced labor and 60 percent of THEM are associated with supply chains. So who knows about the forced labor situation better than the private sector? Nobody. Often the media and the NGO world use naming and shaming to force corporations into doing things, but at the same time, that tends to shut corporations down. So to create a balance with the naming and shaming, we at the Mekong Club basically have services for the private sector to educate them about what slavery is, do audits and train them so they know how to identify their own risk.

In all the work you’ve done, what are some of the things that have really left an impression on you?

I’ve probably interviewed a thousand victims. I knew a lot of victims in Nepal through a book project I was working on, and nearly all of them are now dead. Imagine the insult to injury, to be put in a situation where you’re forced to service 10 to 15 men per day for an extended period of time and then you’re diseased and thrown out on the street. Then you return to Nepal only to die of HIV/AIDS. You also hear of men and boys on fishing boats and in sweatshops. All the contact that I’ve had with these victims over time has just had a cumulative effect. It’s made me feel that someone has to do something, so why not have it be me?