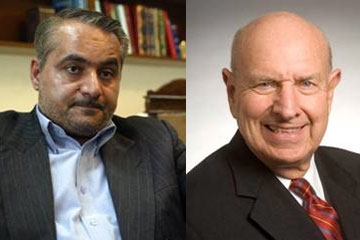 Diplomatic relations between the United States and Iran have been non-existent since 1980. An interests section maintained by Iran at the Pakistani embassy in Washington, D.C., and a similar U.S. office at the Swiss Embassy in Tehran are what remain. But recent developments, purported secret work by Tehran on nuclear weapons, charges of an Iranian plot to assassinate Saudi Arabia's ambassador to the United States and the latest news of a drone crash in Iran have strained the relations between the two countries as seldom before.

Ambassador Hossein Mousavian — currently a visiting research scholar at Princeton University’s Woodrow Wilson School of Public and International Affairs — will be in conversation with U.S. Ambassador Thomas Pickering, who held a range of ambassadorial-level posts and served as U.S. Undersecretary of State for Political Affairs (1997-2000) at the Asia Society event "The Future of U.S.-Iran Relations." Moderated by Asia Society Vice President for Global Policy Programs Suzanne DiMaggio, the discussion will explore these and other key issues including Iran's upcoming election, economy, relations with Washington and Syria and its role in the Arab Spring. (Please note: The event is now sold-out, but will also be a free live video webcast on AsiaSociety.org/Live from 6:30 to 8:00 pm ET.)

Asia Blog interviewed Mousavian by email to get a preview of some of the issues that will be discussed next Tuesday in New York.

The latest IAEA report (November 2011) points to "possible military dimensions" of Iran's nuclear program but stops short of saying that the country is currently seeking nuclear weapons. Is Tehran prepared to re-engage with the P5+1 in negotiations? Do you see a way to break the nuclear impasse?

The latest IAEA report in my opinion was politically motivated and lacked the viability and professionalism of a technical report as it had nothing substantially new to add. The report was primarily based on U.S. intelligence reports presented to the IAEA a few years ago and all IAEA members knew its content. Furthermore, the content of such claims was presented to the Iranians by the IAEA in 2007 — Iran responded to all claims in a lengthy document of over 100 pages.

During the past month, there has been a series of unprecedented actions against Iran, including the UN Resolutions on terrorism, human rights and the IAEA resolutions on the nuclear dossier. The coordination and culmination of such actions indicate perhaps a political decision has been reached behind the scenes by Western powers to aggressively implement a regime change policy towards Iran rather than pursue diplomacy on the nuclear issue. This Western agenda is based on the false assumption that Iran is domestically vulnerable due to internal disputes and international sanctions. As long as this point-of-view and strategy are pursued, I am not optimistic about a breakthrough on the nuclear impasse.

The U.S. Senate recently passed an amendment with a vote of 100-0 sanctioning financial institutions that do business with the Central Bank of Iran. If the bill becomes legislation, it would likely lead to a destabilization in oil prices internationally and render a huge blow to Iran's economy. What do you think Iran's response will be?

The recent U.S. Senate sanction bill is further targeting the Iranian nation, rather than the administration. However, more pressure and sanctions will lead Iran to become more aggressive, radical, and unpredictable. Sanctions and pressures will not compel Iran to change its nuclear policy because the right to peaceful nuclear technology, including enrichment, is a matter of national pride and consensus.

Although the prospects for direct bilateral dialogue between Washington and Tehran seem dim at present, are there any immediate steps both sides could take to begin to build trust?

The unprecedented cooperation between Tehran and Washington in 2001 during Mr. Khatami's presidency aimed at combatting terrorism and advancing the "war on terror" in Afghanistan was a unique opportunity to lay the foundation for regional cooperation between the two countries on a broader set of issues to advance peace, stability, and security in the Persian Gulf and the Middle East. Unfortunately, the United States brought an abrupt end to this unique opportunity, after it labeled Iran as a member of the "Axis of Evil."

In early 2011, Tehran sent a powerful signal to Washington, indicating its readiness to host the U.S. Special Representative to Afghanistan in order to discuss joint cooperation on Afghanistan. The United States did not respond appropriately to Iran's overture. However, I am still confident that through cooperation on common issues, such as stability in Afghanistan and Iraq and halting drug trafficking, the tensions between the two capitals can be reduced, paving the way for other opportunities for dialogue to open, and leading to final rapprochement.

Internal divisions within the Iranian government have become increasingly visible over recent months. Media attention has focused on what appears to be a power struggle between President Mahmoud Ahmadinejad and Supreme Leader Ali Khamenei. What are the key points of tension?

Power struggles have been present in Iranian politics since the Islamic Revolution and this latest development is nothing new, nor is it unique to the Iranian government, as we have seen such disputes in European and American politics. Lately, the internal division in the policy trajectory involves a heated debate in American politics, notably between the Democrats and Republicans on major domestic and foreign policy issues.

The difference in opinion, specifically between the Supreme Leader and the Presidency, has also existed since the Revolution. Even while he was President of Iran in the 1980s, Ayatollah Khamenei had disputes on some issues with Ayatollah Khomeini. Similarly, presidents that followed — notably Mr. Rafsanjani, Mr. Khatami and currently Mr. Ahmadinejad — have all had some differences of opinion with the Office of the Supreme Leader. Nevertheless, it is important to note that the Supreme Leader has the final say and Presidents have respected his final decisions.

Iran's Supreme Leader recently hinted that the presidency in Iran might be abolished and replaced with a prime minister chosen by the Majlis (parliament) "in the distant future." What would this new direction mean for Iran's political system?

Since the Islamic Revolution, there has been an ongoing debate about the structure of the political system in Iran. During Imam Khomeini's era, Iran had three Presidents (Banisadr, Rafsanjani, and Khamenei) who were elected through a popular vote, while the Prime Minister was elected by the Parliament. Following the death of Imam Khomeini, constitutional reform was enacted to change the government into a presidential system, abolishing the post of the Prime Minister and transferring its authority to the Presidency. This change into a presidential system led to three presidential periods during Ayatollah Khamenei's era, and currently there is a domestic discussion on the comparison of the two models. However, I am confident that the current government structure will remain in place for the presidential elections in 2013.

Saudi Arabia and Iran are locked in a bitter rivalry, battling for influence since the political upheavals of the Arab Spring. In light of the recent alleged Iranian plot against the Saudi Embassy, how do you see tensions between the two countries playing out?

Rivalry between Saudi Arabia and Iran began prior to the Islamic Revolution in 1979, while the rivalry between Arabs and Iranians has a longer history dating back more than a millennium. Hence, it is unlikely that it will be resolved in the near future. Following the Islamic Revolution, this rivalry between Saudi Arabia and Iran intensified since Saudi Arabia and other Arab states fully supported Saddam Hussein during his invasion of Iran (1980-1988), including financial support amounting to billions of dollars. The relations were most severed following the death of hundreds of Iranians pilgrims during the Hajj ceremony in the late 1980s.

The status quo continued until the mid-1990s, when President Rafsanjani and Crown Prince Abdullah met and decided to end hostilities. During that time, I was the Iranian ambassador to Germany when President Rafsanjani gave me the mandate as his special envoy to meet Crown Prince Abdullah to discuss the framework for cordial relations. I had four rounds of meetings with Prince Abdullah in Casablanca and Jeddah with the presence of Mr. Rafsanjani's son. We concluded with a fairly comprehensive framework to revive relations between our two nations. Based on this framework, Tehran-Riyadh relations dramatically improved and were maintained until Ahmadinejad's presidency. Unfortunately, during this period, relations deteriorated and we had a major setback. As a person who has discussed major issues of concern and mutual interest with Amir Abdullah in the mid-1990s, I still believe there is considerable potential for strategic cooperation between the two major regional powers to enhance peace, security, and stability in the Persian Gulf.

With pressure mounting against President Bashar Assad's regime, Tehran has started to demonstrate a more nuanced position towards the crisis in Syria. For example, President Ahmadinejad has recognized the "legitimate demands" of protesters and "the people's right to elect and achieve freedom." What does this shift mean for Iran-Syria relations and Iran's role in the region more broadly?

Iran has adopted a dual-track policy in Syria since the uprising. One track has been overt, while the other remains covert. The overt policy is to support Bashar Assad's government against any foreign power, in particular NATO and United States, who are aiming for regime change and interference in the domestic affairs of Syria. The covert policy of Iran has been to advise the Syrian government to address the legitimate demands of the protesters, while avoiding the killing of civilians.