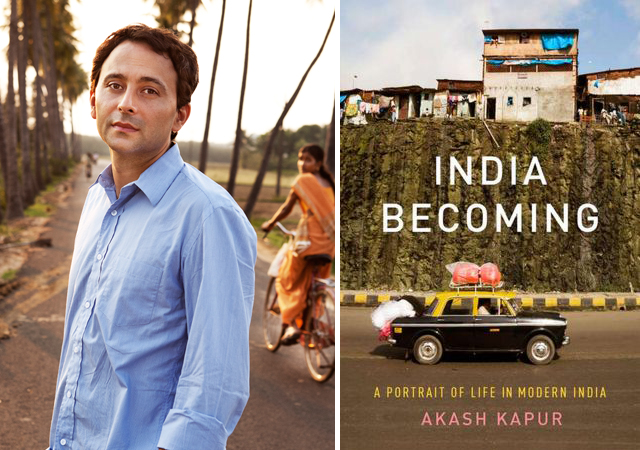 On Thursday, March 15, Indian-American author Akash Kapur will discuss his new book India Becoming and the challenges facing Indian society as the country speeds ahead on its path of growth and modernization with The New Yorker's Philip Gourevitch at Asia Society New York.

For those who can't make it to this program, a free live video webcast will be available on AsiaSociety.org/Live at 6:30 pm ET this Thursday. Viewers are encouraged to submit questions to moderator@asiasociety.org.

Recounting some key themes of his book, this past Friday, Kapur published an Op-Ed piece in the New York Times, "How India Became America," in which he described how the increasing Westernization of India has brought both prosperity and a collapse of traditional social structures.

Kapur spoke to Asia Blog through email about the complex process of social and economic development in India, which he calls a "double-edged sword."

What was your inspiration in writing India Becoming?

I was inspired by the sheer pace and complexity of change I saw all around me. When I first moved back to India, after more than a decade away, I was really astonished and in many ways bewildered by everything happening in my world. I wanted to understand my country better. I felt like I needed to reacquaint myself with the world I had left as a boy. It was really this desire to get to know the country better, and to understand what it and its people were going through, that got me started on this book.

What are some of the ways in which technological change (such as the spread of mobile phones, for instance) has impacted social life in India's urban and rural areas?

Technology has of course had a major impact on people's lives, in both urban and rural areas. This is true not only of India, but of everywhere in the world. I do sometimes feel, though, that too much is made of the technology story in India. The Indian technology industry (which is without a doubt highly successful and impressive) has in many ways come to stand in for the entire Indian development story.

But, of course, that story is way more complicated. Actually, when I first moved back to India, I had just finished a doctorate that looked at the impact of technology on rural development, and in many ways I was a true believer. I really thought that understanding India's tech boom was critical to understanding the country; and, like so many others, I also really thought that technology could save the nation, guide it out of poverty and underdevelopment.

I've come to understand that technology is in fact just a tiny part of the overall Indian story, and that the tech boom, fascinating and impressive as it is, cannot save the nation. In fact, the tech boom is largely confined to the cities, and the nation's technology industries only employ about a couple million people. That's a mere drop in the bucket in a nation of 1.2 billion people.

Do you feel that the positive effects of economic, social and cultural change in India outweigh their negative impact on society and the environment?

That's a very difficult question, and I suppose the only way I can answer it is by saying that it really depends on the specific individual, and the particular geographic location. For some people — many people — India's transformation represents an amazing process of emancipation and enrichment. I write about some of these people in my book — the Dalits who have risen in a newly meritocratic nation, for example, or the young men and women working in outsourcing companies and earning so much more than their parents could have ever dreamed of.

But I think it's important to recognize, also, that many people (and often the same people who have benefited) have also been adversely affected by the nation's transformation. People who have lost their cultural or social moorings, people who have had to leave an ancestral profession, often farming. None of this is to denigrate India's amazing process of economic development and all the benefits it has brought. But I think it's important — for the sake of honesty, for the sake of truthfulness and clear analysis — to recognize that development is often something of a double-edged sword.

In your view, what are some of the common stereotypes that the Western world has about India's rapid economic growth and its global image?

Well, stereotypes about India have really done something of a 180-degree turn in recent years. When I was growing up, the image that most people in the West had about India was of a hopelessly impoverished and backward nation. That image was in many respects true, but it was also somewhat simplistic. Now, I often find that people exaggerate the nation’s development and prosperity. Of course the country is much better off than it used to be, but it is still full of a terrible amount of suffering and poverty. Common Western narratives about India tend to focus on the nation's rise as an economic power, and in the process often overlook this lingering poverty.

One particular stereotype that I think people have of India today is that it's a country of tech entrepreneurs and tech wizards. As I mentioned earlier, this is partly true — India does have some very successful technology companies — but the stereotype also overlooks the fact that the nation’s technology boom is only a small part of the overall story. Much of India remains relatively untouched by modern technology, and certainly, much of India has not shared in the technology boom. So I think popular perceptions of India as a land being transformed by outsourcing and software companies are quite misguided.

India's rapid transformation is quite complex and often contradictory. Do you see any social or political forces working to find some form of social, cultural and environmental harmony?

I think that's a really good question. One of the great things about India is that it is a democracy, so in theory (and also to a significant extent in practice) its problems and contradictions can be addressed and perhaps resolved in a peaceful and democratic manner. I think that the recent mass protests we've seen in the country over corruption are one example possibly of the types of forces you describe — although it's important to recognize that the anti-corruption movement isn't simple, and many worry that it may contain latent authoritarian and intolerant strains.

The country also has a huge number of small and often unheralded NGOs and other civil society organizations that fight for people's rights, for justice and liberties, all across the country. These movements are small and local and grassroots. They often operate alongside the formal democratic processes. But they are really very much part of the nation's democracy, and in many ways, I think, offer the best hope of resolving — or at least mitigating — the nation's many contradictions and crises.