Interview: Ai-jen Poo on the 'Invisible' Women Who are Transforming the US Economy | Asia Society Skip to main content

Interview: Ai-jen Poo on the 'Invisible' Women Who are Transforming the US Economy 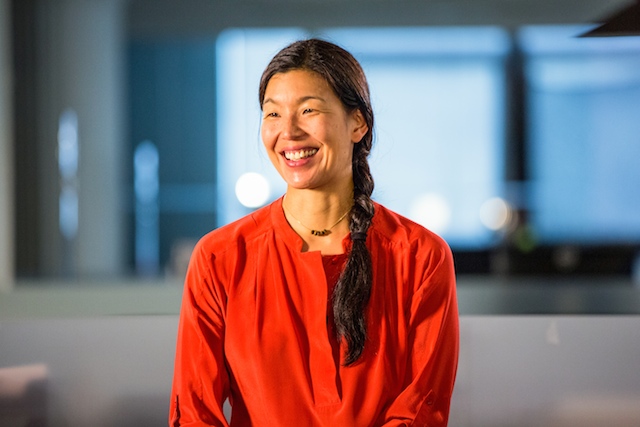 Born to Taiwanese parents, Ai-jen Poo has been organizing female immigrant workers since graduating from college. She is currently the director of the National Domestic Workers Alliance and co-director of the Caring Across Generations campaign, which aims to transform the way elder care is delivered. Poo is the recipient of a 2014 MacArthur “Genius” Award and was recently included on Fortune’s World’s 50 Greatest Leaders list.

AsiaBlog caught up with Ai-jen Poo by phone after she spoke at this week's White House Summit on Asian Americans and Pacific Islanders.

You’ve noted before that domestic workers are “the most visible invisible workforce.” What do you mean by that?

In most places these days, working families are having to rely on other workers to support their family tree needs. You can often find nannies pushing strollers down the street in Manhattan. You can see healthcare workers pushing wheelchairs near senior centers.

They are sort of everywhere, and yet, incredibly invisible in that they are not — especially when it comes to the private pay domestic care workforce — registered anywhere. Oftentimes they make direct arrangements with individual households and find their jobs through word of mouth. You could go into any apartment building and not know which apartments are actually somebody’s workplace and which are not.

So who are these domestic workers? Are they typically of a certain background?

Domestic workers are anyone who works in a private home, taking care of children, elderly, people with a disability, and the people who take care of homes. It is largely women — 90 percent of the workforce is women — and they range in age. We have members who are in their 80s who are still working as caregivers for other elders, and we have very young members who maybe even started doing this work with their own mothers.

It’s also a very diverse workforce. At one point when we surveyed the workforce, there were workers from 74 different nationalities that we talked to. Every city has a slightly different demographic. In New York, there’s a large concentration of Caribbean immigrant women, Latinas, also Asian women. In Chicago, 30 percent of the workforce is Polish immigrant. In Atlanta, many African American women still do this work.

It’s a very diverse workforce, a very global workforce, a lot of immigrants, but also people of all walks of life.

In 2010, you helped pass New York’s Domestic Workers’ Bill of Rights. Other states have followed suit. Are statehouses the best place to build momentum for the protection of domestic workers?

Right now, there are a number of states that have shown interest in advancing domestic workers’ rights and have said, “We don’t want to wait for Congress to pass laws.” But the truth is that we need change at every level of society, including in our own households.

A lot of employers themselves who hire domestic workers aren’t aware of their responsibilities and obligations and don’t even think of themselves as employers. Oftentimes, even if they wanted to do the right thing, they would find it very difficult to figure out what that is. There’s a long history of domestic workers being excluded from some of the most basic, basic protections that many of us take from granted. That’s why we started working, doing advocacy at the city-level and then at the state-level and also at the federal level.

There is a role for everyone to ensure that domestic workers’ rights and dignity are respected and upheld. It starts at home, valuing caregiving work and the work that goes into supporting families and taking care of homes. It starts with individual households and employers developing a respectful and fair employment relationship with the people who are working in their homes.

Many domestic workers in the U.S. are immigrant born. Your parents themselves were immigrants from Taiwan. Has your background influenced the way you work with immigrant workers?

I definitely see my parents and my immigrant upbringing as a large, large part of why I do what I do. I was raised by my grandparents, and my grandmother in particular instilled in me the value of respecting your elders and also the caregiving relationships that exist within families as such important relationships in life. This whole notion that we should be a society where we take care of each other across generations is something that was very intuitive to me because of my upbringing and the fact that I grew up in a multigenerational household.

I had such strong women role models in my life. Immigrant women who raised children, worked, went to school, learned English, and struggled to do all of that and to make it possible for my sister and I to have the opportunity that we had.

Your first job out of college was with the Women Workers Project at the Committee Against Anti-Asian Violence in New York City. What was that experience like?

I remember it being really eye-opening, just learning how to talk to women who have survived trafficking, cases of severe abuse and non-payment of wages. I worked on a number of cases involving domestic workers who had been through unspeakable forms of abuse and trauma at the hands of their employers. Just realizing that we have so much to do as a society and within our economy to increase the level of dignity and value that’s placed on work, particularly work that happens in the home. And just realizing how vulnerable the work can be when you’re isolated and behind closed doors.

It’s been a 20-year learning process for me to just bit by bit uncover how much of a Wild West it still is for so many women who are working in the shadows and how undervalued women workers are today. But we’re in this unique moment to transform that, given the fact that these jobs are expanding, the fact that women are more than half of the paid workforce and the fact that so much of the growth that’s happening in the economy is in these sectors in which women are working.

When you joined the Women Workers Project, did you already know this was an issue that you wanted to dedicate your life to?

No. I really just followed my heart and followed the stories of women, both of the kinds of abuses that they endure and the solutions that they were developing through working together, through building organizations and ultimately this national movement.

I feel like in many ways that I’ve grown up alongside this moment as it’s grown over the last 20 years. I can’t imagine where else I’d be but working alongside these women who are really transforming the future of the economy.

Earlier this month, The New York Times published an investigative series on the plight of nail salon workers in New York and other cities, many of whom are also immigrant workers. Do you see your work with domestic workers as a model for other categories of vulnerable workers?

There are many lessons that can be applied, I think. And there’s been great organizing and advocacy that’s been happening among nail salon workers for several years now. Groups like one of our affiliates called Adhikaar; it’s a Nepali human rights organization. They were a big part of passing the Domestic Workers’ Bill of Rights in New York and they actually have a nail salon organizing campaign in the Nepali community.

It’s very similar to domestic work situations. In many of these nail salons, some of the owners used to be workers and have a long relationship with the people who are working in the nail salon. Many of them are of the same ethnicity or even the same town or community. So there are a lot of dynamics that are about what happens within an ethnic economy where there’s a lot of close, familial-like relationships. There’s an intimacy there that’s similar to the domestic work setting.

It requires a lot of thoughtfulness about how change happens in this industry and how to engage employers as part of the solution, which is something that we’ve done in the domestic work industry. We always open the door to employers who want to step up and just need some support to do that.

At the end of the day, what we want is an economy where we transform low-wage and poverty-wage jobs into real pathways to opportunity and where everyone can participate in making that happen. It’s important to look at the situation in the context of growing, low-wage work sectors that need an intervention. We cannot be a low-wage economy. There are too many working people who work hard and live in poverty and that’s just not acceptable in a country with so much wealth and so much human potential — creative, innovative, and tech potential.

We need to think about it from the context of how we make the structural and cultural changes that create pathways out of poverty for working people — whether they are in nail salons or working in other people’s homes — to actually transform these jobs into jobs you can take pride in and really support your family on.

You’re currently developing the Caring Across Generations campaign, which brings together home care workers and elders in need of care. Why focus on elder care?

We’re in this amazing moment where people are living longer than ever before and that’s a good thing. We have the potential to live longer, love longer, connect longer, teach longer. The baby boom generation is reaching retirement age at a rate of 10,000 people per day. We are going to have the largest older population we’ve ever had.

We have no infrastructure or system in place to support that. Families are struggling to care for their loved ones. They’re piecing it together with asking the housekeeper to do some hours of care here, trying to buy long-term care insurance that they can’t afford there, and against their wishes, putting their aging uncles in nursing homes. It’s patchwork at best and really brutal at worst, in the absence of a real plan for how we’re going to take care of our aging loved ones.

We saw this as an opportunity to help make workers a part of the solution and to bring workers, families and elders together to develop the kind of win-win solutions that create more choices for families and seniors to age well, connected to their communities at home and to better jobs.

Millions of good jobs can get created in professional caregiving if we create the systems to support that. These are skilled jobs, difficult jobs. If you’ve ever met someone who does this work you know that it’s very difficult if you don’t have the heart for it. We’re talking about people who administer medication, manage chronic illnesses, lift people in and out of bed in very tricky situations. It is work that is undervalued as a profession. We can potentially transform that in this moment and create millions of good jobs.

In September 2014, you received the MacArthur “Genius” Award. How will you use the prize money?

We are going to be launching a fellowship program for domestic workers to come onto the staff of the National Domestic Workers Alliance as fellows and help build out our public policy programs, our membership programs, and deepen their leadership and engagement. We want to continue to develop generations of domestic worker leaders who can take our movement to the next level and contribute to broader movements for immigrant rights, economic opportunity for women, healthy democracy — all of the things we know we need for a thriving 21st century.