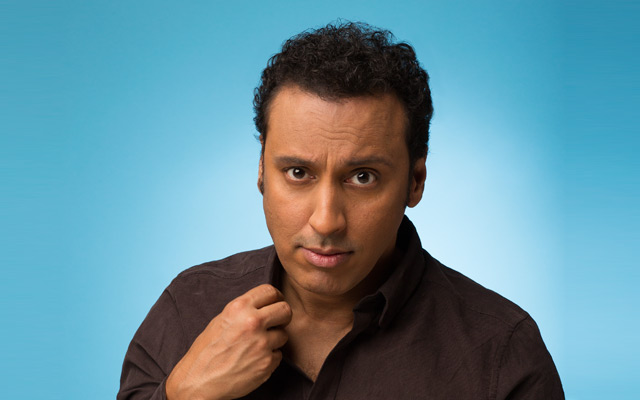 Many of you know Aasif Mandvi as the Daily Show's longtime "Senior Asian Correspondent," "Senior Middle East Correspondent," "Senior Foreign Looking Correspondent," and "Senior Muslim Correspondent." But Mandvi, who was born in Mumbai and raised first in England and then in Florida, is also an accomplished dramatic actor. He recently played the lead role of a Pakistani American lawyer in the play Disgraced, which earlier this year won the Pulitzer Prize for Drama. This summer, he turns once again to comedy, appearing with Vince Vaughn and Owen Wilson in The Internship, which opens in theaters June 7. We spoke to Mandvi via email.

You're now in India with Jon Hamm to either get married or shoot a movie. What are three things would you recommend to Jon that he must experience while in India?

I have been in India for a week now with Hamm, and I was right next to him when he experienced Chicken Tikka for the first time. I am very proud to have been part of that seminal moment in his life. Besides the food, I recommend he try the Indian head wobble. I want to see Don Draper throw in a head wobble just as a nod (or wobble) to the folks back in India. And also nothing says you are "the man" like first-time-in-India style dysentery.

What obstacles still exist for South Asian actors in Hollywood? Are there signs that things are getting better? Why or why not?

Things are getting better for South Asian actors in Hollywood, but we still need a South Asian leading man. South Asian men in Hollywood are still not allowed to be sexual, they can be smart or funny or nerdy, but not sexual. On the other hand, the women are overly sexualized in that they are seen as exotic or there to add spice. So even though we have come a long way in being represented in mainstream Hollywood, there are still more advancements to make.

If there were an Indian version of the Daily Show and you were a correspondent, what would you want your first story to be? How would you have to change your tone for an Indian audience?

First of all, if there were an Indian version of the Daily Show I would want to be behind the desk, not out in the field. As far as stories go, I don't know enough of what is going on in Indian internal politics, but I would have to work with people much smarter and funnier than me. (Kind of what I do back in the States!)

What are your three favorite Daily Show interviews you have conducted, and why?

Occasionally we get to do stories that really have something to say, try to make a difference and change policy. The three I am most proud of are:

"Poor Pee-ple," because we nailed the bastards.

"Ored to Death," because it was so satisfying to call that guy a douchebag.

And the one about the two-headed fish. I don't remember what we ended up calling it, but I almost went to jail doing that piece so it has a special place in my heart.

Do you think regular Daily Show viewers would be more surprised to learn that you got your start in Miami Vice or that you recently starred in a Pulitzer Prize winning drama? Do you think you are beyond getting typecast for comedic roles now?

I don't know the answer to what Daily Show viewers would think — I think most of them are stoned. But I do enjoy doing both dramatic and comedic work and cherish the chances when I can go back and forth.

Jon Stewart and John Oliver are both taking on new roles this summer. How do you think they'll do?

I think it's amazing that Jon Stewart is going off to direct this movie (mostly because it doesn't make me feel so bad for taking time off to go do movies when the boss is doing it, too). But I actually have read the script. It's powerful and I am very excited for him to be directing a drama. As far as Oliver taking over the desk, as an Indian I can only say beware of the British once they plant themselves somewhere. It is very hard to get them to leave. Just sayin'.