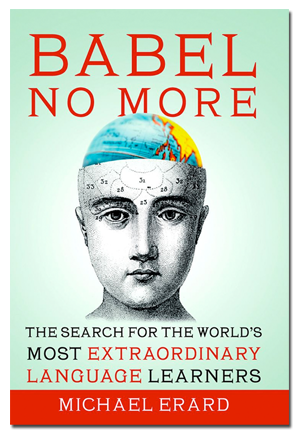 "Hyperpolyglot" refers to those extraordinary linguists who can speak at least six (or by some definitions, 11) or more languages. Michael Erard's engaging new book, Babel No More: The Search for the World's Most Extraordinary Language Learners, profiles several super language-learners.

Pronouncing the word "hyperpolyglot" is something of a phonological symphony. It starts in the throat with the glottal h, proceeds to the lips with two rapid p sounds, and then rolls into a couple of glorious alveolar l's, ending up appropriately enough with a stop sound in the final t. Just saying it makes me feel like a bit of a hyperpolyglot myself. I had always aspired to be one, in fact — until I read Erard's book.

Erard's book overall is a delight, but while I approached it expecting these language super-learners to instantly become my new linguistic heroes, I ended up finding many of them unsympathetic characters, driven more by obsession than passion. I had hoped to find portraits of people who take infinite joy in the multiplicity of sounds and rhythms that make up the world's languages and delight in using them to engage with others. Many of the polyglots portrayed, however, were isolated figures more concerned with memorizing enormous lists of words and trying to get just enough of the language so they can claim to speak or know it, and add another language to their list.

I was inspired by the author's observation that many of these people are great examples of what he dubbed "...the will to plasticity. This is the belief that we can, if we so wish, reshape our brains." But what most resonated with me about the book was the way it problematizes the notions of knowing or speaking a language. Claire Kramsch of the University of California, Berkeley, emerges as an especially persuasive voice. She notes that one might know enough of a language to accomplish specific tasks — ordering from a menu, negotiating a business deal, asking a patient about her symptoms, conducting a bank transaction, composing poetry, etc. — but that very few people have ever achieved the full range of linguistic competencies (both written and spoken) exemplified by an educated native speaker in a large number of languages.

Kramsch is most convincing in her assertion that to know a language means to know the culture of its native speakers. "You carry the language's cultural baggage — which would mean, among other things, that you know the significance of what you choose to say in this or that language." She notes that "one can play terrific scales on the piano and have a dazzling mastery of scales and notes, but that doesn't mean that you understand Mozart or that you are a gifted musician. It's one thing to master the code. It's another thing to understand what people mean, or why speakers of that code don't use it interchangeably."

This is a critical insight. Too many people approach the study of language precisely like that young pianist learning her scales — we're learning the code, but not how to use it to be make beautiful melodies. I have met many non-native speakers of Chinese and Japanese, for example, who have a wonderful command of grammar, know tons of vocabulary and can carry on conversations about a range of topics quite easily in the language, but lack the intuitive feel of the native speaker — they are loud and boisterous where a native speaker would be quiet, are boastful where a native speaker would be modest, say "thank you" where it's not necessary, and know little of the cultural references (history, literature, allusions and idioms) that are part of the DNA of those languages.

These people can accomplish a range of important linguistic tasks; they can certainly be said to speak the language, but do they really know it deeply? I have met others who may have a more limited repertoire of words, but are able to use the language elegantly and in culturally appropriate ways that suggest the competencies of a native — they bow at the right angle, can speak knowledgeably about history and culture, and seem to know intuitively what should be said and what implied, suggested, or referred to obliquely. So who can be said to have a stronger command of the language? If you'd opt for the less culturally sophisticated speaker with more words, Erard's book offers some convincing arguments that you'd be wrong. After all, language is not merely a tool for accessing and communicating information. It is the very fabric of our intellectual, cultural, and emotional lives.

For my part, I long ago accepted the reality that learning Chinese in particular was going to be a long-term endeavor. In a way, I wonder if all lifelong Chinese language learners haven't achieved some degree of hyperpolyglottism. After all, the spoken language is vastly different from the written language — just try to understand a newspaper if all you know is colloquial Mandarin! Then take 白话 vs. 文言文 — that's two already. Mandarin pronunciation and some vocabulary are different in Beijing, Taipei, Shanghai, and Singapore, so that makes three. Classical Chinese is a distinct form altogether, but one that you'll need to read the ancient philosophers or Tang poetry, which brings us to four, for sure. If you've lived in a Chinese-speaking community, it's very likely that you've been exposed to one or more dialects — there's five, at least. Add your native language, and you've got six or more. By my count, that makes almost anyone who has seriously committed to learning Chinese something of a hyperpolyglot. But to claim that title would be missing the point, wouldn't it?