How Will Trump and Duterte Change the U.S.-Philippines Relationship? | Asia Society Skip to main content

How Will Trump and Duterte Change the U.S.-Philippines Relationship? 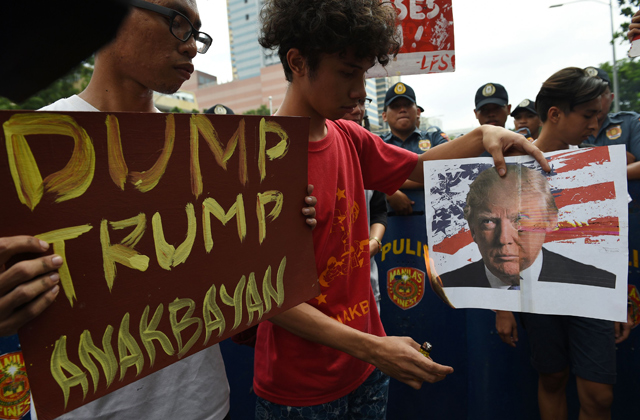 Filipino students burn an mock U.S. flag and photo of U.S. President-elect Donald Trump during a rally in front of the US embassy in Manila on November 10, 2016. (Ted Aljibe/AFP/Getty Images)

The 2016 elections of Rodrigo Duterte and Donald Trump as president of the Philippines and United States respectively sent shockwaves across the two countries. Both men, known for their fiery and unconventional rhetoric, have expressed eagerness in taking on long-standing traditions and shaking up the status quo in both Manila and Washington, D.C. What this means for the future of the U.S.-Philippine relationship remains to be seen.

On the one hand, Trump’s election may offer an opportunity to stabilize relations between the two countries, which had been deteriorating under Duterte and Obama. Duterte has already suggested he and Trump share a certain rapport, noting he told the U.S. president-elect, “We are similar and people with the same feathers flock together.” On the other hand, Trump and Duterte’s “speak first, ask questions later” instincts could increase the potential for unexpected turbulence in the relationship. The two could also find themselves at odds over a number of substantive issues, including military basing costs, offshoring of U.S. companies, and U.S. immigration policies.

Lindsey Ford, ASPI’s Director for Asian Security and Richard Holbrooke Fellow, talked with Doris Dumlao-Abadilla, a reporter for the Philippine Daily Inquirer, and an Asia Society Asia21 Young Leader, to discuss her thoughts on the way ahead for this important relationship. Excerpts from their conversation are included below. The conversation below reflects personal opinions and does not represent the formal institutional position of either the Philippine Daily Inquirer or the Asia Society.

President-elect Trump and President Duterte had an introductory call recently that President Duterte described as “encouraging,” while the Trump team noted they agreed to work together to address “matters of shared interest and concern.” What do you think these matters will be? What are some of the biggest priorities and concerns in the Philippines right now regarding the bilateral relationship?

I think one of the first things to address will be the status of the security relationship. As you know, President Duterte had previously said that he wants all U.S. troops out of the Philippines in two years, but he’s also said he is not necessarily reneging on obligations such as our mutual defense agreement and the 2014 Enhanced Defense Cooperation Agreement. He is clearly pursuing an independent foreign policy, but I don’t think President Duterte’s so-called pivot to Asia necessarily conflicts with our defense agreements with the United States. So I think it will be important for both sides to clarify the status of these military arrangements.

Another thing that will be a big concern is to discuss U.S. immigration policies. President Duterte has complained many times in the past that he feels the United States has unfair visa requirements for Filipinos, especially considering that its gives visa-free privileges to citizens of other Asian countries like Singapore and Brunei. Duterte has even shared personal anecdotes on this front, noting his own difficulties traveling to the United States when he was younger. This issue has really resonated here in the Philippines. There is rising consumer affluence, so a lot of young people want to travel to the United States, and there is, of course, great interest in going to find work in the United States as well. Given Trump’s position on immigration, it may be unrealistic to expect the United States to move right away to allow visa-free travel for all Filipinos, but maybe there could be some form of easing over the next few years. This will be important because President Duterte has suggested that perhaps there will be a tit-for-tat on visa restrictions if the United States doesn’t change its approach. It won’t benefit anyone to build up travel and work barriers.

Is there any concern in the business community in the Philippines about the future of the U.S.-Philippines relationship, especially given the international fixation on some of Mr. Duterte’s alleged human rights abuses?

The bigger concern right now is what it would mean if President-elect Trump implements some of the protectionist and isolationist views he has talked about during the campaign. That’s a big issue right now for our businesses, especially since the outsourcing industry makes up a significant portion of our economy. The business process outsourcing (BPO) industry generates approximately $22 billion in annual revenue here in the Philippines, and U.S. businesses account for approximately 70 to 80 percent of that revenue. For example, JPMorgan has around 15,000 employees here in the Philippines, many of them doing outsourced work. They are here because moving these operations to the Philippines provides significant cost efficiencies for their company. So it will really be a big blow if Trump follows through with his earlier threat of maybe preventing U.S. companies from pursuing offshore operations.

Another issue of concern for the business community will be commodities and oil prices. Theoretically, the Philippines should benefit when oil prices are low since we are an oil-importing country. We’ve seen this in recent years due to the slump in oil prices. But there is a limit to these benefits because there are other concerns as well. For example, we have a lot of Filipinos working in the Middle East, so if the oil downturn is protracted, that puts many people’s jobs at risk as petrodollars disappear. The loss of overseas remittances would be significant for the Philippine economy. In general, below a certain threshold, for example, if oil prices are below 40 to 50 dollars per barrel, then the negatives outweigh the positives for a country like the Philippines. So Trump’s push for increased U.S. energy production is another issue that will be a concern for us.

Is there anything Trump could do or say right at the outset of his administration that would reassure people in the Philippines about the prospects for U.S.-Philippine relations?

The first would be to clarify his positions on offshoring and what that will mean for U.S. companies working abroad, as I mentioned earlier. The second would be to reassure people that U.S. defense agreements and commitments to the Philippines still stand. I think one of the factors driving President Duterte’s decision to befriend China was the feeling that the Philippines couldn’t get the kind of clarity and support it wanted from the United States on military and defense issues. You saw this during his visits to China and Japan when he repeatedly talked about how one-sided he feels our bilateral military agreements are with the United States. If President Trump could help reiterate that U.S. commitments still stand and why these agreements are so important and relevant for both countries, that would go a long way. We’ve been traditional allies for a long time and it would really be a pity to throw away that history and our strong relationship. My hope is that the Philippines and the United States will be able to keep the good relationship we’ve had over the decades — and even improve on it!

The last thing I would add is that while some of the statements that Duterte has made over the past year have not been delivered in the most cordial way, it’s important for Americans to understand that his statements and his promises resonate with the Philippine population at home. They reflect a growing trend, and that is that many people feel they are disenfranchised and haven’t felt the benefits of economic growth. I think this is something perhaps the United States understands as well after its election. The United States should realize though that if it decides to step back from its role in the international system as a partner to countries like the Philippines, there will be certain consequences when gaps are left in the international system. The world faces many challenges right now, and so I would argue that more than ever it is an important time to pursue bilateral cooperation and to strengthen U.S. relationships across the world so that we can make growth more equitable for all of our people.