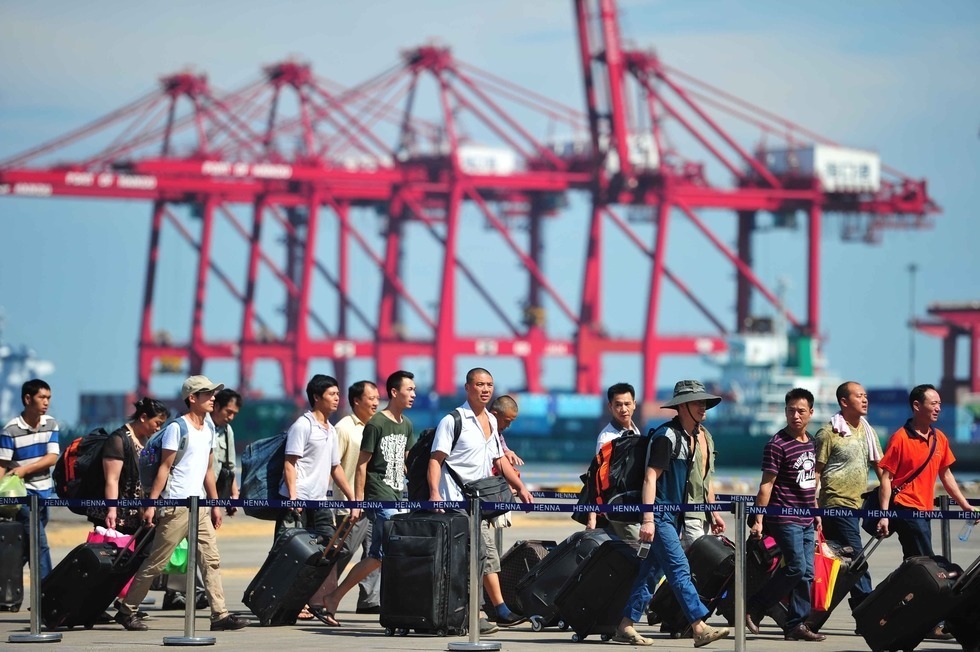 Chinese nationals disembark from the passenger vessel Wuzhishan after the ship arrived at the Xiuying Port on May 20, 2014 in Haikou, China. The first group of Chinese workers, 989 in total, arrived at Xiuying Port from Vietnam to escape rioters protesting against a Chinese oil rig that was erected in an area of the South China Sea that they believe to be Vietnamese territory. (ChinaFotoPress/Getty Images)

The recent flare-up of tension between Vietnam and China in the South China Sea has underscored a new concern about international relations within Asia: the possibility that political disputes will imperil the region’s economic integration and growth. Now, more than ever, companies operating in Asia must not only keep a focus on key financial metrics, but must also account for political, reputational, and other non-financial risks when developing regional strategies or making key investment decisions.

Many countries in Asia are now economically dependent on each other. Intra-Asia trade increased from 50.5 percent in 2001 to 53.3 percent in 2009. China has not only become Asia’s factory but has also invested in low-cost manufacturing in neighboring countries such as Vietnam. China is Vietnam’s largest trading partner, and two-way trade topped $50 billion in 2013.

Nevertheless, some 20,000 Vietnamese factory workers recently staged protests against factories they believed were Chinese-owned (the factory owners are actually Taiwanese and South Korean), setting fire to 15 facilities. The protests responded to China’s decision to build a deep-sea oil rig in a highly disputed area of sovereignty in the South China Sea.

A similar dynamic has played out between China and Japan in the East China Sea over the Diaoyu/Senkaku Islands, to which both countries lay claim. In 2012, Chinese citizens angered by the island dispute protested at a variety of factories in China owned by Japanese companies including Toyota, Honda, Nissan, Mazda, Panasonic, and Canon, causing brief disruptions in their operations. At around the same time, a survey found that 41 percent of 260 Japanese firms were reconsidering their business plans, with some thinking of moving operations elsewhere.

In a survey conducted by McKinsey in 2010, 67 percent of company respondents stated they were unprepared for geopolitical instability, with only 5 percent noting that they were prepared. How might companies mitigate geopolitical risks like those seen in Asia today?

One approach may be to maintain operations in countries that are seen as higher-risk but strategically important, while adding capacity in Asian countries that are more closely aligned with a company’s home base. For example, Toyo Tyre of Japan opened a plant in Malaysia in 2013, with plans to make it the company’s highest-output facility outside Japan. Toyo Tire CEO Kenji Nakakura noted after the 2012 production disruptions, “The protests may affect our decision on making further investment in China. China remains an important market from which we can’t retreat, but when it comes to increasing investment we may be more inclined to do it in other countries such as Malaysia.”

This trend to investing in safer havens could accelerate as a result of new trade agreements. For example, countries involved in TPP negotiations such as the U.S., Australia, Brunei, Japan, Malaysia, Singapore, and Vietnam may choose to invest more heavily within these markets in the future should the deal be consummated.

A second approach could be to form joint ventures (JVs) with local partners. Though not without risks, JVs put a “local” face on the company that can help lessen the risk of being targeted as a “foreign” company. The PC maker Lenovo has used JVs in foreign markets to position itself as a local concern. Lenovo struggled after taking over IBM’s operations in Japan, with PC sales dropping by half from 2004 to 2009. In 2011, however, Lenovo formed a joint venture with NEC in Japan, creating the number one PC company in Japan. According to S. Chandurai, a professor at the University of Pennsylvania’s Wharton Business School, Lenovo was “most likely betting that joining forces with a well-respected local JV partner is a smart way to allay Japanese consumers' sensitivities about its growth ambitions in their country.”

This is probably the result of two factors. One factor may be related to the product category. Rod Lappin, Executive Chairman of NEC Lenovo Japan, has said, “It’s very hard for foreign firms to compete on consumer electronics here. Lenovo on its own would have had quite a hard time and that is why the joint venture with NEC was so good for us.”

As noted, though, JVs present risks. A joint venture can come apart due to cultural and personality differences, as was the case with Danone’s bottled water joint venture in China. A lack of clear controls and oversight can also lead to quality problems, such as in the 2008 scandal over melamine contamination in infant formula involving a joint venture between Fonterra and San Lu.

A third approach can be to outsource political risk by utilizing a contract manufacturer. Hong Kong-based Li & Fung Limited, for example, provides turnaround product capabilities from design to manufacturing in categories such as apparel. With a network of over 15,000 suppliers, the company can rapidly shift production from one country to another should the need dictate due to some unforeseen risk. Li & Fung’s philosophy is based on “network orchestration,” whereby it connects partners to form a highly flexible and adaptable supply chain without owning factories. An article written by Li & Fung leaders Victor and William Fung and co-author Yoram (Jerry) Wind explains, “If Li & Fung Trading receives an order for 100,000 men’s dress shirts today, the best place to source the yarn might be Korea, the buttons might come from China, and the weaving might best be done in Taiwan, while Pakistan might be the best place for the cut, make, and trim. If the same order came in a month later, it might result in a completely different supply chain. Suppose Pakistan faced political unrest at that point—the entire supply chain could be shifted to another factory in another country.”

While there are a variety of approaches that companies can take to mitigating geopolitical risks, executives should keep in mind that the risk-management process is as important as the final outcomes. Companies usually do well to embark on a rigorous risk-mapping exercise prior to making major investments. They should chart the likelihood of various risks occurring against the severity of impact these risks may have, and develop appropriate risk mitigation strategies and contingency plans. They can then select options that appear attractive in light of any geopolitical risks they may face in the region.