How Chinese Girls Can Bring Down the Rural Patriarchy 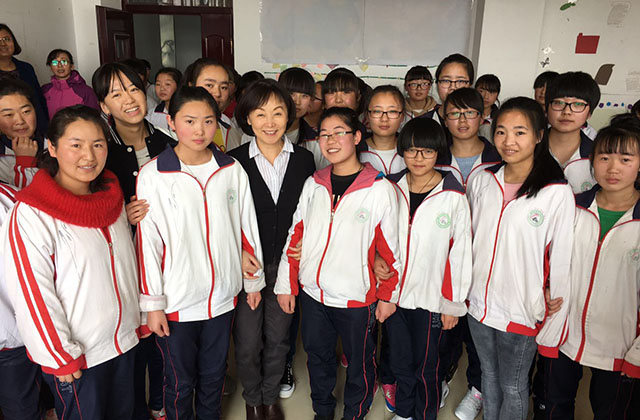 While China’s post-reform economic growth has dramatically raised living standards for most of the country, many people in the poorest regions remain trapped in a cycle of poverty. Rural women have been particularly left behind: In 2010, they earned only 56 percent of what their male counterparts made — down from 79 percent two decades earlier.

On April 10, Tien Ching will join a panel at Asia Society in Hong Kong on rural-urban migration titled "Migrant Workers in China: Hukou, Hope and Beyond." Learn more

Tien Ching, a Canadian citizen who grew up in China, aimed to close these opportunity gaps. In 2010, she founded the non-profit organization Educating Girls of Rural China (EGRC), which sponsors high school and university education for disadvantaged rural Chinese girls. The initiative is premised on the belief that educated women will have educated children, and to date, it's supported nearly 700 girls, with a graduation rate of over 99 percent. As founder, Ching personally interviews prospective candidates for the program throughout Gansu and Guizhou, two of China’s poorest provinces.

In an interview with Asia Blog, Ching described the situation for the rural girls and women she’s encountered and how younger generations are becoming less accepting of the rural patriarchy.

Why is the opportunity gap between rural Chinese boys and girls so large?

There is still a large preference for boys and discrimination against girls in rural China. Many of our girls grew up feeling that being a girl is definitely a disadvantage, and that’s often reinforced by their parents. I’ve heard stories over and over from our girls about seeing their mothers abused or discriminated against, or experiencing it themselves.

In the first few years of my work, I encountered a few families where the mother gave birth to as many as nine children because the first eight were girls. They just keep producing children until a boy is born. Then if things are tough financially for the family, it's very common for girls to quit school in order to support their brother's education. Recently I discovered that even among our university graduates, many saved money or borrowed money to pay for their brother’s housing or their wedding. They feel obligated to support the boy.

I think that has improved over the years — in these high schools I'm working with, the proportion of boys and girls attending is pretty similar now, almost equal. Recently I asked all the girls in our high school sponsorship program — about 160 of them — how many of their mothers had even an elementary school education. There were hardly any, less than 10 percent. So these girls already being at the high school level shows things have improved, but gender inequality in rural China is still very visible.

Most students study through 9th grade [the last year that schooling is free], but only about 40 percent of 9th grade graduates go on to high school in rural regions of western China. If girls don't go to high school, they will most likely get married very early, even as young as 15 or 16 [even though the official minimum marriage age for Chinese women is 20]. Then by age 19 or 20 they've already become mothers and will never have a chance to go to school again or find better-paying jobs.

Rural Chinese women once had infamously high suicide rates — which has been attributed partly to dire poverty, expectations of subservience to men, and ill-treatment by families and in-laws. Those rates have dropped substantially in recent years in correlation with urbanization, but do you still often see signs of these issues among the women who remain in rural areas?

I'm never surprised when there are suicides. Some of the rural women in their 30s and 40s can't even write their names. They sometimes haven't even been to elementary school, so their choices are very limited. If I visit a village and walk from one side to another, I can usually spot a couple of women who appear to have gone mad. It might look like they’re homeless; their hair hasn’t been combed for days, and they’re wandering the streets or squatting in a corner. They are certainly not in a normal state.

I encountered one woman who was already depressed, not quite normal, but then her husband died in a car accident and she tried to kill herself by jumping in a well. She didn't die, but she went completely mad. She’s now been locked in a barn and sleeps on the ground. It's so tragic. She has two girls, and now only the grandmother looks after them. One of the girls is under our sponsorship, and we're paying lots of attention to her.

There are some 60 million “left-behind children” in China who are left with grandparents or other caretakers in the countryside while their parents work in the city. In your experience, how are children in these situations affected?

Some of them are really deeply disturbed emotionally. They can't concentrate and can't study. We stay in touch with our girls after they graduate from universities — many get married, become mothers, and get good jobs. But I’ve realized that even if they look like they're successful and have gained confidence, they can still be very fragile emotionally.

Even for people who grow up in the West, it's sometimes not just the socioeconomic status that determines success, but also how much attention and love you receive from your caretakers when you’re young. Some of the girls, even though they're all poor, said their parents really love each other and give them love and attention, so they didn't feel that being a girl was as much of a disadvantage. These girls tend to be stronger. But those who witnessed their mother being discriminated against or abused, or who have experienced it themselves, will have more emotional baggage.

So I’ve realized these girls need more than just financial sponsorship — they need lots of emotional and moral support. I keep in touch with them personally through school and for the first few years after graduating. We have also set up groups where older students and graduates will give peer counseling and mentorship to younger girls while they’re in school and then later when they’re working. We want to see them “pay it forward” by helping others needing an education.

In meeting all these young women and their mothers in the countryside, does it seem like the younger generation is less accepting of patriarchal attitudes and the notion that women are consigned to inferior roles?

Yes, and I think this has so much to do with education. Without education, you can go three or four generations and things won't change. Once these girls receive a 9th or 12th-grade education, they’ll at least have basic knowledge. They will probably think differently than their mother and accept the situation very differently. I definitely see things changing for the better. The gender inequality issue is very deeply buried in the culture, so I think it will take generations to really change and improve, but I think the key is to give education opportunities to women. Then they can really think differently and behave differently. And once you can achieve your financial independence, you can make choices.

Why did you decide to start doing this work?

I always regretted not fulfilling my own dream of going to university. My kids attended Canadian universities, so I saw the opportunities that children have in the West. In the 1970s, my mother was a doctor who traveled around different villages in Gansu. In those places, we saw real poverty — no clean drinking water, only one blanket for the family. Girls were often engaged at age nine or 10, then married at 12 or 13. These things stuck in my mind. I remembered those images after almost 20 years, and I thought those girls in Gansu were probably just as smart as my children. I remember how desperate I was then [for an education], so everything just came together. I have friends in Canada who always tell me it’s not too late for me to go to college, but I think it’s much more meaningful for me to help these girls get their education.