How China's Past Informs its Push for Power 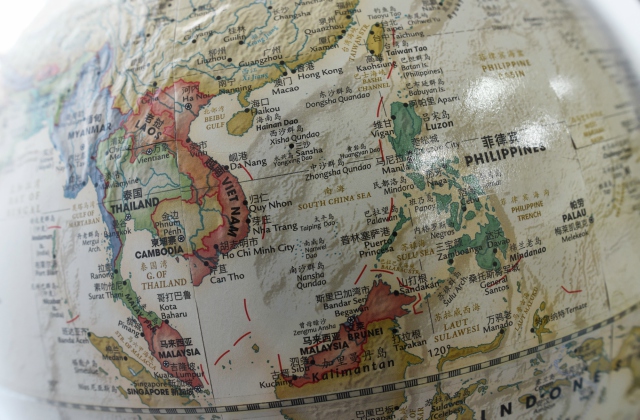 The South China Sea (C) is seen on a globe for sale at a bookstore in Beijing on June 15, 2016. (Greg Baker/AFP/Getty Images)

Since the turn of the 21st century, China has engaged in a more assertive approach toward foreign policy, enforcing disputed maritime claims in the East and South China Seas and making investments in parts of the world that it had previously ignored. This assertiveness represents a departure from China's previous strategy of avoiding confrontation and focusing mainly on domestic affairs.

In a new book, the author and journalist Howard French argues that China's newfound assertiveness isn't, actually, new. In fact, China views its present-day foreign policy as a restoration of the country's central position in world affairs, one in which smaller countries on its periphery pay tribute to it and one that may eventually bring China into conflict with the United States.

On May 23, ChinaFile will host a discussion of China's foreign policy featuring Howard French and Orville Schell. The program will be available via live webcast at 6:30 pm New York time.Learn more

French, who was a longtime foreign correspondent for the New York Times, is currently a professor at the Columbia University School of Journalism. He is the author of several books, including China's Second Continent, an examination of the Asian country's economic activity in Africa. In this interview with Asia Blog, which has been lightly edited for clarity, French explains the classic roots of China's foreign policy and why demographics, more than anything external, poses the biggest threat to the country's destiny.

Do you think China ever actually abandoned the idea of being the dominant power in Asia?

I think it’s always been there. If you think about the early Republican period, early in the 20th century, there was a lot of the language about building a modern republic on the ashes of fallen Chinese dynasties, restoring a preeminent place in Asia, and recovering (in their words) “our lost territories.” What they meant by "our lost territories" is not that they want to directly govern parts of India and Pakistan or Burma or Malaysia or Philippines or whatnot, but that once China has resumed its place in the world, these countries will return to the fold and defer to China. This arrangement will then constitute elements of tian xia as they’ve imagined it always did.

To what extent is tian xia used as a rallying point in contemporary Chinese society?

The phrase tian xia basically means that when governance is being delivered in a positive way, and there’s a broad sense of social justice and progress, then there’s order under heaven. Where this comes together though is this idea that, as I quote from John King Fairbank early in the book, domestic and international relationships have always been tightly bound together in classical Chinese history. When the mandate of heaven is enforced domestically in China, foreigners will come scurrying to the Chinese court to pay allegiance and to bow before it. By the same token, when foreigners come to the court to bow and kowtow to the emperor, that is, in fact, a tool of power that helps reinforce the legitimacy and strength of the emperor. They can’t really be separated.

There's a phrase I used in the book that talks about when there’s trouble outside, there’s trouble inside — and vice versa. When the mandate of heaven is weak internally, the barbarians drop their allegiance in China, and the contrary is also true. The Chinese people began to look around and say, “Hey wait a second, all these people are not kowtowing to us. This must be a statement of the strength of this particular dynasty."

You’ve written extensively about how China’s foreign policy has become globalized, particularly in parts of the world where until recently they didn’t have much of a presence. Is there a geographical limit to what China sees as its dominion?

Africa and Latin America and various other places where China is active today didn’t figure into Chinese calculations of its power in the distant past because these parts of the world were so remote given the era's technology, transportation, and communications. These areas didn’t count for anything in terms of their potential for exchange with China. That’s all changed in the recent past for obvious reasons, as globalization has swept the world. You can travel from Africa to Guangzhou in seven or eight hours. Trade flows between China and every other part of the world have exploded.

However, I would argue that China has a very particular historically-driven view of its immediate neighborhood that is tied up in this notion of tian xia and being surrounded by barbarians who are from one degree to another derivative of Chinese culture or refined by virtue of their contact with Chinese culture. So China has very special feelings about its immediate neighborhood, based on history and cultural attitudes. But I don’t think that China’s long-term trajectory as a power, or even its view of itself, is bound by its immediate region.

I think that both modern political science and this school of thought called realism would drive China to restore preeminence of its own neighborhood. I believe that China will seek to be as powerful as it can in the entire world. I don’t say that at all to raise the specter of Chinese menace. That’s just what great powers do. If China comes to dominate its neighborhood by whatever device or vehicle, it’s normal that China will then try to become more powerful on a greater stage, meaning the whole world.

How do you see this playing out in the future?

I think China will become more powerful in the next decades — that’s an almost automatic given. Whether it can become unchallengeable and preeminent in its own immediate region is a different question, and I think that there are a lot of unknowns and imponderables that make it hard to answer. But I’ll just throw out a few things.

The first is that we’re in the early stages of the very uncertain Trump era and nobody knows what that’s going to mean. It's possible that there may be some catastrophic screw-up or self-inflicted wound in the United States that dramatically changes the equation in terms the U.S.-China comparative strength. Who knows what Trump is going to mean at the end of four years or eight years or maybe even six months? This is a really difficult to imagine period that we’re in, strictly in terms of American power and American foreign policy. But let’s assume there are no big surprises.

On January 19, the day before the inauguration, nobody was imagining that the United States would be withdrawing from the Western Pacific or, even though Trump had announced he was going to leave the TPP, would reduce its security commitments to East Asia, principally to Japan but also South Korea and the Philippines. At the moment China faces, pretty much single-handedly, one of the most successful alliances in the history of the modern world. There’s the richest and by far the most militarily powerful country in the world, as well as the third richest country in the world that is quite a significant military power itself, plus South Korea, plus an assorted number of smaller countries that have significant security arrangements with the United States.

China has made incredible headway in a very short period of time in the South China Sea, creating seven artificial positions in the mostly submerged formations that they're building up into artificial islands and fortifying to one degree or another. This is a tremendous advance in Chinese power that a lot of people have underestimated. However, I can’t imagine any prospect that China can force the seventh fleet out of the South China Sea or the East China Sea. I can imagine no scenario, barring a catastrophic change that we posited, where that stops being true. And so strictly in hard power terms, I don’t see the case for Chinese preeminence in the readily imaginable future.

What these things are doing is raising the costs to the United States of any plausible war scenario. In other words, [they’re saying] “you can circulate here, you can drill here, you can do these flag exercises with your allies, but if push comes to shove in this region you’re going to lose many of your precious assets. And not just assets in the military sense, but symbols of your national power." China might say "We’re going to sink an aircraft carrier. Are you willing to face that risk?"

These are developments that are on their way. This is going to happen. The missile forces that China is developing and deploying along its eastern coast are among the world’s only missile forces that are designed to strike mobile and naval targets. Nobody else in the world, including the U.S., is developing missiles like that. And China is developing these missiles for one purpose and one purpose only — to make an American war on China in defense of one of its treaty allies or for some other part of the Western Pacific prohibitively expensive. I don't think we’re headed for a situation where China is in a very narrow, hard power sense about to become the unquestioned preeminent power in the western Pacific. But I do think we’re headed toward the period where there’s going to be no primacy in the Western Pacific, where it’s too dangerous for either of these two big powers to contemplate military conflict, and where the outcome wouldn’t just be horrible, which is obvious, but also highly uncertain for both of them.

Are there factors that might impede China's realization of its ambitions?

I place a lot of emphasis toward the end of my book on the cost of aging in Chinese society. The country's demographics are going to create social welfare costs at a pace and on a scale that the world has never seen. The Chinese state is going to face huge legitimacy tests with having just recently come to possess a pretty large middle class, who are known to be politically minded and politically active. The state is going to face a guns versus butter test where they will have to justify the expense of huge outlays toward constant military modernization in pursuit of superiority, or, on the other hand, taking care of this immense number of old people with all of the chronic problems that old people have. And because China has not built a social security program to any degree of robustness, I think the demographic change is going to be a powerful limiting factor to the country's aggressive pursuit of military power.