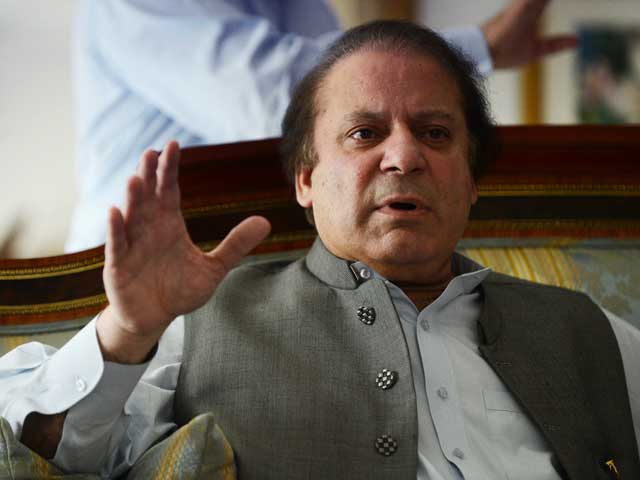 Pakistan's incoming prime minister Nawaz Sharif speaks to journalists at his farm house in Raiwind, on the outskirts of Lahore, on May 13, 2013. (Roberto Schmidt/AFP/Getty Images)

Saturday's elections will be remembered as an inflection point when Pakistan's history is written at the end of this century. In the run-up to the elections, religious extremists had vowed to violently disrupt the polls and choreographed spectacular attacks on liberal and secular parties to choke political campaigning. As Election Day drew nearer, whispers of a military intervention grew louder and the political grapevine focused on conspiracy theories all pointing in one direction: a last-minute delay in the elections, derailing Pakistan's fragile democratic project once again.

Despite serious allegations of rigging at certain polling stations, it appears that the biggest winner in Pakistan's elections was democracy itself. Fractured by religious, political and ethnic violence, democracy has never been able to take root in Pakistani society as routine military interventions in the name of protecting the "national interest" have disrupted the democratic project with an almost clock-like precision every ten years. Despite this multidimensional threat to democracy, the Pakistani people came together on May 11th, 2013 to vote in an election that marked the first time in the country's 66-year history that a democratically elected government will hand over power to another democratically elected government.

Defeating a last minute-surge of support for Imran Khan, former Pakistani Prime Minister Nawaz Sharif is now poised to lead the country once again as his party (PML-N) appears to sweep unofficial election results in the vote-rich Punjab province. It appears that PML-N's relatively better performance in government, coupled with genuine grassroots support for Sharif throughout Punjab, may have tipped these election results in his favor.

"The reason why Nawaz won is because his party has physical grassroots support and not just support from people on Facebook," says Hassaan Sherwani, a 28-year-old PML-N supporter from Punjab, whose Facebook newsfeed was inundated with status updates from Imran Khan's social media-savvy supporters. "Nawaz is the best man to lead Pakistan's economy out of its current mess," argues Sherwani. "Today, I'm planning to celebrate not just Nawaz's victory but also a victory for all of Pakistan."

Sharif's victory comes despite an electrifying campaign against the status quo by cricketer-turned-politician Khan, which inspired many young Pakistanis to vote for the first time in their lives. Khan's message of "change" and vision for a "new" Pakistan went viral on social media, encouraging even overseas Pakistanis to return home just to cast their vote.

"I'm not completely disappointed by the results," says Shozab Naqvi, a Khan supporter who flew to Karachi from Dubai just to cast his vote. "Imran will hold Nawaz's government accountable by forming a strong opposition, which will force Nawaz to deliver on the economy. A clear mandate for Nawaz means that he won't have to worry about coalition politics getting in the way of reforming the economy,” argues Naqvi, a banker by profession. "Nawaz will push on privatization and reform of government-owned enterprises and is likely to invest in infrastructure projects as well as negotiate a new package with the IMF."

It appears that in the choice between Khan's promise of "change" and Sharif's safer bet of "experience," Pakistani voters have leaned heavily towards experience. The promise of stability from Sharif's win coupled with the continuity of the "democratic system" sent the equity market at the Karachi Stock Exchange to an all-time high. The celebration appeared to reflect a broader view in Pakistani society that these elections represent a significant step forward in stabilizing a notoriously unstable country.