Growing Up Asian, Gay, and Religious 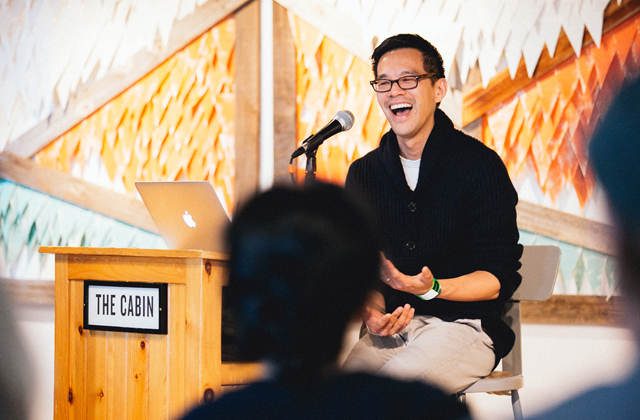 Jeff Chu has sometimes wondered if his homosexuality was a “ticket to hell.” Growing up gay in a Southern Baptist household, the reporter and writer questioned if his sexual orientation and religion were compatible. So in 2010, Chu embarked on a year-long pilgrimage to find out. The result was a book — entitled Does Jesus Really Love Me? — in which Chu recounts his cross-country journey visiting churches and meeting other gay Christians, including some of whom had abandoned the faith.

In celebration of LGBT Pride Month, Asia Blog caught up with Chu, who recently joined a seminary, to discuss why homosexuality became a “wedge issue” among Christians, his thoughts on religious political activism, and his visit to the controversial Westboro Baptist Church.

Your grandfather was a preacher. What are your memories of him?

In a lot of ways, he was a traditional Chinese man; a patriarchal figure. I don’t mean that only in the bad sense of the word “patriarch.” He did his best to look after his family and set a good spiritual example. A lot of my memories are from early childhood because he had a stroke when I was seven. After the stroke, he couldn't really speak all that well, but he could always pray. There was a part of his brain that knew how to pray even after he lost the ability to speak fluently.

Why do you think Christianity gained so much traction across Asia and within Asian American communities?

I don't think this is unique to Asia, but there is a liberating element in Christianity. When the gospel is preached a certain way, it offers people a way out of their traditional hierarchies. That's especially appealing to families like mine which were working class and lower class. It offered them a sense of hope and certainty that maybe they didn't get from traditional Chinese religion.

It's different in Asian American culture. In those immigrant environments, what you often crave most is a sense of community and like-mindedness. Church becomes a community center and a gathering place. Sundays become a time where you can come together, speak your native language, not worry about "American culture," and be with people who understand you in a way that broader society doesn't.

Out of the universe of perceived sins, homosexuality seems to be the most controversial among religious conservatives in the U.S. Why is that?

It's always easiest to target those sins that you don't suffer from yourself. But especially among Asians, there is a society-wide cultural conservatism. Differences are not appreciated. There is such a premium placed on family and procreation. There is such a premium placed on extending the family for sons like myself. You can see why homosexuality would run counter to that. It goes against so many traditional values. At that intersection of religion and culture, you get some really powerful forces that mean that equality for gays is a very difficult thing.

States have passed so-called religious freedom bills that effectively legalize LGBT discrimination. Do you see that as a cynical way for politicians to leverage religion or do you think those bills represent sincere concerns from religious constituents?

There are different motivations for different people. There are cynical politicians who use the phrase religious freedom in toxic ways. But I also think there are well meaning conservative people who are operating out of fear of what they don't know or understand and who genuinely think they are being persecuted. Even if I disagree with that, that doesn't make their motivation untrue.

During your book research, you visit the Westboro Baptist Church, infamous for its “God Hates Fags” protests. But your interviews with church members suggest that they believe anyone — not just gays — not in their church will go to hell and that their anti-gay rhetoric is just a media-seeking tactic. Would you agree that their beliefs on homosexuality are not particularly unique?

Their rhetoric is unique. They use stronger language. But one of the things that Westboro has managed to do is to give both liberal and conservative people a common enemy. It gives a lot of conservative people whose theology is not that different from Westboro's a way to say, "we're not like them, we're not as bad as they are." When, in fact, a lot of those conservative churches do more damage, for instance to LGBT youth. Most kids aren't growing up in Westboro, most kids are in other conservative churches where friendlier language is used to preach similar things.

In the U.S. today, religious political activism is almost exclusively associated with the Republican Party. Should progressive churches be more politically active?

I don't buy into the line that progressive churches haven't been politically active. A lot of churches already are — by ministering to refugees and by being affirming. Those are political acts as well as religious ones. I do think the evangelical movement and the Republican Party have been closely identified in recent years, but I don't think it's healthy for anyone religious, anywhere on the political spectrum, to align their faith with a party. There is a danger on both sides in doing that.

During recent pride events across the U.S., there has been a debate between those who affirm those events should exclusively be about LGBT visibility and those who want to bring in political and racial justice issues. What is your take?

It's important to recognize the intersections of our identities. I value those voices that remind us that, for instance, “I'm not just gay, I'm also Chinese. I'm not just Chinese, I'm also Christian.” I want spaces that welcome all of who I am, not just one label. Most of us identify in multiple ways, not just by our sexuality. I don't want things to be reduced in an unhelpful way.