Got a Grassy Field and Nothing To Do? How About a Game of Kabaddi? | Asia Society Skip to main content

Got a Grassy Field and Nothing To Do? How About a Game of Kabaddi? 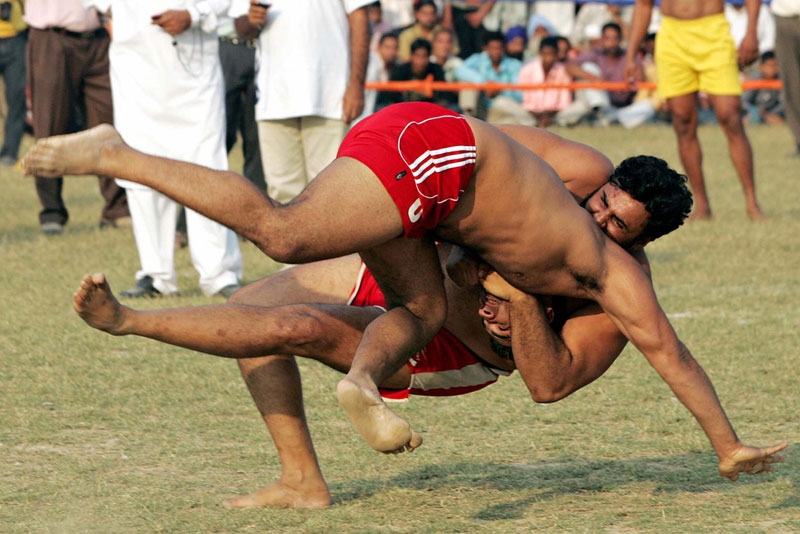 To South Asians, the word "kabaddi" is synonymous with wrestling — a Punjabi-style wrestling, where a bunch of dudes get oiled-up, or if it's really serious, oiled-up and lathered in mud, to basically play a game of rugby, without any shirts. The goal of the game is to tackle your opponent while chanting the word "kabaddi" over and over again, while holding your breath.

Originally from South Asia, the game has been around for over 4,000 years, and requires the physical strength of an NFL linebacker and the mental strength of a yogi. The result is chaotic, as many first-time spectators will confess, unlike any sport they've seen before.

Unfortunately, the game has a limited fan-following outside of the South Asian countries like India, Bangladesh, and Pakistan where it is played. Even within the subcontinent, kabaddi is seldom recognized as a legitimate sport, and is often excluded from major sport tournaments. Unlike cricket and hockey, sports widely played and watched in the region, kabaddi is homegrown, and not an import. Kabaddi players and organizers have been hoping to score a spot in Delhi's upcoming Commonwealth Games this October, but only a handful are hopeful the plan will go through.

But fret not, readers. If you're living in North America, there are few kabaddi matches still making rounds in Northern California, the New York area, and Canada. Just a few more weeks and the weather will not permit this shirtless sport, so click here to keep yourself updated with matches planned in your area.

Watch a kabaddi match below, or check out this New York Times slideshow.