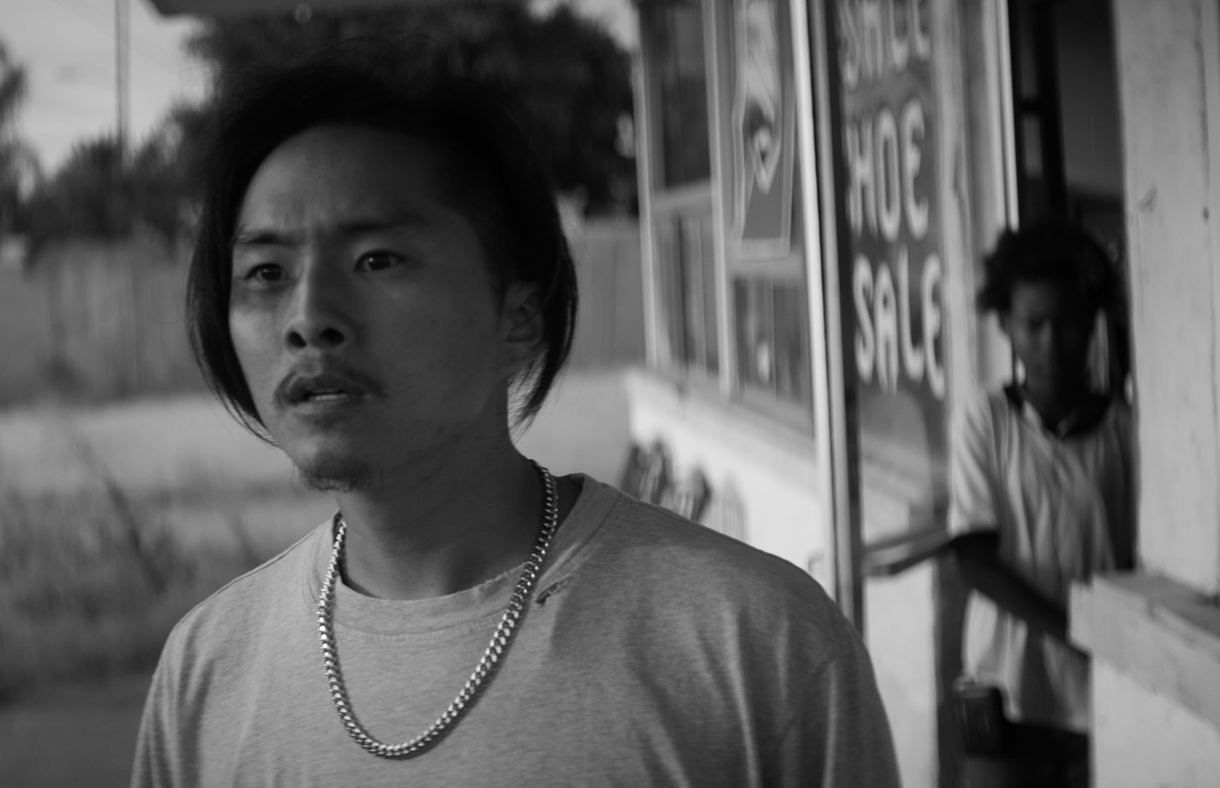 Justin Chon was 10 when his family’s store in the Los Angeles suburb of Paramount was looted during the 1992 riots. Following the acquittal of four police officers who had been videotaped beating unarmed African-American motorist Rodney King, violence erupted across Los Angeles. While traditionally presented as a conflict between the city's white police and black residents, the riots also highlighted tensions between the black and Korean communities. About half of the businesses destroyed in the riots were Korean owned.

Twenty-five years later, Chon’s film Gook presents a personal exploration of minority race relations, introducing a fresh Korean-American perspective to the familiar story. The film centers around two Korean-American brothers who run their late father’s shoe store in a predominantly black neighborhood and form an unlikely friendship with Kamila, a young black girl. After the car of Chon’s character Eli is defaced with the slur “gook,” he explains to Kamila that the word means “country” in Korean (guk) and that the United States is called "mi guk,” or "beautiful country." In this moment, Eli chooses to teach her the “beautiful meaning” of the word rather than perpetuate a cycle of hate by explaining its anti-Asian usage.

Set against the backdrop of the riots, Gook navigates the realities of these two disenfranchised communities, a process that has implications for our current political context.

Gook screened at Asia Society New York in July as part of the Asian American International Film Festival. A writer, director and actor, best known for his appearances on the Disney Channel, Nickelodeon, and in the Twilight films, Chon spoke with Asia Society Southern California before Gook’s August 18 release about tackling stereotypes, obstacles financing the film, and challenges for Asian Americans to create grassroots support for their own actors and writers. The conversation has been edited for clarity.

It’s been 25 years since the riots. Was your goal to tell an underrepresented story about that time? Or was it to present a commentary about our current era?

Both. I think it’s about introducing a perspective that’s not even a part of the conversation. The LA riots are such a black and white issue, yet Koreans financially lost the most. I think the intention of my film was not to be preachy but to represent Koreans and Korean-Americans in a very realistic way without any fantastical elements or stereotypes. I turn the stereotypes on their head, so you think you’re going to see the typical Korean store clerk, but then I humanize him. Basically, I just wanted to make sure that our perspective was represented in the conversation.

What Korean stereotypes did you want to turn on their head?

I grew up watching Menace II Society —  it was my anthem for a while. It was at the time when gang culture was big, and hip hop was changing from being a type of party music to more of a street, gang-affiliated type of music. I watched that movie as a young man and something resonated with me. But a huge plot point was that these black teenagers kill a Korean store clerk because he’s just not a very pleasant person. And it's funny — even though Koreans are portrayed that way, I still loved the film.

As an adult thinking about that film, I don’t get angry about it. My approach is more about critical thinking, and wondering why [the black characters] felt that way. There are a lot of racial conflicts in the film, but my objective is not to take sides. It’s about why these situations were even present. Why did these people feel that way? Why did Koreans go into [African-American and Latino] communities and not assimilate? There’s a lot of things to touch upon, and in my film, I don’t claim to give any answers to each group. Just empathy.

You filled the cast of Gook with people of color, yet you filmed it in black and white. What considerations went into those two decisions?

The biggest influence for this film was La Haine, (Hate) which was black and white. That was also set in ’92, revolved around a riot, had to do with police brutality, and was about three disenfranchised youth of different ethnicities. I totally related to it even though it was set in France.

When a film is in black and white, you can relax and stop picking the film apart if things aren’t period-perfect. Second, while there are people of color, symbolically there is no color in the film. Because I’m not showing the full-color spectrum, the audience focuses more on the relationships than the visual aesthetics. I wanted people to look at the relationships, and I think black and white really does help you focus on the things that matter to me.

Have you received any surprising reactions from Korean-Americans, African Americans or Latinos?

It’s been universally well-received. If you talk about race, it doesn’t matter what you’re saying — someone is going to have a problem. So going into Sundance I was hypersensitive and very prepared. But surprisingly, not a single person has had a problem with the film, whether African-American, Mexican-American, or Asian-American.

I will say I have gotten some criticism from older Korean men who think the title is really disrespectful. But that is I think naturally one of the reasons I made the film. They pre-judge it without even watching it. So my answer to them is: "Hey, why don’t you watch the film and we can talk."

Did having a cast of people of color make it challenging to finance the film?

Absolutely. Everybody I met wanted to inject a white character or wanted to cast rappers, which in a different film might make sense. But with [Gook] it just wasn’t appropriate. I was completely ready for that push back and challenge of getting it financed. I wrote the film to be very lean: There aren’t a lot of locations, special effects, or crazy camera movements. I raised the money privately, and funnily enough one of our biggest investors was French. Which was pretty disheartening because you would think the Asian community … You know, I just think it’s a slow process of us realizing how we can help one another, and I think we’re slowly getting there.

You’ve been a successful actor for many years. Are opportunities opening up for Asian-American writers and directors?

I can get in the room, but that doesn’t necessarily mean they’re going to finance my next film. I’m pitching something right now that is also Asian American-centric. But it’s tough. The challenges are exactly the same as I had with Gook. But that’s just from a business aspect, and I don’t blame [Hollywood executives]. They have a bottom line. They have a fiscal responsibility, so I get it. They want to help me. They want to find a way to finance my films.

But unfortunately, I think it starts with our own community. If we don’t support our own artists and our own content created by our own community, there’s no justification to studios or production companies. Why would you finance those films? Because the numbers just aren’t there.

We constantly talk about how Asians have the most spending power of any minority [group] or anybody in general. We consume. We eat out the most. We purchase the most movie tickets. Yet when an Asian-American film comes out, nobody shows up.

People complain about whitewashing, but my point is: Why are you trying to change a conglomerate? They have stockholders. They have the bottom line. They’re more worried about profits. It’s much easier to have a grassroots effect. We’ve seen that in the African-American community with Tyler Perry and in rap. Master P sold his company for millions of dollars and he started from selling CDs at restaurants. I just think it’s a process. It needs to start from the bottom-up. It’s easier from the bottom-up than from the top-down. 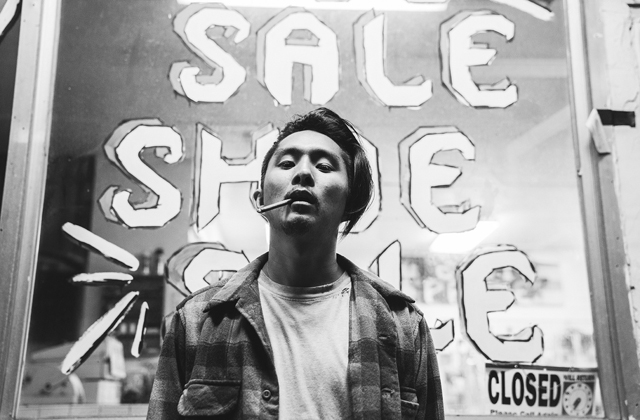 Is that happening for Asian-American filmmakers?

We really need to support our artists and develop them because the other complaint is that, well, there’s no good Asian content. Our white counterparts, filmmakers, get many, many chances to make many, many films. It would be insane to think that the first movie from any director is going to be amazing. It’s a craft like anything else. It takes time to develop. So if someone has a unique perspective and something to say, we have to give them a few chances. It doesn’t happen overnight.

The argument that we don’t have good content isn’t valid. We’re not financially backing these people, and they don’t get to practice. It’s also the same with actors. They say we don’t have good Asian actors. Well, guess what? Someone like Chris Hemsworth — how many box office bombs has he had? He's had a lot. But we don’t talk about the bombs. We talk about him playing Thor and how amazing that is.

Studio systems foster that. They nurture him as a star. That doesn’t happen with Asian stars, so we need to do that on our own. We need to foster these artists. We’re like that’s not our problem, and we don’t give them the shot or the support that they need, so I think that’s the intrinsic problem.

Gook has only a few women characters, and the men are portrayed as hypermasculine or extremely aggressive and volatile. What are you saying about Asian masculinity or the stereotype of Asian-American men?

In my work as a director, masculinity is a theme, but it doesn’t necessarily have to do with just being Asian. Hypermasculinity comes from not having the tools to express yourself. So in these communities, you’re taught to be hypermasculine because that’s how you survive. But we’re not equipped to actually sit down and have just a regular conversation.

In Gook, Eli (Korean-American) and Keith (African American) are the same character. They have the exact same situation dealing with a younger sibling. They both are orphans. They both are just trying to make ends meet. The statement I’m trying to make is that Asian men have a right to be angry, too. We just don’t see that often. I wonder how many times have I seen a film where an Asian guy has justifiable anger? I rarely see that. In my film, they’re pretty justified to be angry about their situation, as is Keith.

To go back to the other question about how African Americans take this film, I had several hour long conversations with Curtis Cook Jr., the guy who plays Keith, and we talked about whether or not I was perpetuating the stereotype of the angry black man. The conclusion we came to was: Is it justified? Is he angry for a reason or is he just angry at the system? He’s completely justified. There’s resentment and hate towards them, and he has every right to be angry in this situation. It’s not just because he’s just angry at "the man" (white establishment) because I think that is a stereotype.