The Gobi March: Seven-Day Footrace Through the Gobi Desert 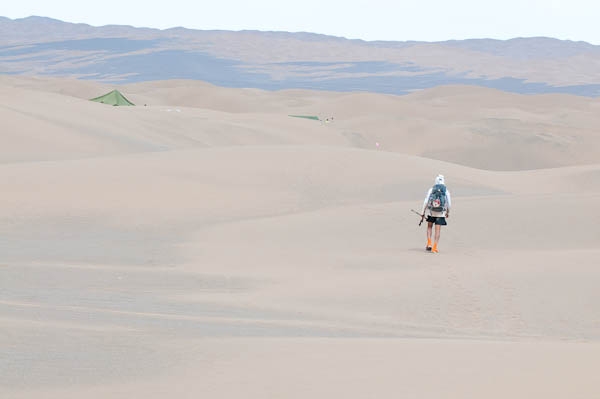 Next time you find yourself complaining about the summer heat, just be thankful you aren't trekking across China's Gobi Desert-a dry, rocky, sandy terrain that has been known to reach high temperatures of 50°C / 122°F.

Today, over 150 competitors in the Gobi March are doing just that, and they have two more grueling days to go before they reach the finish line.

The March is a seven-day, six-stage, 250-kilometer footrace that takes place across one of the hottest places on earth. The Gobi March is one of a series of four major footraces organized by an organization called Racing the Planet.

TIME Magazine named the Gobi March the #1 footrace in the world. It was also named one of the world's top ten endurance events. Participants mostly fend for themselves. The only assistance provided during the race is water, tents, and medical assistance. Competitors experience thirteen distinct indigenous cultures throughout their travels including the Ugyurs, Tajiks, Mongolians, and Kazaks.

However, the competitors aren't just in it for the photo-ops or the intense workout. This year, competitors will support over forty charities through their efforts in the Gobi March. One such competitor is Michael Dee, Asia Society Houston board member, who plans to partner with UNICEF to help build schools in a remote county in China to replace the schools that were destroyed in a recent earthquake.

You can read Dee's blog, which chronicles the daily highs and lows of racing through the Gobi Desert.

Click here to view a great slideshow of the Gobi March.