In a Glitzy City, Gruesome Conditions 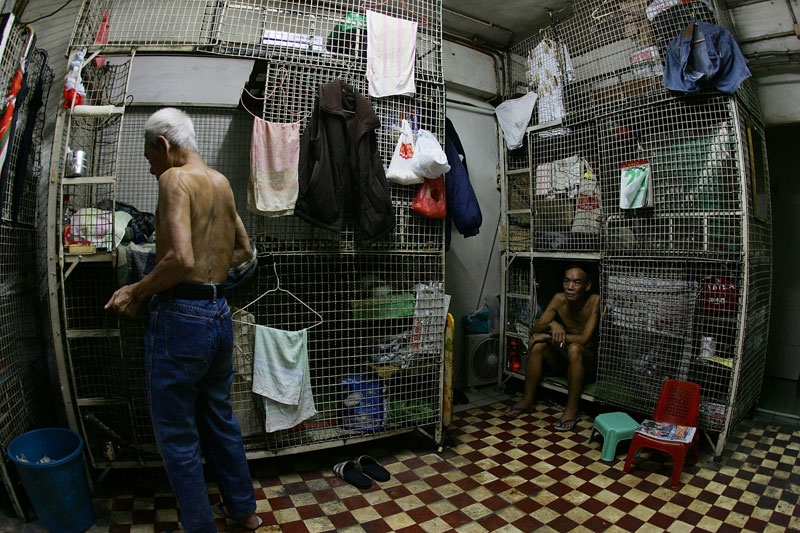 In a glitzy city like Hong Kong, where 18 of the world's billionaires reside, with more Louis Vuitton stores than Paris and London, and a higher GDP per capita than Switzerland, over 100,000 residents live in cages.

These slums in Hong Kong's sprawling urban center are dwarfed by surrounding sky scrapers. Suffocatingly small, an average 625 square foot area is shared by 20 residents, with one bathroom and a kitchen. Residents sleep in cages that are approximately six feet long, and two feet high.

Euphemistically, the government has approved of these housing situations, calling them "cubicle homes." Many have been forced into such conditions by the current economic slowdown. Many social workers complain that the government is doing little to help. However, to the government's credit, they are building new public housing - 15,000 apartments a year - a number miniscule compared to the 100,000 that are without proper homes.

Hong Kong's government is not elected through universal suffrage. The poor can vote, but their votes don't count because more than half of Hong Kong's politicians are appointed, further exacerbating the haunting living conditions of the city's partitioned dwellings.

When Special Broadcasting Service's Dateline documented these conditions last year, the government released a statement that said: "People choose to live in bed space apartments and cubicles because these apartments, apart from commanding a low rental level, are mostly conveniently located in the urban areas. Hence, there is still a demand for this type of private accommodation."