Gary Locke Advises Students: To Get a Job in 21st Century, Learn Chinese 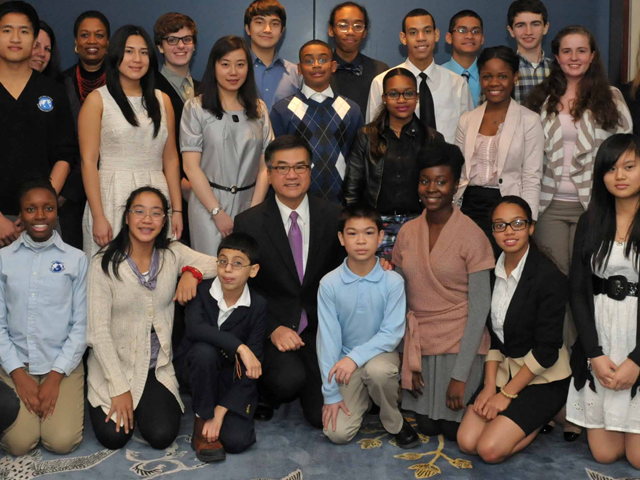 This week I watched as New York City teens talked about pirates.

They weren't talking about Robinson Crusoe in class. Nor was their conversation about the Pittsburgh Pirates, and it certainly wasn't about Captain Jack Sparrow.

The students came from seven secondary schools throughout the city that have an international studies focus, and they were all Chinese language learners. Their questions came as easily as their comfort in hanging out with a United States Ambassador.

"We're not going to be able to solve many of the world's problems unless China and the United States are working together," the diplomat explained. There are many international security issues that the United States and China work on together: the war in Afghanistan, non-proliferation of nuclear weapons in North Korea, and water security issues related to global warming.

The discourse about international affairs was important to the students, but perhaps more so was how they can make a difference in the world.

Isaac Guerrero asked about career pathways into a life of civic service, like the one Locke has chosen. Locke started out in law, and then went into local government. His advice to the students, however, didn't mirror his own experience.

"[In the 21st century], learn about history. Learn about culture, and language," he advised. "If you can speak Chinese or Spanish, you are practically guaranteed a job in your chosen field."

Ambassador Locke said that people of his father's generation often stayed in one job throughout their working lives. "The thing to understand," he told the students, "is that you have many possibilities throughout your life."

Beyond diplomacy, he encouraged students to follow their many passions, whether law or writing, dance or running a business. The key? "Get a good education."

"It's not so important to memorize things as it is to be able to analyze things," Locke said. He encouraged students to pursue deeper learning: ask questions, have an informed opinion, and be able to defend their positions. While he encouraged them to be strong in the humanities and sciences, he stressed that their ability to think critically would set them apart.

Hearing the many questions the students posed to Ambassador Locke — from heritage and identity issues to international relations — it's clear to me that these students are getting exactly the kind of education Locke urges them to pursue. They are able to raise good questions and express themselves clearly, and they are confident in their quest to learn more about the complex world around them.

In this interconnected world, every student should have this type of education. As Ambassador Locke said, with it, "you'll be set for life."