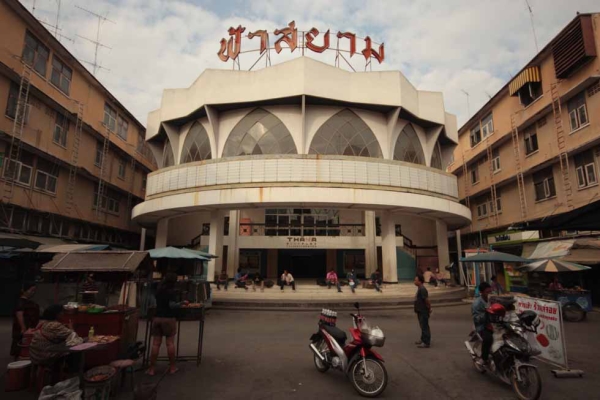 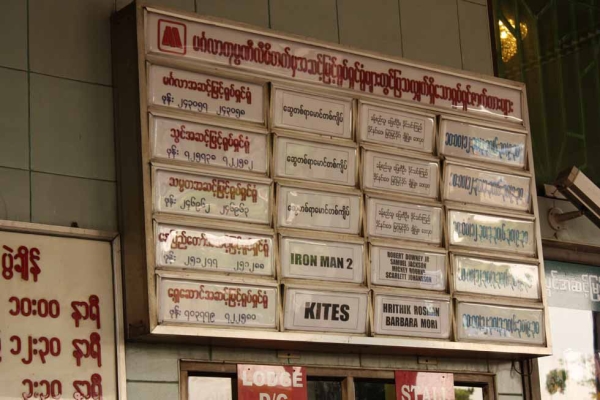 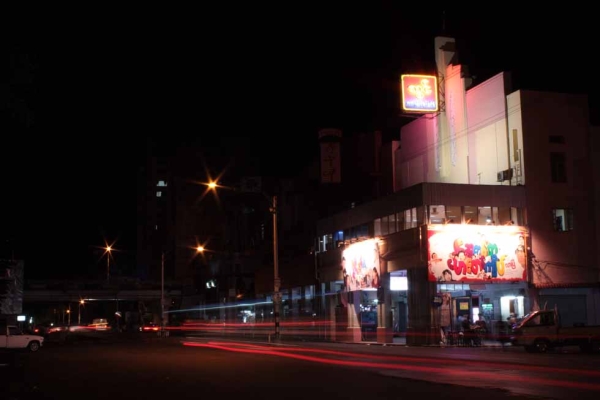 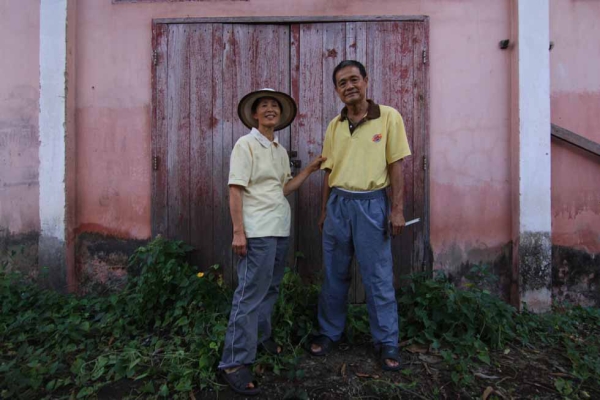 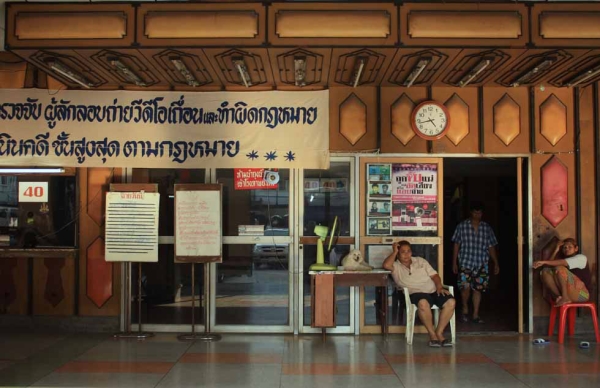 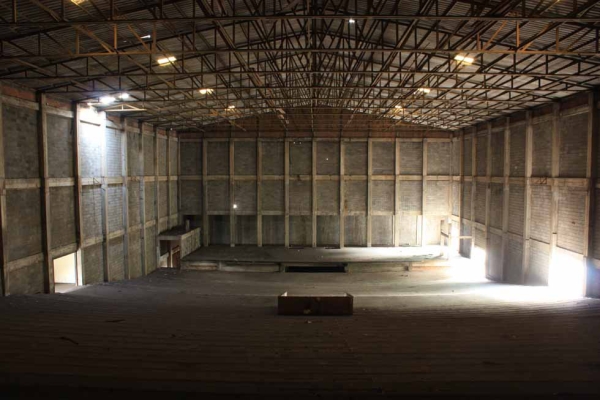 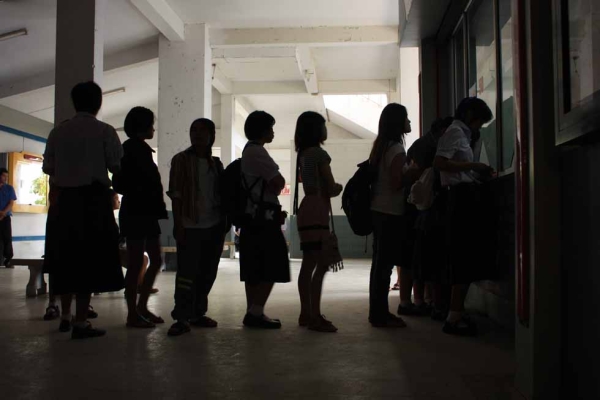 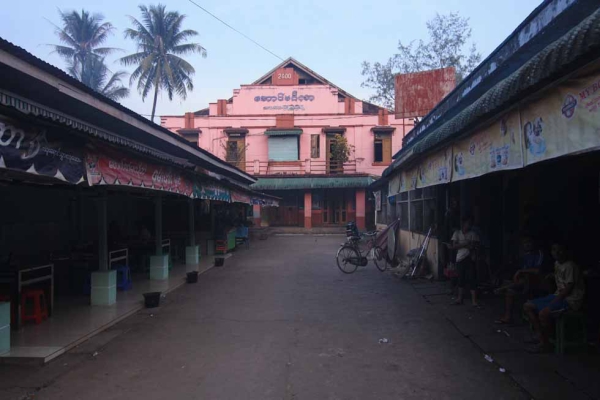 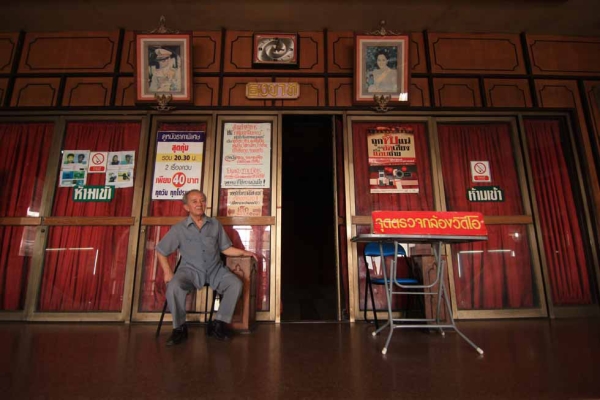 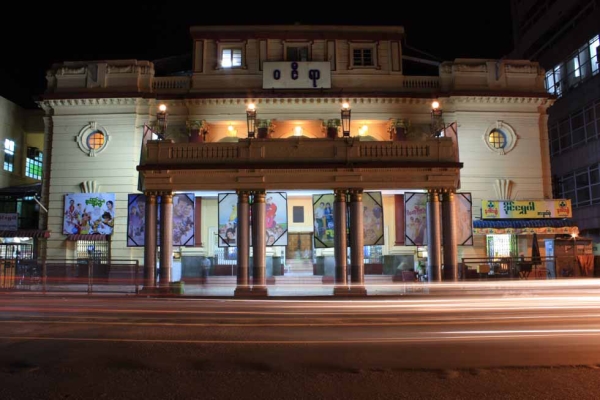 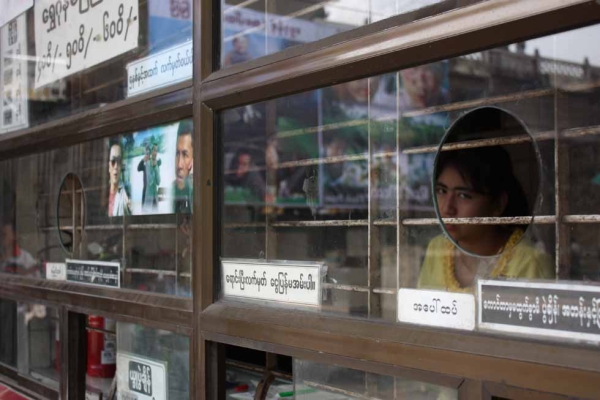 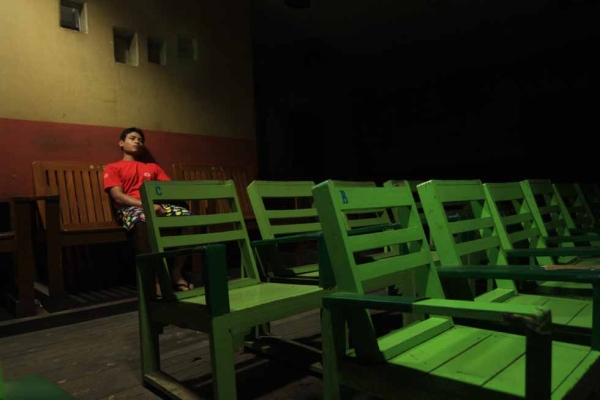 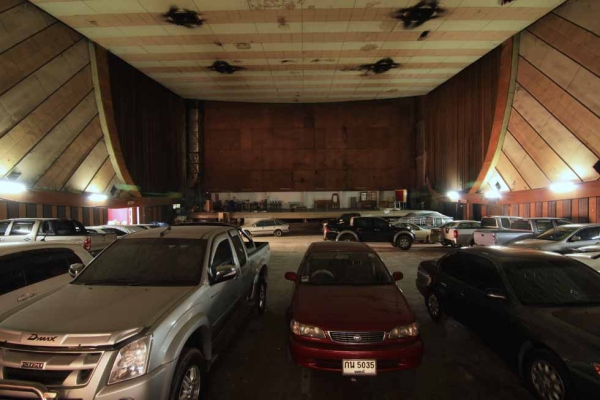 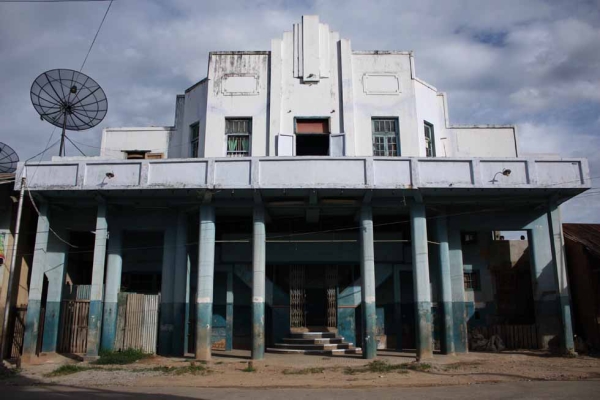 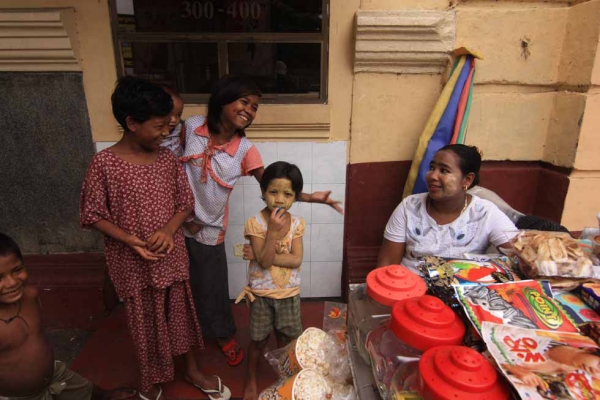 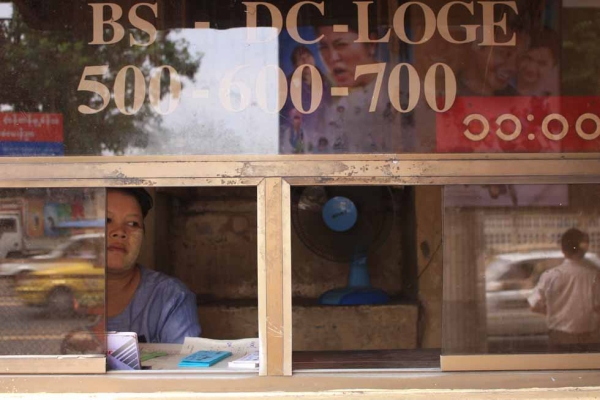 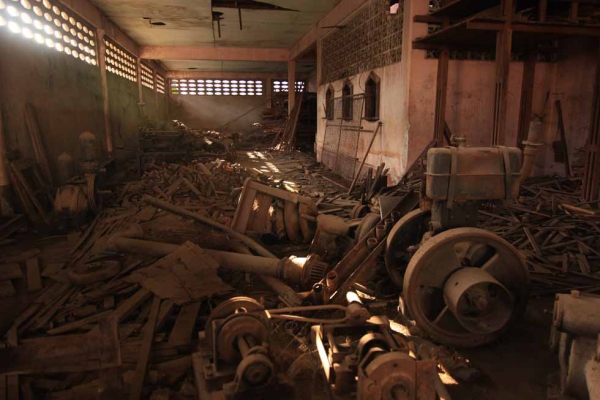 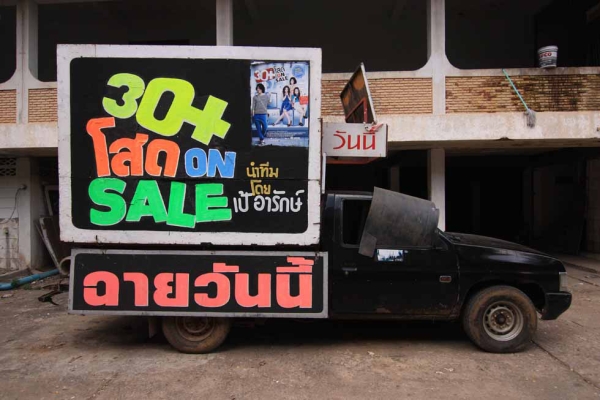 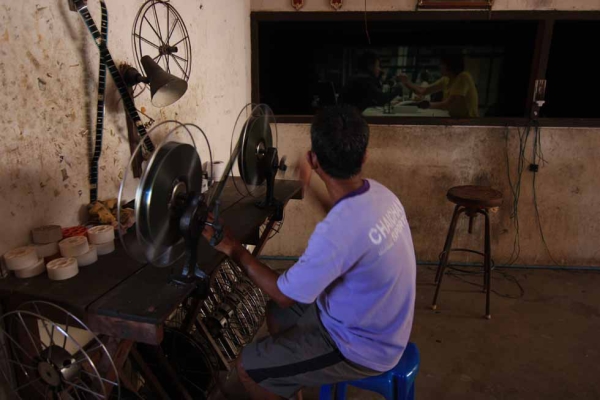 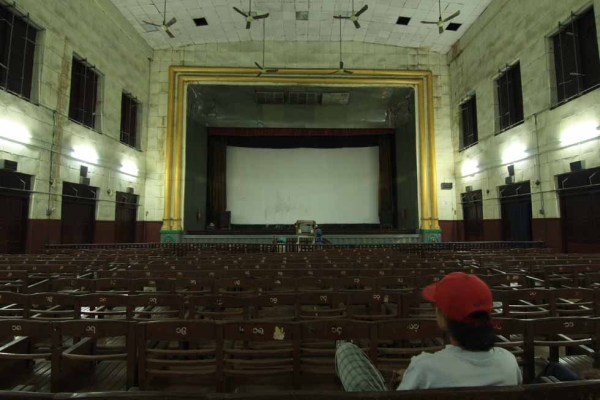 Working out of Chiang Mai, Thailand, documentary photographer and researcher Philip Jablon has been creating a photographic archive of stand-alone movie theaters across Southeast Asia since 2008 as part of his Southeast Asia Movie Theater Project. Through his evocative images and qualitative research, the Chiang Mai University graduate (who earned an M.A. in Sustainable Development in 2010) wants to cultivate an appreciation of these institutions in the hope of stimulating preservation efforts.

Stand-alone movie theaters were not only entertainment venues but also important social centers for the distribution of information and values throughout the 20th century in Southeast Asia. However, their numbers have now rapidly declined in the face of evolving technologies and changing socioeconomic structures and social mores (more recently, for example, movie theaters are built as multiplexes or inside shopping malls). At the current rate of attrition, it is possible that in just a few years such stand-alone theaters may cease to exist in the region.

When Jablon reached out to Asia Society to share one of his theater photographs, we were intrigued enough to ask to see more. The result? The gallery you see above. Jablon responded to Asia Blog's questions about his project via email.

What inspired you to pursue this project?

Old movie theaters have always held fond memories for me. My parents often took me to see movies at the remaining theaters in downtown Philadelphia as a child. By the time I became an adult, though, they'd all closed down. Still, I frequently thought about them and how much more of a lively city we had with those movie theaters right there at street level.

As a graduate student in Chiang Mai, Thailand, going to the movies served as a welcome diversion from the rigors of study. The only two theaters in town that I was aware of, however, were both located in shopping malls, which I always found stuffy and lacking in charm. Then one day I made a grand discovery. In a few of Chiang Mai's neighborhoods, old-fashioned stand-alone theaters were in operation. I made a mental note to go watch a movie at one of them, but by the time I got around to it they had all been demolished. New townhouses were being built in their place.

In my disappointment, I began to wonder what Chiang Mai must have been like when those neighborhood theaters were the primary means by which people consumed entertainment. I also began to wonder if their disappearance was part of a broader, nationwide trend, following Thailand's gradual rise to a middle-income country. After a bit of preliminary research, I found that it was. Mulling it over for a while, I decided that I would make it my mission to document Thailand's stand-alone movie theaters for posterity's sake. And so I began.

Every trip I took, I would make sure to ask around about old movie theaters. Sometimes I not only get pointed in the right direction, but am told impassioned personal missives about movie-going in decades past, or about the social life of the town in years gone by. Occasionally I learn nitty-gritty details about the role of a movie theater in local politics, or a story that reveals a larger picture of the town or neighborhood I happened to be in. The deeper I got, the more I fell in love with the work.

Before long I decided that I'd extend this work to other countries in the region. Southeast Asia has long been my academic interest. This project has provided a unique lens through which to view it.

How do you find the theaters, and is it difficult doing the research?

In Thailand, where I can speak the language, my methodology is pretty basic. When I arrive in a town, I simply ask around. In smaller towns, finding the old theater usually requires a little more than walking to the town center, where theaters were usually located beside other important social and economic infrastructures, like the market, for instance.

Once I locate one, locals often tell me where I can find others. Perhaps in a different part of town, or a neighboring district. Any reasonable-sounding lead is usually worth following.

In Burma, I've had a translator help me uncover more data. Laos, too.

As far as difficulty goes, yes, it's hard work. There's no doubting that. Traveling around from town to town on public transportation under the hot tropical sun takes its toll. So does walking around the towns. Sometimes I end up in blighted neighborhoods, where stray dogs or unsavory characters reside. Unhealthy places, covered in animal or bird feces, are common, too. But in the end, when I've made a beautiful photo of a movie theater that the world has forgotten, it's all worth it. At least I hope it is. 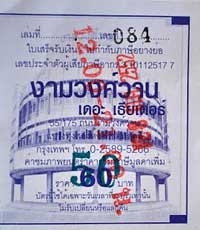 Why did you focus on Southeast Asia, and how do you select the theaters you feature on your website?

I was an Asian Studies major as an undergrad, but I focused specifically on Southeast Asia. The region has always held a certain allure for me. And it's relatively understudied, so there is much room to grow academically. There is great variation across the region: linguistically, culturally, geographically. Some Southeast Asian countries are developing rapidly, others not so much.

When I went to graduate school at Chiang Mai University, I hadn't planned on doing a project like this. But once it got started — and with Chiang Mai being basically at the center of peninsular Southeast Asia — I thought it would make sense to try to cover the entire region. It's a big chunk of land, but I've got a lot of energy.

Generally speaking, every theater that I encounter I photograph, research and write something about. The only criteria for being featured is that it has to be a stand-alone movie theater, not part of shopping mall or a big cinema complex.

I always try to tie each theater into a wider topic, be it about the place, a current national issue that may play a role, a historical anecdote — whatever seems most relevant and interesting.

Can you share some anecdotes from your search for these theaters?

As I've been doing this so long, I've come across many interesting stories. Here's one that I think best illustrates how far a little research into movie theaters can go.

I was in the central Thai city of Lopburi, home to Thailand's largest military base, when I found a very unique, very beautiful old theater. After asking around, I was led to an old lady who claimed she used to be an employee of the theater when she was in her 20's. Naturally, I started asking her about the theater's history, when it was built, what she remembered about working there, etc., etc.

She gave a very concise history of the theater, which was named "the Soldier's Theater." She explained that it was built in 1941 by the government of then-Prime Minister Field Marshal Phibulsongkram, who, it should be noted, modeled his governing style off of fascist governments in Germany, Italy and especially Japan.

Under Phibulsongkram, Thailand embarked on the road of militant nationalism. He wanted Thailand to become a modern nation, and constructed theaters like Soldier's Theater to spread his gospel.

As a Thai nationalist, Phibulsongkram also promoted a vehemently anti-Chinese-ness which swept through society. Ethnic Chinese in Thailand were scorned in the media, accused of fomenting communism and trying to undermine the Thai nation. Laws were passed to force Chinese to adopt Thai names and speak the Thai language. In general, life for the Chinese in Thailand became tenuous, even though the Chinese were contributing positively to Thailand's growth and development.

So as this elderly former theater employee recounted her working days to me, seemingly excited to get such a captive audience, she made a very revealing statement. "This great theater," she pronounced, "was built for the Thai army and for the Thai people. It was NOT like the other theaters, owned by a Chinese businessman. This one was for us and by us."

Suddenly, remnants of a 70-year-old nationalism made themselves known. For me, it was a true learning lesson. It marked the first time I had encountered a theater which had a direct link to a political philosophy, and from which an unfortunate sentiment from the past was conjured. I became immediately aware that there was more to these theaters than just entertainment, if you looked a little deeper.

What is the ultimate goal of the Southeast Asia Movie Theater Project?

I hope that my work makes people think more deeply about the older structures that comprise modern cities. New does not necessarily mean better. Especially in Southeast Asia, where urban redevelopment is happening at a rapid, almost unsustainable pace. Old structures and communities are being wiped out to build anew. While some of these redevelopment schemes are badly needed, some are done without taking the long view into account. Short-term needs are being accommodated without thought to the value of existing space. In many cases, that which is being destroyed now could very well comprise a future competitive advantage for the city if preserved.

What's certain is that the modernist movie theaters gracing Southeast Asia's cities, mostly built during the early and mid-20th century, will never be built again. But future generations of city dwellers may take a renewed interest in them, as has been in the case in many late-stage capitalist societies. Whatever the case, I hope that my work will ensure that there's always a high-quality record of their existence.