Gallery: Kimia Ferdowsi Kline Gets Back to the Garden in 'Chahar Baagh' Paintings | Asia Society Skip to main content

Gallery: Kimia Ferdowsi Kline Gets Back to the Garden in 'Chahar Baagh' Paintings 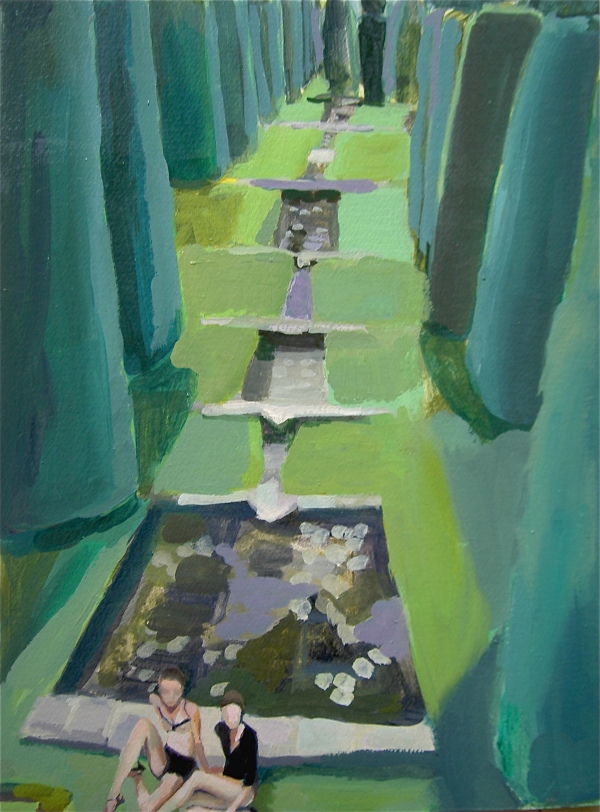 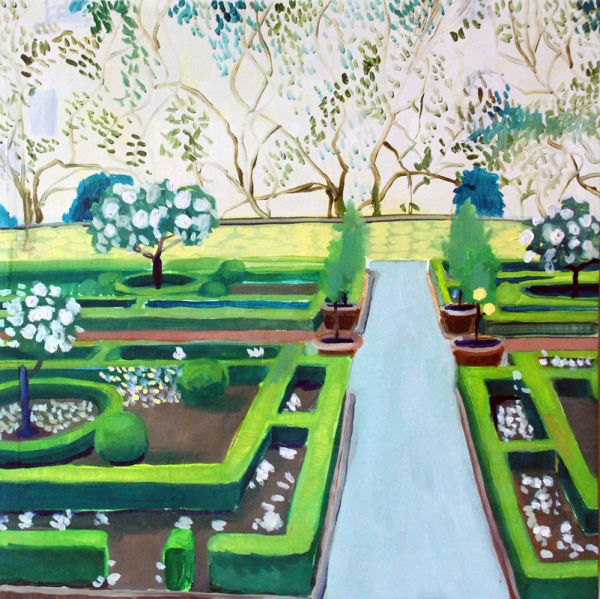 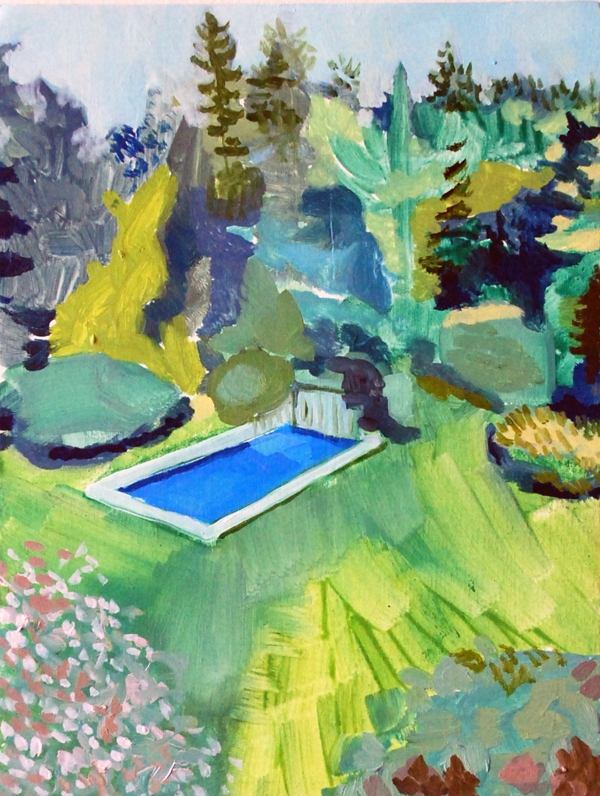 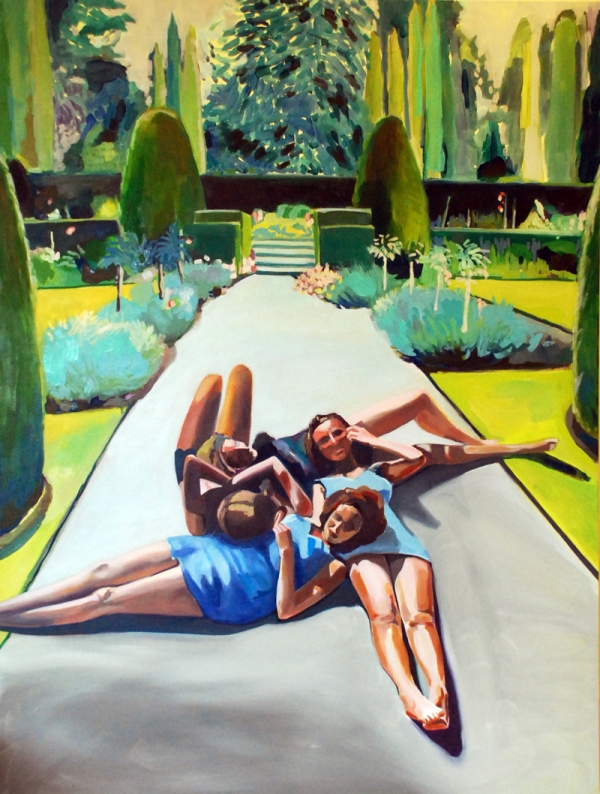 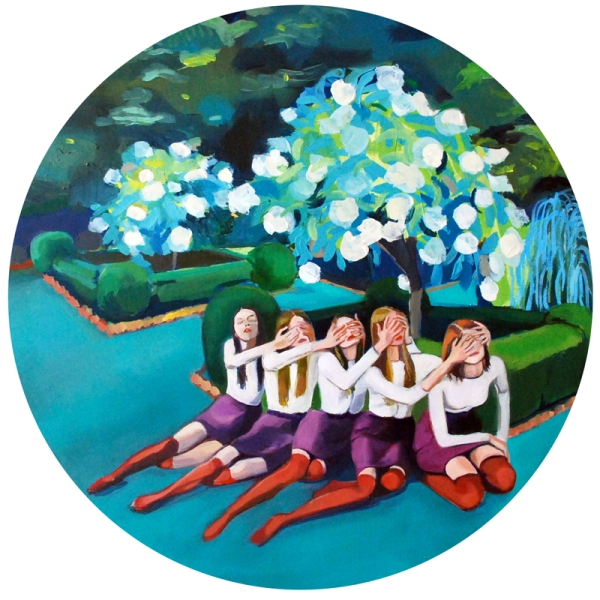 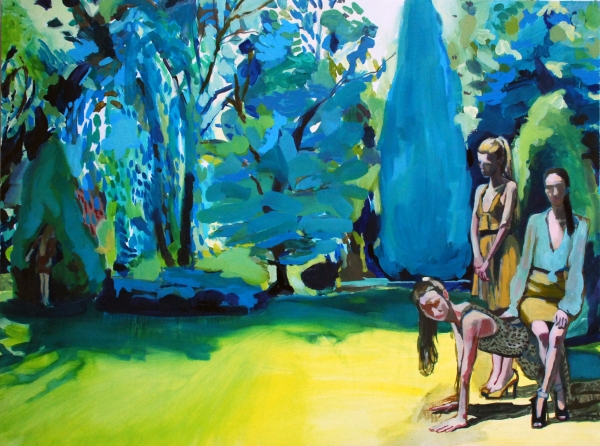 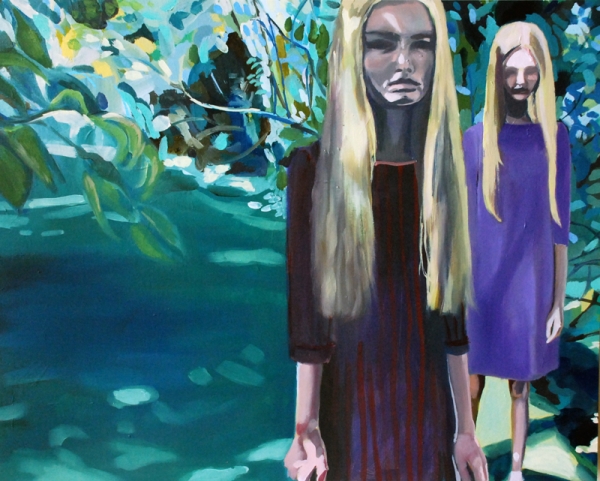 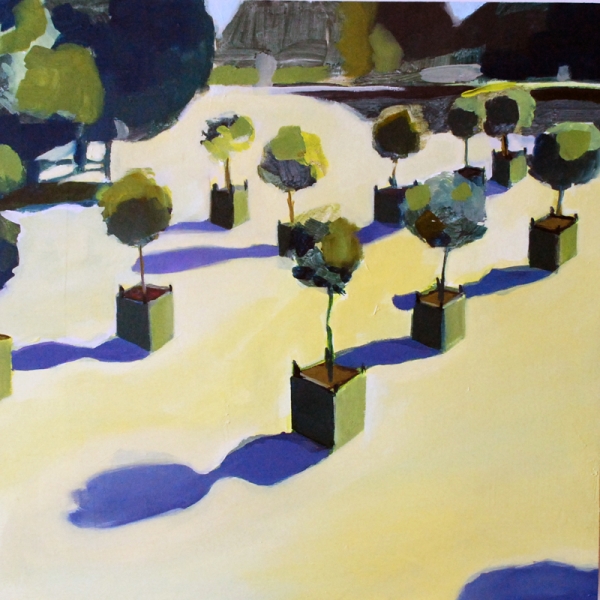 The relationship diaspora artists have to their identities often drips with nostalgia for a forgotten past homeland. Yet, increasingly, these artists are appropriating elements of their cultural roots to better understand their present conditions. For Iranian-American painter Kimia Ferdowsi Kline, whose Bahai family was exiled from Iran before she was born, her relationship with Persian culture is one that has always existed outside the borders of Iran. Last year, Kline lived in Madras, India, where she drew inspiration from the Mughal garden design known as the chahar baagh (literally, "four gardens").

The chahar baagh was imported to South Asia from Central Asia during the early Mughal period and is the layout for many famous sites, from Naghsh-i Jahan in Isfahan to Humayan’s Tomb in Delhi. The number four — sacred in Islam, and the number of wives permissible in Islam — dominates the plan of the chahar baagh. Pools of water, fruit trees and lush plants combine to symbolize the essential processes of reflection and growth. In Kline's appropriation of the chahar baagh in her new paintings, a piece of early Persian culture inspires a contemporary Iranian-American through its Indo-Islamic adaptation.

Kline's paintings investigate the garden's relationship to women and femininity, and the dichotomy between cultivated and natural beauty. She weaves model-esque women standing in stiff postures into the Mughal garden scenes. (Interestingly, many Mughal gardens and structures are currently undergoing mass restoration processes to remove the scars left by the British who manicured these lush organic environments.) In a sense, Kline not only reached for an imagined part of her heritage when living in India, but also for an imagined piece of South Asian history. Her adaptation of the chahar baagh invites the viewer to reflect on the rigidity of modernity as well as the natural beauty we often forego in everyday life.

Via email, Asia Blog gained insight into Kline's experiences in India and her relationship to her Iranian-American identity.

Your paintings have not always dealt with tropes that are so distinctly Persian. How did your experiences in India bring out your desire to work with Persian-inspired Indo-Islamic culture?

When my family fled Iran and sought religious asylum in the United States, our last name was blacklisted, and to this day I am unable to go back without the threat of arrest and imprisonment. The fact that I've never seen or experienced Iran makes creating artwork about it really difficult. It's not that I haven't wanted to, but there's a cultural and visual amputation that I've undergone in relation to my country of origin, and that's obviously hindered my ability to translate this piece of my identity into art. My mentors pushed me to make work about my "cultural heritage," but I consistently resisted. How could I possibly make a visual image about something I'd never seen?

My work is generated from firsthand experiences, and until living in India, my experiences were mainly defined by being a minority in the American South. India is the closest I've ever physically come to Iran, and as I traveled throughout the country, particularly the North, I began to see and experience Iran's lasting influences on the region. The two cultures and their histories are intricately intertwined, and the experience of living there finally gave me the visual and emotional resources needed to produce work in response to my Persian heritage. The chahar baagh felt like an ideal starting point to begin this visual relationship with Iran.

Kline's Chahar Baagh exhibition opens on June 23 at Gallery Simin in her hometown of Nashville, Tennessee.