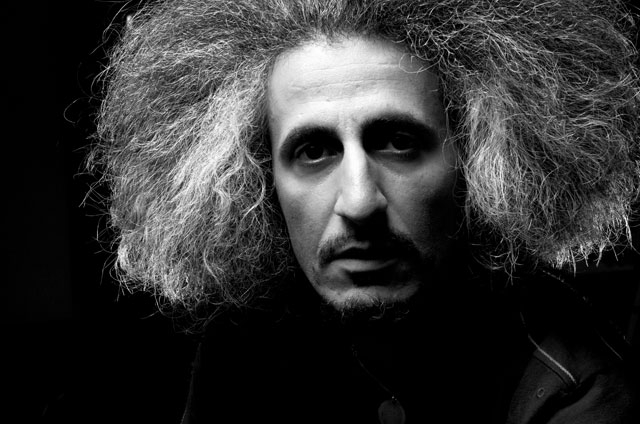 Asia Society Museum's landmark exhibition, Iran Modern, which opens Sept. 6 in New York, focuses on Iranian art created during the three decades leading up to the revolution of 1979. Learn more

Asia Society New York's concert with Iranian singer-songwriter Mohsen Namjoo this Saturday, September 7 is now officially sold-out. But if you didn't manage to get a ticket, there's good news: the show will be a free live webcast on AsiaSociety.org/Live at 8 p.m. New York time.

Many forms of pop music have been prohibited in Iran since a more conservative government took office in 2005. Namjoo — a maverick who mixes Persian classical traditions with Western styles like rock and jazz — hasn't been allowed to perform or sell his CDs publicly in his native country. Though he now lives in the U.S., Namjoo has won a wide following in Iran nonetheless, through private concerts, black-market CD sales and YouTube videos. An advance notice of Saturday's concert by New York Times music writer Jon Pareles hailed Namjoo as an artist who "prizes allusive poetry and musical exploration above politics."

For those who are curious to learn more about Namjoo's life and work, a 2007 New York Times profile offers some helpful context, and he was also interviewed last month by NPR's Weekend Edition. In that talk (embedded below), he discusses life in exile, gracefully shrugs off the "Bob Dylan of Iran" comparison, and provides some evocative snippets of music.

Mohsen Namjoo's Asia Society concert and talk are part of a season-long focus on Iran presented in conjunction with Asia Society Museum's exhibition Iran Modern, opening September 6 and on view through January 5, 2014. Namjoo's appearances are also part of Asia Society's ongoing initiative Creative Voices of Muslim Asia, made possible by support from the Doris Duke Foundation for Islamic Art. Additional support for Iran Modern programming is provided by the Robert Sterling Clark Foundation and the American Institute of Iranian Studies.