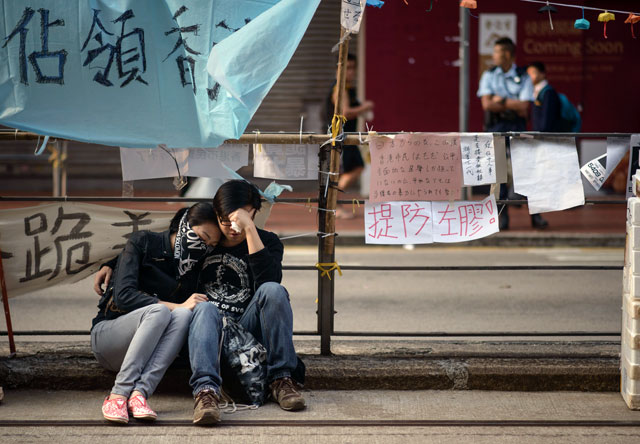 Hong Kong pro-democracy protesters sit together on a curb after police removed most of the barricades surrounding the area they were occupying in the Causeway Bay district on Oct. 14, 2014. (Ed Jones/AFP/Getty Images)

In light of the continuing protests in Hong Kong, and ahead of Asia Society Northern California's upcoming (October 23) event on the future of democracy, ASNC reached out to distinguished author Francis Fukuyama, the featured speaker at the October 23 event, for his perspective on the pro-democracy demonstrations in Hong Kong and the pursuit of liberal democracy in the region.

Last spring, you said in an interview that China poses a challenge to liberal democracy but not necessarily a threat. Would you say the same today, after the summer's tensions in the South and East China Seas and the current conflict in Hong Kong over local autonomy versus control by Beijing?

I think that there is a significant chance of a military confrontation in East Asia. The level of nationalism in China, Japan, and South Korea has risen alarmingly in the past couple of years. I'm sure that none of the leaders of these countries will rationally choose conflict, but they may find events on the ground difficult to control. The problem is not one of these little islands, but the larger symbolic issue of who is the dominant power in East Asia.

Will the latter conflict continue — if not in Hong Kong, then in Xinjiang, Tibet, or even Taiwan?

I think that all authoritarian leaders are today very much attuned to the danger of new color revolutions of the sort that occurred in Ukraine or Egypt, and are determined not to let these get out of hand. I don't really see Xi giving anything to the Umbrella Revolution given his assertion of authority in the PRC itself, so I have great fears about the final outcome of this struggle. People in other parts of China will be encouraged should the students in Hong Kong succeed in winning concessions, and I suspect the Beijing leadership is fully conscious of this fact. Xinjiang is developing in a much more violent direction and will continue to boil away from the eyes of the international press.

You argue that China's political model is unsustainable because the rapid economic growth that the regime has promised in exchange for consent cannot last, and because the rising middle classes will make political demands that the regime cannot deliver. Is this partly what we are seeing in Hong Kong today? What do you see as China's future: refinement of the existing system, adoption of something like liberal democracy, collapse, or something else?

At the moment from all indications the Chinese middle class is relatively content with the CCP, since they have prospered under it. They would like a more open society in terms of information access and personal freedom, but I'm not sure they would want one-man, one-vote democracy too soon. All of this could change, however, when China's growth slows, as it inevitably will, and when they see their own opportunities for personal advancement blocked by favoritism and corruption.

It is very hard to predict future scenarios for China. From my standpoint, the optimal one would be for the CCP leadership to introduce a spreading rule of law and eventually come to accept real constraints on their own behavior, followed by a slow opening of the political system. This might start as intra-party competition at first, or the devolution of more genuine authority to local political units. But this gradualist scenario could be upended by any number of shocks, such as a rapidly slowing economy. And it is not clear that the current leadership has any intention of accepting more constraints on its own behavior. 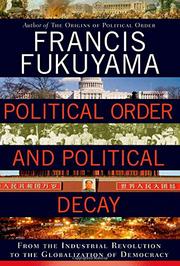 In contrast to your early works, Political Order and Political Decay talks a lot about decaying liberal democracies, especially in the U.S. — because of rising inequality, ineffective governance, and an increasingly sclerotic political system where checks and balances are hardening into gridlock. If the Chinese model is unsustainable and the U.S. is in decline, how can we believe that one is more stable than the other? Where will we be 50 years from now?

In a sense the real question about sustainability has to do with the system's ability to accept change. We believe that democracies are better at this because they can vote to remove bad leaders, but are often stuck in gridlock as we currently are in the United States.

China has a very different problem, which the Chinese have traditionally understood as the problem of the "Bad Emperor." A good emperor can do great things — consider the changes undertaken by Deng Xiaoping — but a bad emperor can do much more damage than in a constitutional democracy because there are no checks on his power. Xi is currently setting himself up as one of the most powerful emperors in recent years, and we have no idea at this point whether he will be a good or bad one. This is the huge risk for this kind of system.