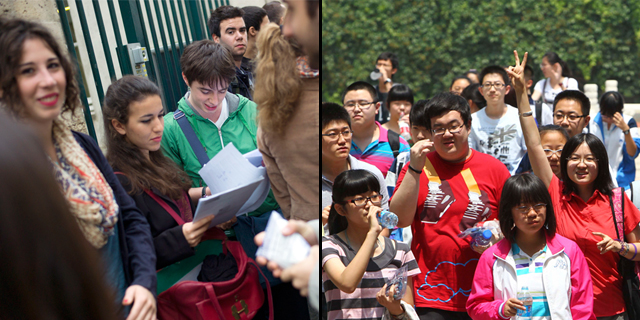 Left: French students wait prior to work on the philosophy test as part of the baccalaureat (high school graduation exam) exam on June 18, 2012 at the Lavoisier high school in Paris. (Fred Dufour/AFP/GettyImages)
Right: Chinese students leaving after finishing the first day of the tough college entrance exams, or gaokao, in Beijing on June 7, 2012. (STR/AFP/GettyImages)

On June 19, Xu Jilin, a professor of history at East China Normal University in Shanghai, posted these questions on his Weibo account. They were drawn from France’s baccalauréat, the test French students must pass to pursue higher education. They came from Philosophy sections of the versions of le bac taken by Humanities and Science students, respectively. Xu posted the questions in an effort to cast an unflattering spotlight on China’s own university entrance exam, the gaokao, the results of which were released between June 20 and 26, depending on the province.

Xu wrote, "No wonder France has so many philosophers while China only produces plenty of test-takers." In a later interview with the Shanghai-based Oriental Morning Post, he said that he had been shocked by the questions when a student sent them to him and decided to share them with others, who might also find them thought-provoking.

But Xu may not have expected his post to be retweeted over 30,000 times and to become one of the most talked-about topics on the Chinese microblogging site. Many Weibo users, like Xu, were amazed by the simply stated yet philosophically profound questions. One user, @Camera_Buff, said, "I want to worship them. Even a PhD student in China may not be able to figure out a decent answer." @俺不是阿童木 praised the exam for ensuring that "everyone has at least something to say in the essay while no two students end up talking about exactly the same things." Others expressed their admiration for Europe and its education system. @ryanjordan commended France as "a land that seeks the truth” while @非明镜 wished he "could study in a high school like that."

The exam questions also attracted the attention of public figures, including everyone from intellectuals to CEOs. Chow Po Chung, a professor of political science at the Chinese University of Hong Kong, stated that "At least, you won't starve in France with a degree in political philosophy." Zhang Xin, CEO of SOHO China, the largest real estate developer in Beijing, drew on her own experience in Europe: "The European education system emphasizes humanities and philosophy because of the influence from the ancient Greek culture. I found that philosophy was a compulsory subject for all the humanities students when I was studying in the UK."

What is noteworthy about the discussion, however, was the way it energized an ongoing rethink of the Chinese education system, which has long been attacked for advocating exam-oriented rote learning and downplaying critical, independent, and creative thinking. Xiong Peiyun, a scholar and social commentator, expressed his sympathy: "Compared with French students, Chinese students are pitiful because the vast majority of them are spending the most precious years in their lives learning pseudo-knowledge by rote that could have a lifelong adverse effect on them." @琥珀-邱 pointed out the deleterious consequence of China's disregard for individuality, arguing, "China's education is like filling people into the same mold and leading everyone in the same direction ... They [students in other countries] can explore the world using their own thoughts and actions. We can only learn about the world through others' words because we're passively receiving all kinds of ideas all the time."

So what is missing in China that has generated the wistful longing for an education overhaul? Are people yearning for a curriculum focusing more on subjects like philosophy or an exam with more open-ended questions and thus more flexibility?

In fact, philosophy has always been integral to China's high school curriculum as part of a course called political education. But the course, as its name suggests, is highly political, offering only a trimmed version of Marxist philosophy blended with the teachings of China's political leaders, for example, Maoism and the Three Represents. Thus, it wouldn't be hard to understand the humor of @张马丁 when he quipped, "So they're not tested on their knowledge of Capitalism with French characteristics and de Gaullism? And "would we be freer without the state'? How dare they ask that question?" @伤寒玛丽, a graduate student studying philosophy, wrote, "Words like work, reason, truth and freedom also come up in China's philosophy exams but they're nothing more than words. Their inherent explosive power has been neutralized by rigid definitions, monotonous repetitions, sophistries disguised as dialectics and banal instructions telling you to 'please answer the question using real-life examples.'" Others like @欣水纪湘2011 claimed that the fundamental problem lay in people's mindset. She said, "Many Chinese regard theoretical courses like philosophy as the most useless and boring courses. It is pathetic that utilitarianism pervades all aspects of society, including education. A well-rounded education requires not only a comprehensive command of knowledge and skills but the free growth of mind."

On the other hand, open-ended essay questions, not unlike philosophy, seem familiar enough to Chinese students. Skeptics need to look no further than the annual gaokao, the Chinese college entrance exam. The essay questions in the Chinese language and literature test are its centerpiece and never fail to ignite a public debate each year. Students are usually asked to write an essay of 800 words or more on a topic given in the form of a statement, a parable, a poem, or even a word. Although the number of students taking the exam has dropped by 1.4 million since 2008, interest in the essay questions has not dwindled. Different provinces take different versions of the test. The following are four of this year's 18 variations:

Whether the father has mens rea is probably not what the examiners expected to read in students' essays. The problem, though, is that few people seem to know what to make of these perplexing, if not unfathomable, questions after all. Xu Zidong, head of the department of Chinese at the Lingnan University, said in an interview with the People's Daily on June 7, "The topics are too literary and narrow. As a professor of Chinese, I have no idea how to approach many of them. I feel sorry for the students."

As many were scratching their heads and trying to decipher the cryptic gaokao, the baccalauréat came as a wake-up call. @兔主席, whose real name is Ren Yi and is a graduate of Harvard’s Kennedy School of Government, wrote about the gap between the two education systems: "It's wonderful that students can choose from three topics. They can choose a social, philosophical, or ethical topic that closely relates to real life and answer the open-ended question however they want. I guess the grading criteria are the breadth, depth and logic of their argument. This requires systematic training in philosophy and thinking. This doesn't exist in our system. We remain at a stage when we depend on the essay-writing portion of our language and literature classes to teach analytical skills." @oakman put it more bluntly when he said, "Three hundred years has passed for both China and the West in terms of physical time since the Enlightenment. But considering our reasoning skills, we're in the pre-Enlightenment era — just look at our education system."

Probing deeper, some Weibo users concluded that the imperfect education system was the product of political interference and manipulation. @Sevilchology asked, "Given that philosophy is taught in political education classes, how can we produce philosophers if we're forbidden to discuss politics publicly?" @石讷 wrote, "Thinking skills are cultivated in a normal society but uprooted in a hijacked country." @fleurmom agreed by saying, "Only model answers count in China, not independent thinking. Otherwise, how can they ensure that everyone thinks in the identical way?"

Others simply felt nostalgic about the good old days when the Chinese wouldn't envy the baccalauréat. Bei Cun, a celebrated writer, recalled, “When I was a student, my professor only gave me one exam question: Can we grasp beauty with reason? China's college education is indeed not as good as before." @八里桥边 commented jokingly, “Actually, some of our previous exams were really creative — I mean those before 1949." The discussion even evoked admiration for the imperial examination, a system to select civil servants on merit used in China for 1,300 years until its abolition in 1905. @有竹居主人刘强 wrote, "The imperial exam tested candidates on their knowledge of philosophy ... That's why ancient China produced so many great philosophers." But @二代症久富田 took a more pessimistic view, saying, "China has been a slaughterhouse for thinkers since ancient times."

Despite all the criticism, some users doubted whether there was even anything that Chinese educators could learn from their French counterparts. @heloaha argued that the two exams shouldn't be compared because of their different contexts. Huang Lijun, a journalist with Shanghai's First Financial Daily, pointed out what people saw might not be the whole picture. He said, “The questions are intimidating but I don't know if the scope of the exam is predefined or sample questions are provided beforehand ... If yes, I'm sure Chinese students could turn in perfect essays after thorough preparation." @蓝花青 defended the gaokao, writing, "Frankly speaking, I like the gaokao better because it has model answers. There are so many students in China and competition is fierce. I'm not some rich kid with powerful parents, but I was able to go to a good college simply because of my gaokao score. If the gaokao questions were so flexible, I'm afraid I wouldn't have stood a chance — people would use their connections to land themselves a spot in college."

The gaokao may be the best system that China has for the moment, yet that doesn't mean that people cannot consider the advice of @正义的小队长: "We need to complain less and reflect more. A 15-year-old French girl would keep The Myth of Sisyphus by her bed. How many of us do that?"

Bi Cheng is an MA candidate in Conference Interpretation at the Monterey Institute of International Studies. He has worked for China Economic Review and Modern Weekly and his current career goal is to become a professional conference interpreter.