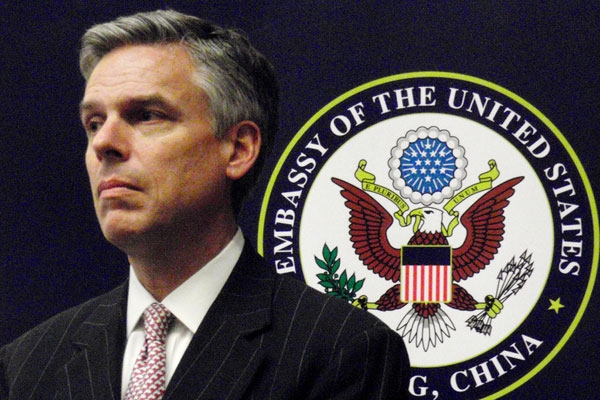 Former Governor of Utah Jon Huntsman — most recently the U.S. Ambassador to China under President Barack Obama — has officially announced that he is running for the Republican presidential nomination. Will China experience help his bid? Orville Schell, Arthur Ross Director of the Asia Society's Center on U.S.-China Relations, weighed in on the topic in a story written by Robert Zeliger on Foreign Policy's Passport blog.

He continued, "He is a very smart guy, quick on his feet, and he has a certain candor. We'll see if that remains when he starts campaigning."

Huntsman's fluency in Mandarin Chinese (he was a Mormon missionary in Taiwan) endeared him to Chinese people, Schell said: "He would go out in front of Chinese audiences — he was a bit of a trained bear act. The Chinese adore anyone who can speak Chinese."

But, according to Foreign Policy's Zeliger, this good favor may have waned toward the end of Huntsman's stay in China. He was caught on video at a planned pro-democracy protest outside a Beijing McDonald's. While critics viewed the Ambassador's appearance as a sure sign of his presidential ambitions, Huntsman claimed his presence was "purely coincidental." Nevertheless, following the incident Huntsman's name was reportedly censored on Chinese search engines and websites.

At his final public talk in China, Huntsman criticized the government's treatment of dissidents Liu Xiaobo and Ai Weiwei, and he has since been vocally critical about China.

Considering Huntsman's changed attitudes on China and his backpedaling on some other issues, Zeliger asks a question: Could he have been setting himself up for a White House run by burnishing his bona fides on human rights issues and pushing a get-tough message?