Is the Food You're Eating Really Authentic? | Asia Society Skip to main content

Is the Food You're Eating Really Authentic? 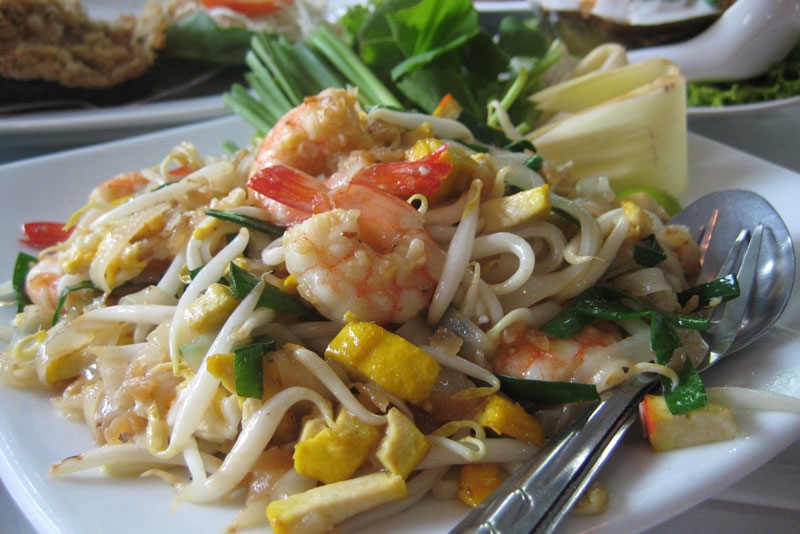 Here's a post you'll probably enjoy reading because it's about food. Delicious, Asian food. But think about it: Is the food we enjoy from Asia really even from Asia?

Fact: Americans love Pad Thai, perhaps Thailand's most famous ambassador and culinary export to the Western world. But, Pad Thai is also incredibly misinterpreted. For starters, the dish is called "phat thai," where phat means "to fry." Now you know. But both in America and many parts of the world, the noodle dish is twisted into variants that have little to do with the original creation.

In Thailand, phat thai is made from a handful of good-quality rice noodles that are stir-fried with indigenous ingredients like fish sauce, and almost always made with shrimp. Only to cater to the Western palate did Thailand's famous dish extend its meat additions. In its most basic form, the noodles are sprinkled with dry shrimp, tofu, a whole fried egg, and some scattered Chinese chives and bean sprouts. But believe it or not, even phat thai is also essentially a foreign dish. It was only after the Chinese introduced the concept of stir-frying to the Thai that this popular dish was created. Aren't you glad they did?

Speaking of the Chinese, next time you are in the mood for some Chinese food, try ordering outside the box. Americanized Chinese food (think General Tso's chicken, sesame chicken, Hunan chicken) is almost largely unknown in China. Only did dishes first gain popularity when New York Times mentioned the Szechuan-style of cooking in the late 1970s. Peng's Restaurant on 44th Street in New York City was allegedly, the first to serve General Tso's chicken. But step outside the United States, much of the Chinese food we eat will likely raise brows and confusion.

Don't believe me? Crab Rangoon, a popular appetizer that makes any Chinese food meal incomplete if skipped, is native to the West. Cream cheese, like other cheese (with the exception of cottage cheese) is essentially nonexistent in Southeast Asian and Chinese cuisine.

Another popular and mouth-water (sweltering) dish is India's famed Chicken Tikka Masala. A dish made of chunks of roasted chicken (tikka) served in a spiced creamy tomato sauce. The origins of this dish are disputed. Some experts say that the dish originated somewhere in the Indian state of Punjab in the last 50 years, but most others say that it originated in the first Indian restaurants in London's popular district, Soho in the 1970s. Despite its questionable authenticity, chicken tikka masala is arguably Britain's true national dish.

What are some of your favorite foods from Asia? If you feel your dishes are authentic, share them with us below. For recipes from across Asia, take a look at Asia Society's extensive list here.