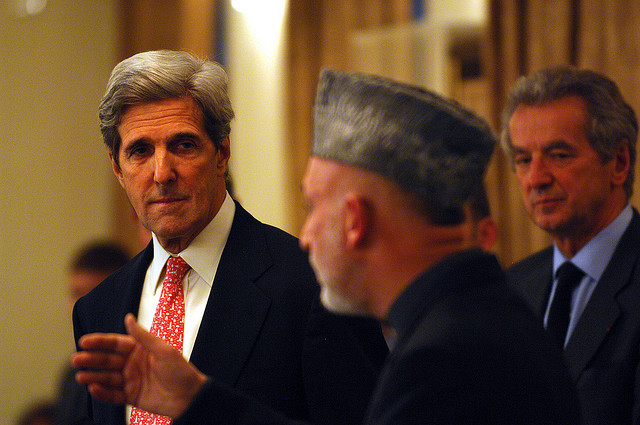 As John Kerry begins his tenure as Secretary of State this week, there is arguably more opportunity to recraft American diplomacy than at any time since the epochal changes of the George H.W. Bush Administration. U.S. military forces have left Iraq and are preparing to leave Afghanistan, Secretary Hillary Clinton’s globe-trotting public diplomacy has set a new tone for the United States abroad, and America has now taken its first steps to focus more on Asia. Historians may well mark these steps as the end of the post-September 11 era. Over the next four years, President Obama and Secretary Kerry can shape the next era.

Secretary Kerry said in his confirmation hearing testimony before the Senate Foreign Relations Committee that it is “a time for fresh thinking.” In foreign policy, innovation requires the rare intersection of pivotal opportunities and pressing challenges. New thinking is sparked by the opportunities inherent in a rapidly changing international system and difficult new dilemmas. But, decisions and national commitments to new thinking are driven by challenges that require hard choices and that sweep away the old answers.

A new Secretary and reelected President are offered such a moment. With a growing economy, a President past his final election, and calls around the world for American leadership, there is certainly new opportunity and energy. And, with the rise of new economic and political powers, persistent security dilemmas, and questions about the sustainability of America’s commitments abroad, there are also great challenges.

With its economic vitality and deep-seated security challenges, there is no region more important for American prosperity and security in the 21st century than Asia. At a potentially transformative time for the region, though, American and Asian leaders need to work together to set transformative goals. Here are five ways Secretary Kerry can start:

Integrate U.S. work on South Asia and East Asia. As pointed out in a recent Asia Society report, the current Assistant Secretaries for East Asia and the Pacific and South and Central Asia have travelled to each other’s regions and begun crucial cooperative work. These are important first steps, and they should be built on.

If a major accomplishment of post-Cold War U.S. diplomacy was to recognize the changing geography of international relations by expanding NATO, today, a similarly unique confluence of events creates the opportunity to expand what Washington often calls “Asia” to include South Asia. The opening of Myanmar creates the conditions for geographically uninterrupted and new political, trade and infrastructure ties from India through all of South, Southeast and Northeast Asia. A new Indian diplomacy recognizes that India’s interests demand more productive relationships with all of its neighbors. The expanding military capabilities of China and India and the inability of the countries to resolve border disputes bilaterally raise the potential for conflict and create a clear interest by all Asia-Pacific nations in embedding these two critical countries in processes of regional dialogue and integration. Finally, the most challenging potential drivers of conflict — water, territory, maritime security, terrorism, proliferation, climate change, migration, human and other illicit trafficking — all cross the East Asia-South Asia “boundary” and are increasingly recognized by governments in the region as requiring a coordinated response.

Double down on Myanmar. President Obama’s landmark trip to Myanmar in November 2012 underscored the U.S. commitment to the reform efforts under way, which Asia Society assisted through Track II dialogue and policy research. But, reform will be a long and difficult process, as underscored by recent reports of persistent internal conflict.

Myanmar’s success is important for its own sake, but also because it will set expectations in other countries on the possibilities of fundamental reform. The United States’ message to North Korea, Iran, Cuba, Syria and others has been that governments can choose the many benefits of full participation in the international community and friendship with the United States if they set aside their nuclear programs, repression or violence. In Myanmar, Secretary Kerry can show to all the many benefits of a decision to change.

During his visit, President Obama launched the two-year, $170 million U.S.-Burma Partnership for Democracy, Peace and Prosperity. This support will help Myanmar make great strides, from strengthening the rule of law to meeting humanitarian needs.

But, with a per capita GDP around $1,400, less than North Korea, and on the same level as Burkina Faso, Haiti and others, there are many needs in Myanmar, and much more the United States could accomplish with more funding and a sustained commitment over the long-term. For example, as South Korea (a country of a similar population to Myanmar’s) transformed its economy, the United States committed $60 billion in grants and loans over 32 years.

With that support and a national commitment to a new way forward, South Korea transformed itself and became one of the United States’ strongest partners in Asia. Myanmar, too, can be a great success story, in which America’s moral example and its development, governance and business know-how lend a crucial helping hand to a transforming nation dedicated to change.

Deepen dialogue on Asian nations’ evolving role in global organizations. The G-20 institutionalizes greater Asian influence in global affairs, particularly on the global economy. But, Asian nations have their sights set higher, on transforming membership in the United Nations Security Council, leadership at the World Bank and other institutions to fully reflect Asia’s rise.

These debates are fraught with difficulty, but putting them off doesn’t make them easier. There will be no truer sign of the U.S. commitment to Asia than to find new formulae for inviting greater Asian leadership of the world’s global institutions. Finding workable ways to broaden participation in the institutions created to advance norms and policies most dearly defended by the United States is not, as some would have it, an abdication, but rather a sign of American leadership.

But, very little of that important work is apparent in the U.S. political discussion on China. In October, the Presidential debates continued the political tradition of hard talk on China, which American experts don’t believe will be implemented, and which Chinese observers regularly disregard.

Conveying complexity is not generally a strength of the U.S. political process. Certainly, the 2012 presidential election wasn’t decided on the merits of U.S. Asia policy, and so there was little percentage for the candidates in deep discussion on the topic.

Surely, China and the United States are antagonists on a number of issues, from human rights to trade practices. At the same time, the United States and China have seen some of their security policies gradually align since the beginning of China’s reform era — on non-proliferation, for example. Trade, while still contested, has offered significant economic benefits to both in good times and shared challenges in bad economic times. For example, according to a 2011 Asia Society report on Foreign Direct Investment in the United States, “[b]usinesses from China have established operations and created jobs in at least 35 of the 50 U.S. states and across dozens of industries in both manufacturing and services. Official data tend to obscure the exciting reality that the United States is open to Chinese investment and that that investment is, in fact, arriving in increasingly larger amounts — more than $5 billion in 2010 alone. The actual number of jobs that Chinese investors have created likely exceeds 10,000—many times the official estimate.”

As I previously wrote in this space, a true rebalancing toward Asia is going to require more domestic political courage in the United States and more public education. It is now easy in a debate on Asia to give half the story — about Chinese and American differences on politics and trade, and the many dangerous security dilemmas and historic antagonisms. It's an important half, but still only half.

Indeed, it is exactly how American leaders navigate the deep complexity of U.S. relationships with Asian nations that will determine America’s success in the region. The United States needs a new, more nuanced discussion of the challenges and opportunities in its relationship with China. Secretary Kerry — a globally recognized leader now insulated from the political pressures of elective office — is well placed to lead this conversation.

Decrease the barriers to foreign travel to the United States. Though this isn’t all the responsibility of the State Department, Americans have raised since 2001 the barriers for foreign travel to and through the United States. This is an economic, as well as a public diplomacy, misstep. It makes some of the United States’ most valuable assets — for example, its world-leading university system — less attractive. America’s top diplomat would do well to use his influence to recast the balance between security and openness.

With signs of persistent gridlock on domestic policy, foreign policy may be President Obama’s greatest hope for second-term accomplishment. There are transformational opportunities to be seized, and they are in Asia.

Join the conversation in the comments section below. What are your five ideas for Secretary Kerry’s Asia policy?