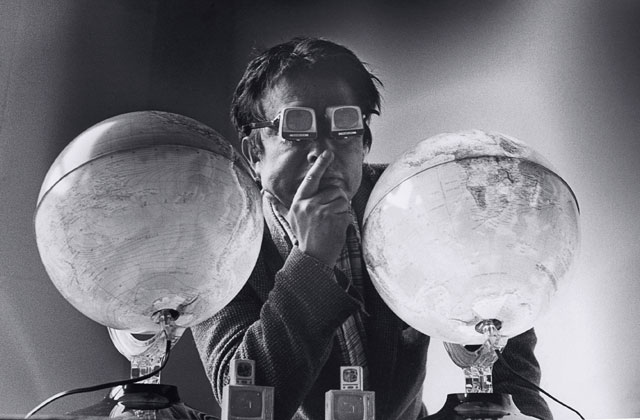 In some cases, the world's most revolutionary thinkers don’t have their imaginations realized until decades or centuries after their passing. Leonardo di Vinci, the Italian Renaissance man who devised intricate plans for the parachute and the helicopter, continues to be revered for his clairvoyant ideas formulated almost half a millennium ago. Nam June Paik — the Korean American artist who was among the first to adopt the television as an artistic medium — has had many of his astute predictions come to life decades after he first vocalized them: it's undeniable that his work and writings have anticipated some of the most compelling inventions of the information age.

Asia Society Museum's exhibition Nam June Paik: Becoming Robot chronicles the many contributions the visionary artist has made to the field of video art. Here are a few of Paik's predictions that have come to life in the past few decades.

1. Internet
Since the Internet was first conceived, people have struggled to verbalize its seemingly magical capabilities. (In a now-legendary statement to his colleagues, U.S. Senator Ted Stevens once erroneously described the Internet as a "series of tubes.") Even without a background in science, Nam June Paik imagined the endless uses for the Internet as early as 1974, when he wrote about his plans for an "electronic superhighway" in a paper for the Rockefeller Foundation. In fact, Paik's term has been linked to the early moniker for the Internet — the "information superhighway." Here's how Paik described his idea of the Internet:

"The building of new electronic super highways will become an even huger enterprise. Assuming we connect New York with Los Angeles by means of an electronic telecommunication network that operates in strong transmission ranges, as well as with continental satellites, wave guides, bundled coaxial cable, and later also via laser beam fiber optics: the expenditure would be about the same as for a Moon landing, except that the benefits in term of by-products would be greater."[1]

2. MOOCs (Massive Open Online Courses)
Traditional institutions of higher education have come under assault in recent years by MOOCs, online courses that hope to democratize the education business by offering rigorous coursework from top professors through the Internet. Websites from Udacity to Khan Academy are offering hundreds of courses to millions of users, such as precocious 12-year-old Khadija Niazi from Pakistan, who completed Udacity's Physics sequence with highest distinction. Paik authored "Expanded Education for the Paperless Society" in 1968, where he predicted the rise of an "instant global university:"

"Suppose a girl in Kentucky wants to study the Japanese Koto instrument, and a graduate at U.C.L.A. wants to experiment with certain Persian or Afghanistan musical instruments," he wrote. "How would they do this?

The malleable television (i.e. videotape) would enable individual lessons for many subjects to be given from anywhere to anywhere."[2]

3. Special Effects
Artists are notorious for dreaming about the future, and in rare cases, they venture out and make these dreams a reality themselves. Today, just about any movie features at least some degree of special effects and video distortion to create the type of otherworldly pleasures that make the visual medium so appealing. Few recognize the instrumental role Nam June Paik played in the invention of video special effects when, with engineer Shuya Abe, he created the Paik-Abe Synthesizer in 1969 — the first machine designed to distort live and preexisting video. Paik wrote fondly of a future of video as an artistic medium with the help of special effects, writing that video distortion:

"will enable us to shape the TV screen canvas
as precisely as Leonardo
as freely as Picasso
as colorfully as Renoir
as profoundly as Mondrian
as violently as Pollock
and as lyrically as Jasper Johns."[3]

4. Cable Television
Scrolling through the channels on cable television can be a beleaguering ordeal these days, with hundreds of channels from which to choose. Modern cable television, however, is a relatively new phenomenon. Global Groove (1973), one of Paik's most renowned works, hints at what the future of television would hold by commencing with the prophetic observation:

"This is a glimpse of a video landscape of tomorrow when you will be able to switch on any TV station on the earth and TV guides will be as fat as the Manhattan telephone book."

5. Google Glass
For most viewers, Nam June Paik's art, which depicts dynamic human interaction with video screens, was surely a foreign sight. In 1971, his famed piece TV Cello featured a nude cellist — his longtime collaborator Charlotte Moorman — adorned with modified sunglasses that operated as a video screen. Wearable technology has become quite trendy in recent years, best evidenced by Google Glass, the glasses that enable users to search the Internet, take photos, and play games via a screen embedded into the lenses of the eyewear. In both form and function, Paik's TV Glasses serve as an effective prototype of Google Glass and similar optical head-mounted displays.

[1] Nam June Paik, "Media Planning for the Postindustrial Society — The Twenty-First Century Is Now Only Twenty-Six Years Away," 1974.