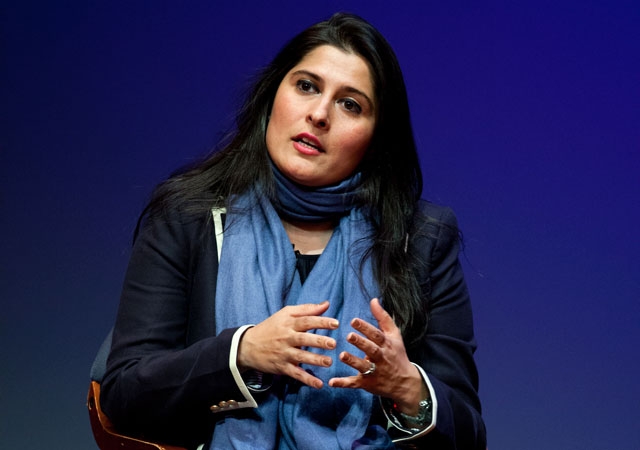 Time magazine has named Pakistani documentary filmmaker Sharmeen Obaid-Chinoy one of the world's 100 most influential people, putting the Asia Society Associate Fellow and 2011 Asia 21 Fellow in company with newsmakers ranging from politicians such as Hillary Clinton to athletes like Leo Messi.

"Sharmeen Obaid-Chinoy's documentary Saving Face brought Pakistan's acid-violence problem to the world stage," writes Time's guest contributor, Angelina Jolie. "Today she is bringing the film's message to towns and villages in Pakistan through an educational-awareness campaign. Her film not only gave her subjects sympathy and understanding but, more important, gave them dignity. The 'victims' in Saving Face are some of the strongest, most impressive women you will ever come across. She showed us their scars, and we saw their true beauty."

At a screening of the Oscar-winning Saving Face at Asia Society New York on March 5, Obaid-Chinoy said: "I felt that I needed to be part of this project because I'm a product of Pakistan, I was born and raised there, and Pakistan can produce women like myself, and produce women like Zakia and Rukhsana (two women in the film). There is a great schizophrenia that goes on in the nation and it's important for the educated women to be the voice of those who are not able to voice what's happening to them."

Iftikhar Ali, Special Correspondent at the United Nations for the Associated Press of Pakistan, said the news around Obaid-Chinoy's winning an Oscar and now being named one of Time's most influential people is heartening for a country that often produces negative headlines in the West.

“She fully deserved this honor," Ali said. "She brought the first Oscar to Pakistan, which put Pakistan in a positive light at a time when it was getting a lot of negative publicity in the Western media. But the hard work she put into producing Saving Face won her worldwide acclaim and that really pleased the nation. The most important thing is that she focused on the problem of acid attacks against women in Pakistan, which has now received international attention. There is now much more awareness of the problem and activity in the government as well as non-governmental sector to stop such attacks.”

Masood Haider, U.N. correspondent for Pakistan’s Dawn, said the Time magazine honor comes at a good moment as it is on the heels of Obaid-Chinoy's Oscar-win.

“Sharmeen Obaid-Chinoy has managed to sensitize the Pakistani nation to the conditions of women who are attacked by these men with acid, which is a very good thing for Pakistan,” Haider said. “I think she deserves this award because she managed to make a mark within the country because the Oscar awards resonate in Pakistan.”

Click on the following links to see Obaid-Chinoy's past involvement with Asia Society.

Video: Post-Screening Q & A with Obaid-Chinoy

Sharmeen Obaid-Chinoy: 5 2011 Pakistani Cultural Events You Might Have Missed