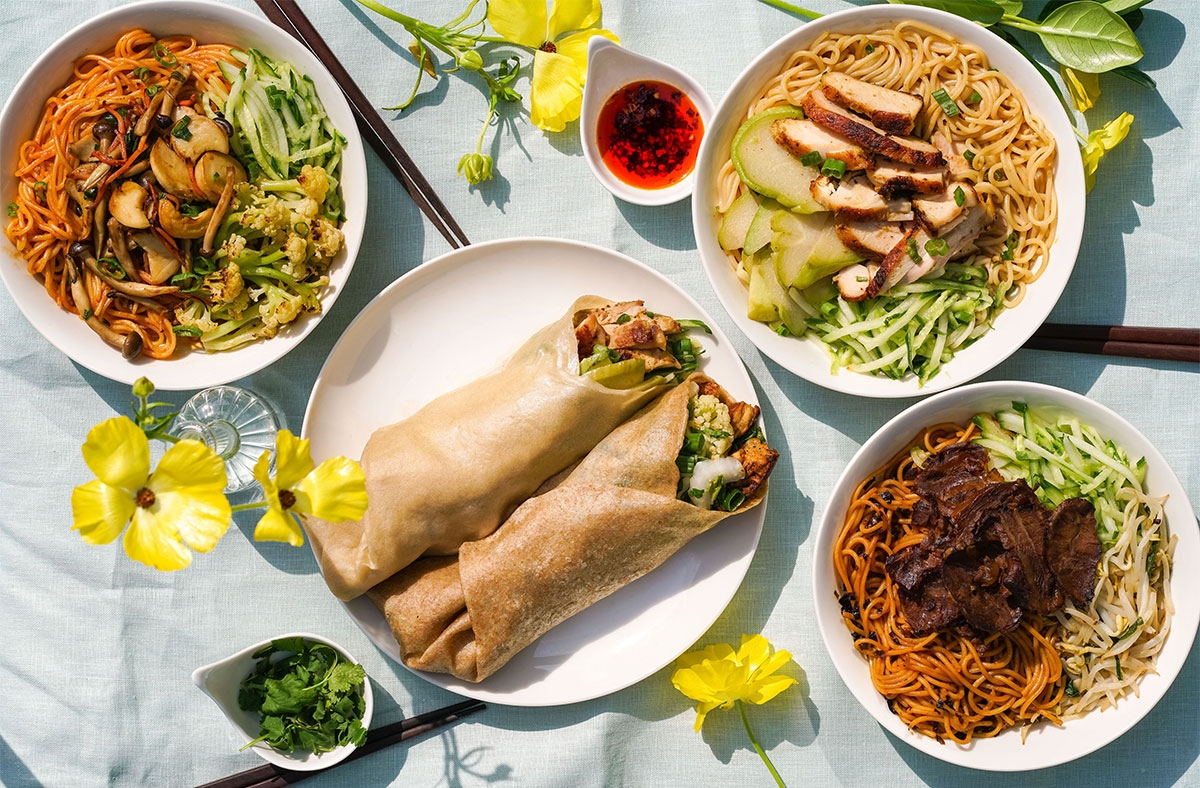 The menu at Junzi Kitchen, a fast-casual Chinese food chain, includes noodles and wrap-like 'bings' that give a modern twist to classic Chinese flavors. (Photo courtesy of Junzi Kitchen)

When Hongkonger Lucas Sin began thinking about opening his first restaurant in the United States, he was certain he wanted to showcase what he knew best: high-quality ingredients and familiar flavors accessible to everyone.

“That’s how we chose to design and refine our menu, to find these seemingly simple combinations that still have a bit of culture and history,” said Sin, who is now chef and culinary director of Junzi Kitchen, a fast-casual chain serving up northern-Chinese inspired noodles and bings (a wheat pancake with flavorful egg, meat, or vegetables).

Sin was born in Canada but raised in one of Asia’s culinary capitals, Hong Kong. He had early ambitions to be a chef, opening his first restaurant at the age of 16, before heading to New Haven, Connecticut, to study cognitive science and English at Yale University. Though Sin wasn’t studying culinary arts in the classroom, he continued to sharpen his cooking skills by running a pop-up restaurant out of his dorm on the weekends. Over two years, he helped conceptualize seven pop-up restaurants.

His particular culinary journey has been aided by a larger immigration movement from China and Hong Kong that laid a foundation for his ambitions in the U.S. While the earliest waves of Chinese immigrants in the U.S. opened restaurants primarily as a means to get by, the young restaurateurs behind many of the newest Chinese restaurants are more concerned with self-expression and sharing culture. China’s prosperity has ushered in a new type of emigre: upwardly mobile, highly educated, and often business-savvy.

The first wave of Chinese immigrants arrived in America starting in the mid-nineteenth century to work as laborers on the Transcontinental Railroad or miners during the California Gold Rush. Coming largely by way of southern Chinese provinces like Guangdong (then Canton) or Fujian, these large groups of Chinese immigrants lived together in proto-Chinatowns where they could cook familiar foods and speak their native tongues. The specific circumstances of their immigration informed the cuisine they made: hearty food to meet the needs of a laborer, cooked with cheap and accessible ingredients, wok fried in the style preferred at home.

In the intervening century, Chinese cuisine in the U.S. continued to evolve as immigration expanded, particularly after the abolition of a quota-based system in 1965. Today, the offerings are not only regionally diverse but range from super affordable to luxurious. As restaurateurs have expanded and the advent of “foodie” culture has gone mainstream, delicacies previously only known to Chinese audiences are increasingly becoming part of the wider public palette.

Though the foundation beneath the newest generation of Chinese restaurants might be different, they — like their predecessors — are having a profound influence on food, and Chinese cuisine in America is changing because of it. Junzi Kitchen is the latest iteration of fast-casual restaurants that draw on the success of places like Chipotle and Sweetgreen, this time offering up regional Chinese specialties to a broader audience.

At Junzi Kitchen, while the flavors of the food are familiar and don’t stray too far from Chinese restaurant traditions, their approach to design and aesthetic and presentation is more of a departure. At most locations, the noodles and bings are customizable. And the restaurants themselves are spacious, bright, and modern are furnished with natural wood and furniture details that evoke nordic design trends and play well with a generation that values “Instagrammable” spaces. 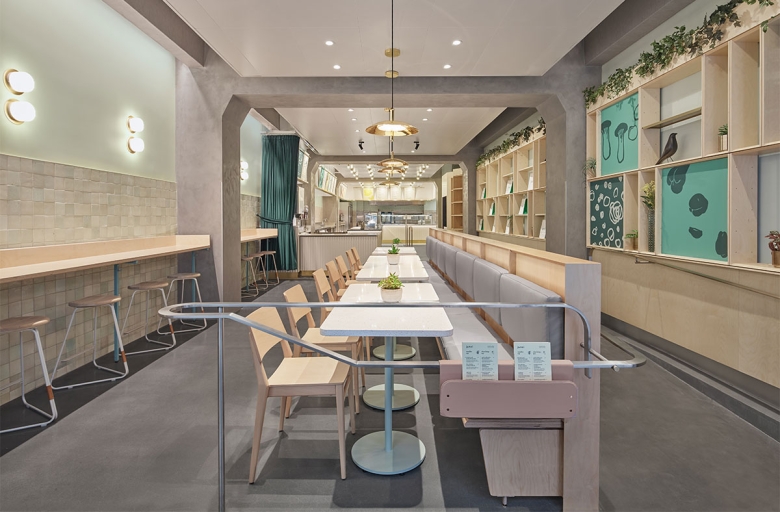 Junzi Kitchen recently opened their flagship location in Bryant Park, a commercial district of Manhattan in early May. (Photo courtesy of Junzi Kitchen)

The people behind Junzi Kitchen fall into this category. Sin met Junzi’s co-founders Ming Bai, Yong Zhao, and Wanting Zhang at Yale where the foursome were pursuing degrees in areas unrelated to the food industry. Ming, a classically trained Chinese ink and brush painter was studying for an MFA (her design work has been on view at the Museum of Modern Art Library as well as the Metropolitan Museum of Art). She now serves as the art director for Junzi Kitchen. Yong and Wanting both enrolled at Yale’s School of Forestry and Environmental Studies after getting their undergrad degrees elsewhere — and it was Yong’s mom who gave the foundational recipe for Junzi’s chun-bings, or spring pancakes.

All were passionate about food and found themselves dreaming up what would eventually be the first Junzi Kitchen: a modern, regionally specific, fast-casual, scalable chain — a relatively new concept in the Chinese cuisine space. Their first location, just down the street from Yale, was intentional.

Historically, the first stop for those immigrating to work in the U.S. was through a Chinatown community in whatever city they were in. Many stayed; living among people who spoke the same language, could provide connections, and worked similar jobs. But a new crop of Chinese immigrants means a new definition of what feels like a familiar sense of community.

“For our generation, our first stop when we arrived was school. Most of us came here already equipped with the language ability to survive and thrive outside of Chinatown — so many of us never thought about settling [in that area]. We live, learned, and work outside of Chinatown,” co-founder Yong said.

A similar sentiment propelled Amelie Kang, co-owner of New York’s East Village Sichuan dry-pot spot MaLa Project, which opened in 2015. She, along with her business partner Meng Ai, first arrived in New York for school in 2010. Together they opened up two MaLa Project locations, one in the East Village and the other in Bryant Park, as well as a fast-casual spot called Tomorrow that offers a changing menu of simple and authentic meals that resemble what she ate growing up in Beijing and Tangshan, like fish fillet with ginger and scallion, to the Financial District lunch crowd.

“We wanted to open up in the East Village because both of us were very familiar with the area — I was living there and [co-founder] Meng Ai was going to school in the area — so we understood the dynamic of the neighborhood,” Kang said. “There are plenty of students and a pretty significant Asian community, but it differs from those who have been in New York for decades."

But Sin and Yong stress that being outside of Chinatown doesn’t mean they are trying to sell you an elitist or “inauthentic” version of Chinese food. In fact, they hope bringing the food they know and love outside of Chinatown, packaged in a way that matches the lifestyle of a new yuppie audience, makes it even more accessible to the millions who crave Chinese food as an everyday experience.

“We wanted to create everyday food for lifestyles that were similar to ours, bringing food we love to people live and work outside of just Chinese communities. We’re looking to serve culturally open, young, professional demographics first. We’re emphasizing everyday food, and most people don’t go to Chinatown every day for food. We need to be in their neighborhoods, near their places of work,” Yong explained.

This is part of Junzi Kitchen’s goal to become a place that has wide accessibility with a distinct Chinese personality. Sin says Ikea is a good example of this: “They have strong cultural symbols and a very strong allegiance to the country that they come from but that doesn’t mean you have to feel like a Swede every time you are in Ikea.

“We don’t need to strongarm our way into culture; we’re already part of it.”