This Fall Season, the United Nations is in Fashion | Asia Society Skip to main content

This Fall Season, the United Nations is in Fashion 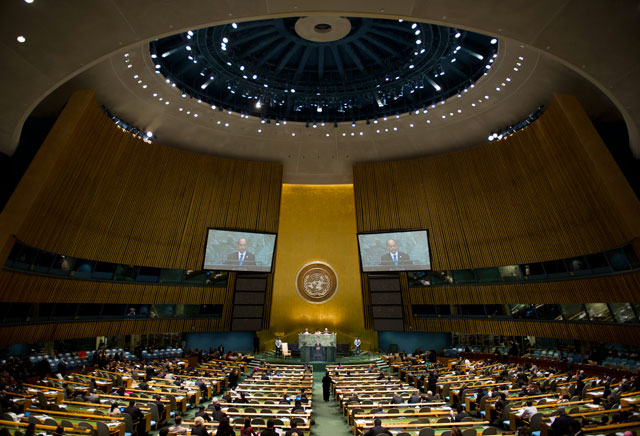 Thein Sein, President of the Republic of the Union of Myanmar, addresses the 67th United Nations General Assembly meeting Sept. 27, 2012 at the United Nations in New York City. (Don Emmert/AFP/GettyImages)

It's an annual ritual, a rite of early fall in New York: The leadership of the world (yes, the world) descends on this city, more than 200 heads of government and their entourages in town for the 68th gathering of the United Nations General Assembly, here to collectively tackle the most pressing problems on the planet.

It’s a stirring thing, in principle at least. A small sliver of land near the United Nations teeming with prime ministers and foreign ministers, the air humming with talk of Millenium Development Goals and conflict resolution, the in-boxes of diplomats and journalists jammed with invitations. And that's before we even mention the Clinton Global Initiative, which sets up shop during the same time, a parallel world-saving universe just a mile away.

Unfortunately, over the years "UNGA," as it's known, has often been remembered more for the bombast and traffic snarls it produces, rather than the noble work that’s done in and around the assembly hall. Media attention has typically gone to the greatest hyperventilators — Moammar Qaddafi and Mahmoud Ahmadinejad, say — rather than to the softer, nobler voices. The speeches were often objectionable, and didn't always make sense, but they got the press.

Things are looking different this year, for two reasons. First — the paragons of bombast are absent, for the most part. Qaddafi is no longer with us, and Ahmadinejad is no longer in charge (more on his successor in a moment). Ahmadinejad’s departure from power has removed some of the most bizarre and eagerly-anticipated press events of UNGAs past — namely his breakfasts with leading journalists and his own General Assembly speeches, all with their How-low-will-he-go? quality. In Latin America, Hugo Chavez is gone, and Fidel Castro is alive but not well, and in any case it’s his brother who rules Cuba now.

The other, more important reason why UNGA 2013 is already a different case is that the U.N. itself sits — for the first time in a while — at the center of at least two of the critical global issues of the moment. The August use of chemical weapons in Syria has thrust U.N. inspectors and the Security Council into the midst of the Syrian war, even as Secretary-General Ban Ki-Moon bemoans the lack, to date, of U.N. resolve. While it was the U.S. and Russia that patched together the potential deal for Bashir Al-Assad to avoid intervention, there is no shortage of other countries in the conversation — from Syria’s neighbors to the Gulf nations, from the European Union to China, from Indonesia — heralded as a model of Muslim-majority democracy — to Egypt, Libya and Tunisia, all nursing variations on the Arab Spring hangover. A perfect moment, you might say, for a global gathering.

Then there’s Iran, and the new man in charge. With Ahmadinejad the UNGA conversation was often about whether any New York hotel would give him a room, or how large the protests might be; now, with newly-minted president Hassan Rouhani in town, it's, Will Obama shake his hand? There may never have been a moment as ripe with expectation for the U.S. and Iran since the revolution, three and a half decades ago. Handshake or no, there is enormous hope invested in the new president, or at least there is great interest in hearing Rouhani’s speech, and in testing whether the vastly more moderate language will translate into moderate action, and — we can dare to hope — something like real breakthroughs, on the nuclear question, the U.S.-Iran relationship, or even Syria, where Iran is a major player. We know this because of overwhelming demand for a place at an event we are hosting for President Rouhani Thursday. Certainly Rouhani's victory has added the spice of high expectation and excitement to the annual proceedings.

So the U.N. is “hot” again, as a journalist I know said the other day. And there was this tweet, from a U.N. official: “1,000 journos accredited!” he wrote, using the shorthand for “journalists.” This year, you can certainly see why.