Expert: Why a Group of BRICS Has Pledged Cash to a Wealthier West | Asia Society Skip to main content

Expert: Why a Group of BRICS Has Pledged Cash to a Wealthier West 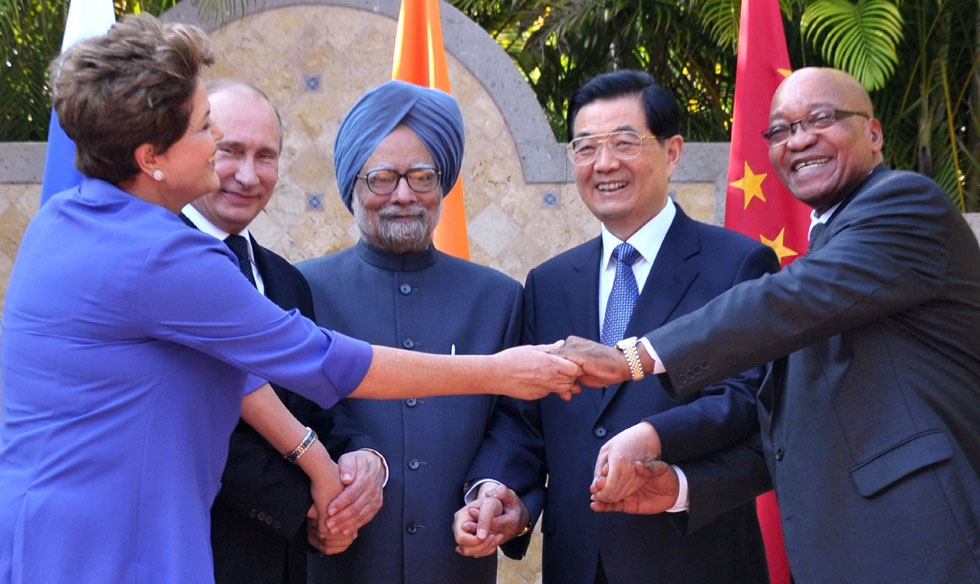 Almost against their will, the emerging economies have been forced to take a larger role in the management of the world economy thanks to the continuing financial crisis afflicting the West. This was more than evident at the G20 summit at Los Cabos, Mexico, this week.

While there is much talk about emerging economies dislodging the Western powers, the truth is most of them are quite happy to let the developed world continue to set the rules and pay the costs of running an international system. Countries like India and Brazil at best wish to modify the system. China arguably has greater ambitions but even it desires a soft transfer of authority.

The most popular representation of the emerging economies, the BRICS group of countries, have never completely taken themselves seriously. The Indian prime minister, Manmohan Singh, once derided the idea of an international bloc built around a “Goldman Sachs report.”

But at Los Cabos, faced with a seemingly endless Eurozone financial crisis, the BRICS were under pressure to come up with more than rhetoric. The BRICS countries pledged $75 billion among themselves to the International Monetary Fund’s firewall against a Eurozone collapse. Of this, $43 billion came from China alone. But this comes on previous unilateral pledges by many of these countries. India, for example, has now pledged $24 billion to the IMF since the Lehman Brothers crisis broke out.

The BRICS formulation provided something else: political cover. India and China in particular faced domestic rumblings at the idea of bailing out countries that were, in per capita terms, much wealthier than themselves. And the IMF continued to have a negative “neo-colonialist” image in many developing countries. The BRICS provided a neutral, non-Western body to funnel the money to the West.

Many other emerging economies joined in the fray as well. Mexico, the summit hosts, pledged $10 billion and developing countries as diverse as Colombia and the Philippines also came forward. The IMF’s firewall has now ballooned to $456 billion.

The emerging economies made other concessions as well. They acknowledged that the IMF was now almost solely committed to helping out Europe and would not be available to assist them any more. Singh, for example, argued that more funds should therefore be committed to the multilateral regional development banks like the Asian Development Bank. Countries like India and China still had large pools of poverty and no shortage of development requirements.

It was hardly a one-way street. The BRICS demanded that earlier promises of shifting IMF voting shares from the developed world, largely from Europe, to them should be fulfilled, though the money they are pledging does not contribute to that voting share — that is a separate fund contribution to the IMF.

This didn’t stop media debates in India at least asking whether the country could afford to be pledging so many billions to the IMF and, more pointedly, whether it made sense to be offering to help out people with per capita incomes 20 to 30 times greater than the average Indian.