Excerpt: 'The Revolutionary Barons of the Sea' | Asia Society Skip to main content

Excerpt: 'The Revolutionary Barons of the Sea' 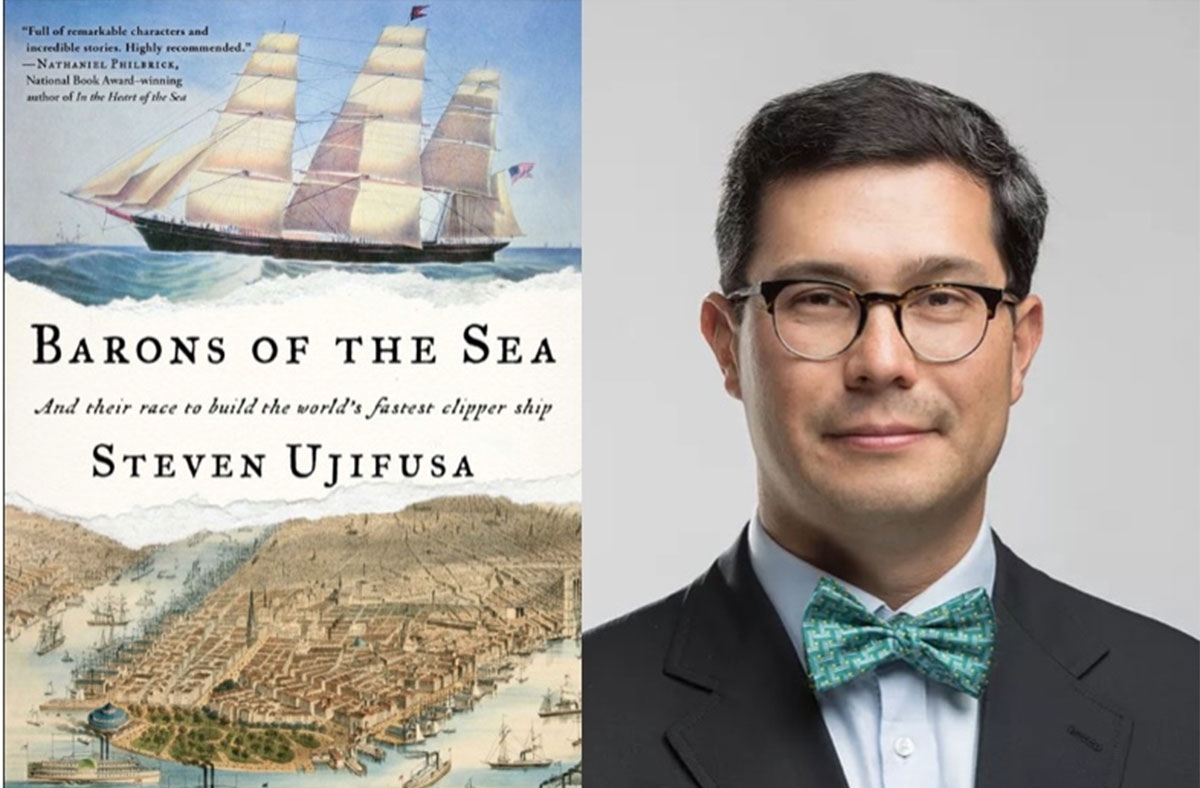 An excerpt from 'Barons of the Sea' by author Steven Ujifusa.

The American clipper ship, a technological marvel, is what established the trading relationship between China and the U.S. in the mid-19th century. In Barons of the Sea: And Their Race to Build the World's Fastest Clipper Ship, maritime historian Steven Ujifusa chronicles the ship’s invention and how it propelled a golden age of trade and commerce, forever changing the economies and societies of both countries. Among the risk-taking daredevils and shrewd businessmen who owned clipper ships were Warren Delano II, the grandfather of Franklin Delano Roosevelt, and Abiel Abbot Low, whose family endowed Columbia’s Low Library.

Read an excerpt from Barons of the Sea: And Their Race to Build the World's Fastest Clipper Ship below.

On April 24, Steven Ujifusa will discuss his book at Asia Society New York. The program will be available worldwide via live webcast at 6:30 p.m. New York time.Learn more

"He cared little for outsiders, but would do anything for his own family."

Warren Delano II loved sitting at his big desk at Algonac, his Hudson River estate. Around him were treasures of Chinese art: temple bells, porcelains, silk wall hangings. This day, through the wavy glass panes of the library windows, he could see a fall breeze rustle the red and gold leaves on the trees, and the sun glitter on the river. The air was crisp, and a coal fire glowed in the hearth. Penning letters to family and friends, with advice on business and stern judgments about character, he was at home, in charge, and seemingly at ease, managing a business empire that spanned the globe.

Fifty years old in the fall of 1859, Delano was a tough man to the core: well over six feet tall, with chiseled features, a hooked nose, a leonine beard, and bristling sideburns. Suspicious of strangers, he loved his family without reservation. All coldness melted away when his six children tumbled around the library, as they often did while he worked. If two of them got into a fight over a toy, he would look up from his desk, smile, utter firmly, “What’s that? Tut, tut!” and the squabble would stop. It was not fear of the patriarch but fear of disappointing him that kept his children well behaved. He never spanked them. Nor did he share his worries on days when letters brought ill news. In the words of one daughter, he had a remarkable knack for hiding “all traces of sadness or trouble or news of anything alarming.” To be a true Delano, one had to keep a pleasant disposition, no matter what life threw at you.

The Delano clan had been risking their lives on the high seas ever since the Flemish Protestant adventurer Philippe Delannoy first made the Atlantic crossing to the Plymouth Bay Colony in 1621. Building the family’s maritime fortunes required spending much of life apart from those they loved, and demanded a delicate balance of poise on land and toughness at sea. It was a fact of life in seagoing New England: the longer the absence and the larger the risks, the greater the financial rewards. The old whale-hunting cry “A dead whale or a stove boat!” could well have been the family’s motto.

For two centuries, the clan had sacrificed much to attain modest prosperity. But Warren Delano’s opulent fortune had sprung from his mastery of another kind of maritime gamble: trading in tea and opium. He had made two visits to China as a young man, first as a bachelor, and then with his wife, Catherine, whom he had married only a few weeks before they set sail. They had lost their first-born child in that country, a tragedy that had driven his young bride to near-suicidal despair. Another child would come home chronically ill.

Yet Warren was expert at keeping his private emotional life divorced from the grand vision by which he and his contemporaries had transformed the world. Their hard work had made a young republic into one of the world’s great commercial sea powers, with a fleet of fast ships that challenged Great Britain’s maritime supremacy. The success of Yankee clippers, which Delano helped mastermind, shook Old Britannia’s complacency, cracking ancient, restrictive trade laws that had kept foreign-built vessels out of British ports. “We must run a race with our gigantic and unshackled rival,” snarled the London Times upon the first visit to London of a Yankee clipper, in 1850. “We must set our long-practiced skill, our steady industry, and our dogged determination against his youth, industry, and ardor." The American clipper in question, Oriental, had cut the trip from China to London nearly in half, from six months to a mere 97 days, and her cargo of tea sold for a whopping $48,000. This was at a time when an average American worker made between $10 and $12 a month. Delano’s great wealth from trade had allowed him to remove his family to Algonac, a 60-acre estate north of New York City.

The mammoth scale of the house was in no small part inspired by a great rambling palace Delano had seen on the banks of China’s Pearl River many years before, while it also reflected the latest in 19th-century American architectural fashion. The architect, Andrew Jackson Downing, was a proponent of the “picturesque”: a whimsical Gothic window here, a wood-and-glass cupola there. Downing seems to have understood his seagoing but home-loving client. As a self-taught tastemaker, Downing skillfully used his pen to appeal to the longings of his prosperous but increasingly harried bourgeois clientele. “The mere sentiment of home,” Downing mused in The Architecture of Country Houses, “has, like a strong anchor, saved many a man from shipwreck in the storms of life.”For Delano, Algonac did exactly that. The tan stucco house, designed in the Tuscan villa style and adorned with towers, gables, and wide porches, was his fortress — a refuge from all of the uncertainties that had dogged his early life. Screened in by stone walls and tall trees, Warren was the realm’s benevolent yet exacting ruler. Here, all of the world’s problems were kept at bay, and all of life’s questions answered. He played games with his children and tended his fruit trees. He and Catherine wrote what they called their “Algonac Diaries,” lovingly describing their children’s “explosions of fire-crackers,” and one particularly “splendid bonfire in the henyard.”

The crash of a gong summoned the family to their evening meal, in an east-facing dining room with a spectacular view of the Hudson River. Yet Warren didn’t tell stories to his children about his time in China as a young man  — the violence he had lived through, or his loneliness there before Catherine, or facing down the hard edges of life on the other side of the world. He was determined that his children not go through what he’d experienced. For all his present comfort, he knew what it had taken to make his money, in a foreign country, skirting the fringes of the law.

At Algonac, there was a silent witness to the source of his wealth, in spirit if not in life: a Chinese patriarch was enshrined in an oil painting that hung in the paneled library. He had a thin, pinched face and melancholy eyes, and he was dressed splendidly in flowing silk robes, necklaces of bright jade. A close-fitting cap, topped with the red coral button that denoted his high “mandarin” social status in the Chinese governmental hierarchy, sat next to him on the table.

This was Houqua, the great Chinese merchant whose favor had helped make Warren Delano one of America’s richest men. By 1859, the man in the painting had been dead for more than ten years. But through the first half of the nineteenth century, he had been one of the wealthiest men in the world, and a financial father to Delano and other young American merchants of that time. The painting at Algonac was a gift from Houqua himself. Every partner at Delano’s firm, Russell & Company — the largest and most profitable American enterprise in China — brought home a portrait of Houqua. His visage adorned counting rooms in New York, Boston, and Philadelphia. So revered was the great merchant that one of Delano’s partners named his tea-carrying ship, arguably the first of the sleek Yankee clippers, in Houqua’s honor.

In the years since his time under Houqua’s patronage, Warren Delano had invested the fortune he had made from his Chinese business into more clipper ships, and then into copper and coal mines, Manhattan real estate, and railroads. Delano himself had achieved tremendous stature, not only for his wealth but also for his character. One contemporary wrote, “He was a man of quick perceptions, accurate judgment, indomitable will, and possessed in a remarkable degree the rich endowment of common sense ... the result of clear thinking and strict adherence to the facts.”

Yet by that fall day in 1859, the business letters Delano was writing from the library at Algonac were getting increasingly frantic. A financial panic two years earlier, triggered by speculation in railroads, had caused his investments to suffer. His clipper ships were particularly hard hit. Within several months of the crash, he had gone from being a millionaire to being close to penniless. Despite Delano’s obsession with privacy at Algonac, there was no way to keep this financial cataclysm away from his family hearth. Meanwhile, America was hurtling toward the reckoning between North and South, a conflict from which even the gates of Algonac could not shelter the Delanos. Warren Delano had a big family, an expensive house, and above all, a reputation to maintain. He had taken big risks throughout his life, and now, staring at bankruptcy, he was not about to sit still. He saw only one way to avoid certain ruin: He would return to China and the opium and tea trade.