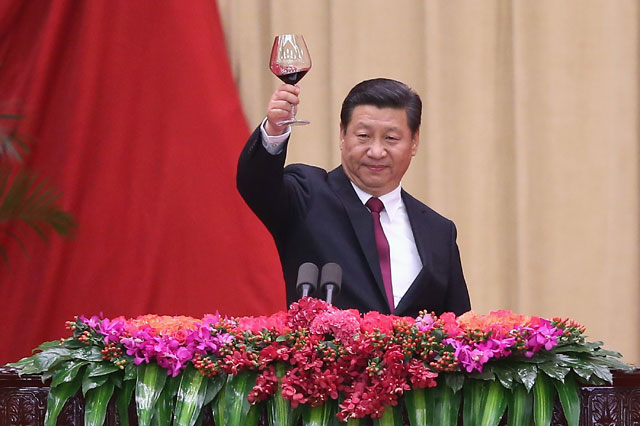 Chinese President Xi Jinping gives a toast during the National Day reception marking the 65th anniversary of the founding of the PRC in Beijing on Sept. 30, 2014. (Feng Li/Getty Images)

In a New Yorker profile this week , journalist Evan Osnos documents how Chinese President Xi Jinping emerged from a revolutionary pedigree to become “the most authoritarian leader since Mao.”

The piece describes a man once seen as an “unremarkable provincial administrator” who has now emerged as an uncommonly bold and confident leader. The profile quotes Asia Society Policy Institute President Kevin Rudd, a Mandarin speaker who has met with Xi on many occasions, to contrast him to the composite “colorless apparatchiks” in China’s leadership. “What he says is what he thinks,” Rudd said. “My experience of him is that there’s not a lot of artifice.”

Osnos goes on to detail Xi’s approach to governance since taking power. An excerpt:

In Xi’s early months, supporters in the West speculated that he wanted to silence hard-line critics, and would open up later, perhaps in his second term, which begins in 2017. That view has largely disappeared. Henry Paulson, the former Treasury Secretary, whose upcoming book, Dealing with China, describes a decade of contact with Xi, told me, "He has been very forthright and candid—privately and publicly—about the fact that the Chinese are rejecting Western values and multiparty democracy." He added, "To Westerners, it seems very incongruous to be, on the one hand, so committed to fostering more competition and market-driven flexibility in the economy and, on the other hand, to be seeking more control in the political sphere, the media, and the Internet. But that’s the key: he sees a strong Party as essential to stability, and the only institution that’s strong enough to help him accomplish his other goals."

Osnos, who won the National Book Award last fall for Age of Ambition: Chasing Fortune, Truth, and Faith in the New China (2014) has been a regular speaker at Asia Society New York since he received Asia Society's Osborn Elliott Prize for Excellence in Journalism on Asia in 2007. His next appearance is on April 13, when he joins Henry Paulson onstage for a discussion of Paulson's new book (see "Related," above).