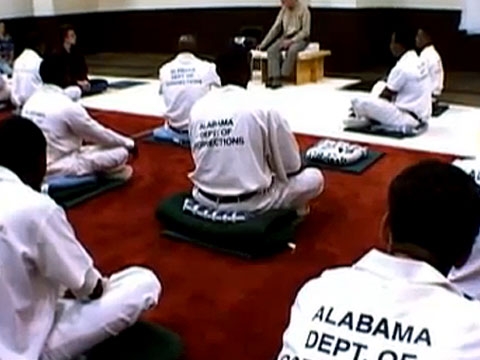 The William E. Donaldson Correctional Facility outside of Birmingham is one of Alabama's most violent prisons. A third of the inmates at the high-security institution are serving life sentences without parole. Some are convicted murderers. Violence abounds within the prison walls as well—the prison was named for an officer who lost his life there in 1990.

In this facility, steeped in the Christian culture of the American South's Bible Belt, the idea of a Buddhist-inspired practice taking hold seems almost unimaginable. And yet this is precisely what has happened.

The Alabama prison has the distinction of being the only one in the U.S. to establish a rigorous 10-day Vipassana style meditation course for its most violent inmates. The practice is known as "insight meditation" and emerges from the Buddhist tradition. This style of meditation is a disciplined practice to gain insight to the causes of suffering and anger, as opposed to simply calming and relaxing the mind.

Donaldson prisoners who have completed the advanced course sing its praises.

In an interview with NPR, inmate Grady Bankhead, who was close to being executed for murder but won a new trial at the last minute and currently has a life sentence without parole before him stated: "Before I went to a Vipassana meditation...I was probably the angriest man in this prison."

Since completing the program, which demands meditating for up to 10 hours a day in complete silence, Bankhead believes he has broached areas of his life hitherto unknown to him. The meditation course offered him balance that allowed him, for the first time, to take responsibility for his actions.

Dr. Ron Cavanaugh oversees patient treatment at the facility and spoke to NPR about the effectiveness of the program, stating a 20 percent decrease in aggression and violence among those who completed the challenging 10 day session during which they ate vegetarian food, consumed no alcohol, and sat in total silence even when not meditating.

However introducing the Vipassana practice at Donaldson has had its critics. After prison chaplains complained that the practice undermined Christian values, the program was shut down by the state. The program returned thanks to the prison's warden, Gary Hetzel after he saw the marked difference the course had on its inmates.

"I could see a significant decrease in behavioral problems, acting out," he told NPR's Debbie Elliott. Hetzel believes the practice is secular, which has allowed for its reintroduction to the prison.

Although chaplains remain skeptical of what is in their minds a most unorthodox treatment, for the time being, prisoners continue to train themselves to "see themselves as they really are" according to inmate Johnny Mack Young, who completed the program.

In addition to the NPR report on the prison, filmmaker Jenny Phillips has made a documentary about the Donaldson prisoners who underwent the meditation program called Dhamma Brothers. Watch a trailer for that film below:

Discuss: What are your thoughts on alternative treatment and rehabilitation programs in the prison systems? Should meditation be promoted more widely in prison reform?