Does Modi's Election Signal an End to 'Inclusive India'? 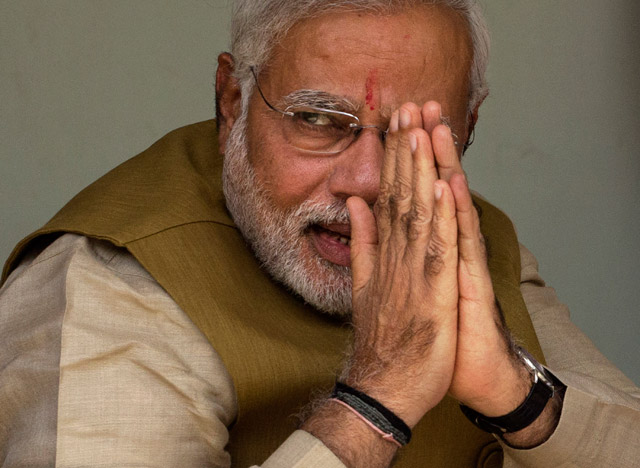 BJP leader Narendra Modi gestures to supporters as he sits with his mother Heeraben Modi, not seen, on her front porch after seeking her blessing on May 16, 2014 in Ahmedabad, India. (Kevin Frayer/Getty Images)

The world’s largest democracy has spoken. There is fervor in the streets of India not dissimilar to the visible excitement around the world when Barack Obama first won the U.S. presidential election. There is a sense of triumph, a palpable sense of people’s power, a resolute belief that Indian democracy has endured — once again. The people had clamored for change, and had sought to hold accountable the governments that had failed them over and over again.

Four decades after Prime Minister Indira Gandhi promised Indians, “roti, kapdaa and makaan,” (food, clothing and shelter), India remains host to the one of the world’s largest populations living under a dollar a day. Nearly 12 million of its 195 million school-age children are out of school, most of them working to eke out a living for themselves and their families, many in conditions of extreme squalor and bonded labor. One-hundred-seventy-eight mothers out of every 100,000 die in child-birth or complications thereof, far above the desired millennium development goal of 103 deaths per 100,000 live births. More than one in three Indian women cannot read or write. Unemployment hovers around 3.5 percent.

Though many of these indicators have in fact improved over the last decade, the people have decisively cast their votes against the incumbent. Still the second fastest growing economy in the world (after China), India’s growth rate dropped from 9.3 percent in 2010-11 to 5 percent in 2012-13, and inflation remains crushingly high at 7 percent. Against this backdrop, the ruling Congress parties and its allies continued to rob the exchequer by the billions. The tenure of the last government was mired in corruption scams of jaw-dropping proportions, made possible by the impunity enjoyed by the Indian political elite across all parties. It is this arrogance and impunity that people have chosen to vote against.

But will their hopes be realized?

The brazen impunity enjoyed by the Congress party after the anti-Sikh riots in the aftermath of Indira Gandhi’s assassination, where over 8,000 Sikhs were killed (3,000 in the nation’s capital alone), seemed to lay the ground for subsequent regional governments to wash away the blood on their hands. Fermenting communal tensions in a population hungry for change and looking for someone to blame has been shown to be a decisive winning strategy in Indian politics. The rise of the highly sectarian party Shiv Sena in Mumbai (that picks a new group to target every few years), and Narendra Modi’s decisive wins in the Gujarat elections for three continuous terms reaffirm the advantage of communal politics in religious India.

However, unlike his predecessors in the BJP, Mr. Modi’s rise to national fame (and now glory) is based on his promise of unlocking India’s fettered potential, and not the construction of a supremacist Hindu state. To take his word at face value would be devastating for India, and extra-ordinarily naïve of Indians. The BJP is but one facet of the multi-headed hydra that is the Rashtriya Swayamsevak Sangh, a volunteer, para-military, nationalist group fashioned along the right-wing European fascist parties of Word War II. Banned by the British, and thrice barred in post-independent India (first after the assassination of Mahatma Gandhi) the RSS had endured and risen. That their vision of the Hindu nation state is narrow, divisive and exclusionary was never a matter of debate, but their new grasp on political power in India is hitherto unprecedented.

The past decade has seen “ordinary” Indians take to the streets repeatedly — whether to protest corruption, or the gang-rapes in urban India, or to vote for the “Aam Aadmi Party,” in Delhi’s recent provincial elections. This extreme disenchantment with the status quo has propelled the country to choose a candidate and party that threatens the very idea of an inclusive India. One can only hope that the fervor with which the people have spoken remains unabated, and that it continues to hold accountable the 543 elected parliamentarians that will determine the fate of one sixth of humanity. Mr. Modi’s campaign was financed by the rich and powerful Indians around the world, and they too will expect their share of the spoils.

Will the 16th Lok Sabha stay true to the mandate the people have given it — one where all children go to school, where mothers do not die in labor, where the youth are employed? Where the country is not once again sold piece by piece to the highest bidder? Where every Indian, irrespective of caste, creed and religion feels at home?

Were Indians to now lapse back into a slumber of smug conceit, they will wake up to find a country they will not recognize.