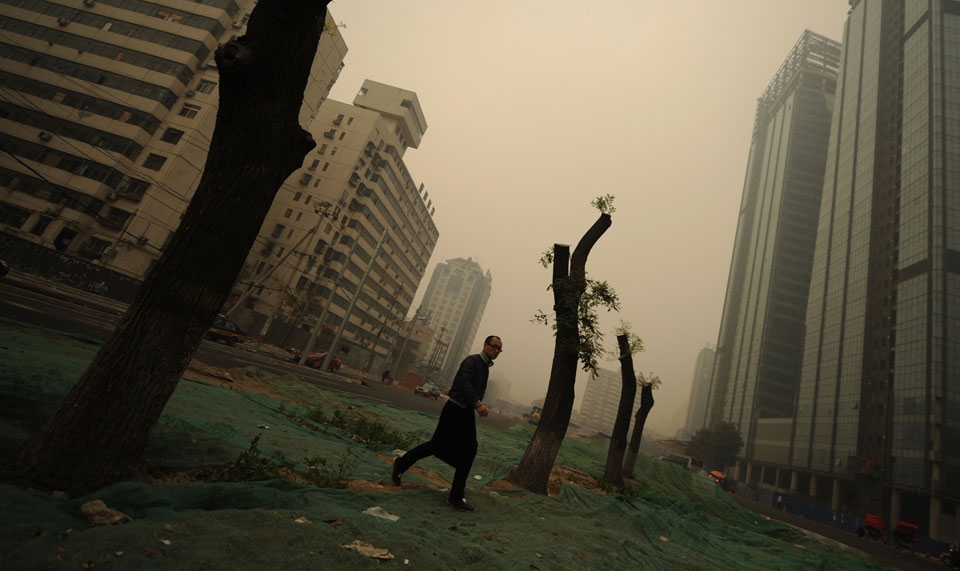 This article was co-authored by Susan Shirk, chair of the 21st Century China Program and Ho Miu Lam Professor of China and Pacific Relations at the School of International Relations and Pacific Studies at University of California, San Diego, and Steven Oliver, a Ph.D. student in the Political Science Department at University of California, San Diego.

Going public with an anti-foreign attack about local air pollution is just asking for ridicule from the increasingly skeptical Chinese public. Netizens responded accordingly. “Why does reading the domestic news feel like reading a bunch of jokes?” asked one commentator. “Do you think people are blind? How many blue-sky days has Beijing had lately? Do you think ordinary people will only believe your own statements?” grumbled another.

This self-defeating action is symptomatic of a panicky leadership with a severe credibility problem. China’s leaders are floundering in their efforts to prevent any more unscripted events like the Bo Xilai or Chen Guangcheng affairs from interfering with the leadership succession scheduled for the fall of 2012.

Chief among their concerns is social unrest that could turn against them and threaten the survival of Communist Party rule. When issues of public concern like tainted food and medicine or environmental pollution agitate the increasingly vocal urban middle class to complain or petition over the internet, China’s leaders usually try to solve the underlying problem promptly and show the public that they are looking out for its welfare. They seem to have learned a lesson from the SARS epidemic in 2003 that suppressing information about a public health threat instead of addressing it head-on will only backfire.

Another strategy for maintaining popular support is to play to nationalism to show that, under the leadership of the Communist Party, China has become a strong nation that takes no guff, even from powerful countries like the United States. These two strategies — responding to public outcry by trying to fix problems and stoking nationalism — have strengthened what political scientist Andrew Nathan calls China's "authoritarian resilience," and staved off popular revolution.

But to come out swinging against the United States for tweeting (here and here) air pollution readings deviates from this pattern. It's one thing to posture against what Party officials often call "hostile foreign forces,” when the matter under discussion is remote from the everyday concerns of Chinese citizens. But when the issue is the thick haze that hangs over China’s growing cities, harming the health of their residents, condemning U.S. diplomats for providing air pollution information is only going to further alienate the public.

Another thing that makes the criticism of the U.S. Embassy so odd is that the U.S. Embassy has been reporting such information in Beijing since 2008. It started monitoring and posting air quality to advise its staff and other American expats about when it was unsafe to jog, bike, and engage in other out-door activities. Diplomatic cables released by Wikileaks reveal that Chinese officials privately lodged protests with the U.S. Embassy over the practice as early as 2009.

Then in early January 2012, when disparities between the information reported by the U.S. Embassy and by the Beijing municipal government during a number of weeks of particularly bad air quality aroused public outcry, the government responded agilely. After Premier Wen Jiabao said that air quality reporting should reflect public perceptions, authorities adopted more stringent air quality standards and began monitoring harmful particulates like PM 2.5 (particulate matter measuring less than or equal to 2.5 micrometers in diameter).

But realizing concrete improvements in urban air quality will take time. Announcing new standards was only a temporary solution to the leadership’s public opinion problem. At present two-thirds of Chinese cities cannot meet China’s own PM 2.5 standard. China’s Ministry of Environmental Protection has installed monitoring stations in 113 key cities that send data automatically to the national headquarters in Beijing and plans to install more. Nevertheless, the public still suspects that the air reports in local newspapers and TV broadcasts are manipulated by local authorities. Residents of major cities need only look out the window, take a deep breath, and wonder how these reports can claim that the air is only “lightly polluted.” Poor air quality days similar to those that stirred up the public last January will almost certainly occur again.

This latest episode began June 1 in Shanghai when the director of the environmental protection bureau, while announcing that the city had begun to monitor and report PM 2.5 readings, complained that the U.S. consulate, which had gotten the jump on municipal authorities by beginning to issue its own readings in May, was breaking domestic regulations that require monitoring from multiple locations. The Shanghai CCP Secretary, Yu Zhengsheng, who as a Politburo member has considerable clout in Beijing, may have had a hand in pressing for a statement from central officials. Then on June 5, at a special Earth Day press conference, the Vice Minister of the Ministry of Environmental Protection escalated the complaint by accusing foreign diplomatic missions of violating international law by interfering in domestic functions. This critique had clearly been coordinated with the Ministry of Foreign Affairs, which echoed it the following day. Whether or not some higher authorities blessed this blunder is unclear.

Certainly, Chinese government officials resent the fact that urban residents have more faith in reports from the U.S. missions than they do in those from Chinese municipal governments. But lashing out at America only highlighted their inability to clean up China’s air and further eroded their credibility with the Chinese public.

New information technologies, moreover, create additional challenges to official pronouncements. iPhone users in China can cheaply download an application that displays air quality readings from their local government and the U.S. Embassy side by side. Prominent users of Weibo (China’s hybrid version of Twitter and Facebook) like Pan Shiyi, a real estate billionaire with more than 10 million followers, regularly repost air quality information from such applications on their Weibo accounts.

Obviously, the Chinese government’s attack on U.S. diplomats was not just about air pollution. China’s leaders’ anxiety about their political legitimacy has been heightened by the recent high-profile flights to safe haven in U.S. diplomatic missions of Chongqing security chief, Wang Lijun, and rights-defender Chen Guangcheng. When the propaganda authorities ordered Beijing newspapers to attack popular U.S. Ambassador Gary Locke in May, netizens objected and one of the papers sent an online apology to its readers. These incidents revealed the esteem in which many Chinese hold American diplomats.

Chinese leaders fear that somehow Americans might yet find more ways to make trouble in the lead-up to the leadership turnover at the upcoming Communist Party Congress. This fear is causing them to lose their footing and is worrisome for a number of reasons: It’s not just that Chinese leaders are willing to harm U.S.-China relations in order to bolster their domestic standing. It’s also that their actions are counterproductive in domestic political terms. If they can do something this clumsy with regard to air pollution, how will they handle other domestic events that have a bearing on Sino-U.S. relations that may yet crop up before the 18th Party Congress?