Debate: Are the U.S. and China Long-Term Enemies?

The debate largely turned on which factors will shape the relationship between the two countries. Will they clash in their pursuits of regional and global power, as Mearsheimer and Brookes, supporting the motion, argued they are destined to do? Or will American and Chinese diplomats avert a conflict by working together on issues of common concern, as Rudd and Daly said they have done successfully for several decades?

Mearsheimer contended that China would be “crazy” not to “try to dominate Asia the way we dominate the Western hemisphere,” while the United States is “not going to allow them to dominate Asia if we can prevent it.”

“China is going to be a potential peer competitor. And we’re going to have an intense security competition,” Mearsheimer said.

John Mearsheimer: China will have more power in 20 years & will be ready to use it #IQ2USLive http://t.co/dtUP91ITq2

Acknowledging that “the threat of enmity between China and the United States is real” and that “there is a rivalrous aspect to the relationship,” Daly said the two countries are nonetheless working together “in a way that we never did with the Soviet Union when we were containing it.”

“The U.S. is not containing China’s rise. In fact, we have promoted that rise. We have aided and abetted it,” he said. China, he added, is grappling with too many domestic challenges to compete with the U.S. for power and influence in East Asia.

What will #China settle for? Robert Daly @KissingerInst explains why China can’t have everything it wants #IQ2USLive http://t.co/eafwNLZPoZ

But Brookes pointed to potential flashpoints where serious disputes could arise between the U.S. and China, including Taiwan, the Korean Peninsula, the East China Sea, and the South China Sea. “Both sides are bracing themselves for confrontation, crisis, and possibly conflict,” he said. “Neither side is beating its swords into ploughshares. They are building new, and better, swords.”

After the four debaters delivered brief closing statements, moderator John Donvan asked the audience to vote for the more convincing side. Rudd and Daly, who had argued that the U.S. and China are not long-term enemies, came out ahead, having increased audience support for their position by 21 percentage points since the start of the debate — a substantial margin over the Mearsheimer-Brookes team’s gain of 5 percentage points. 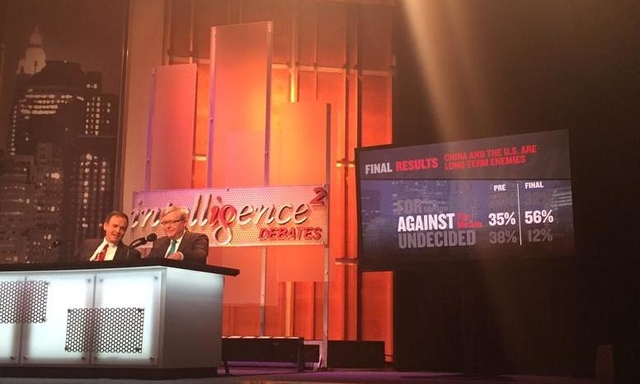