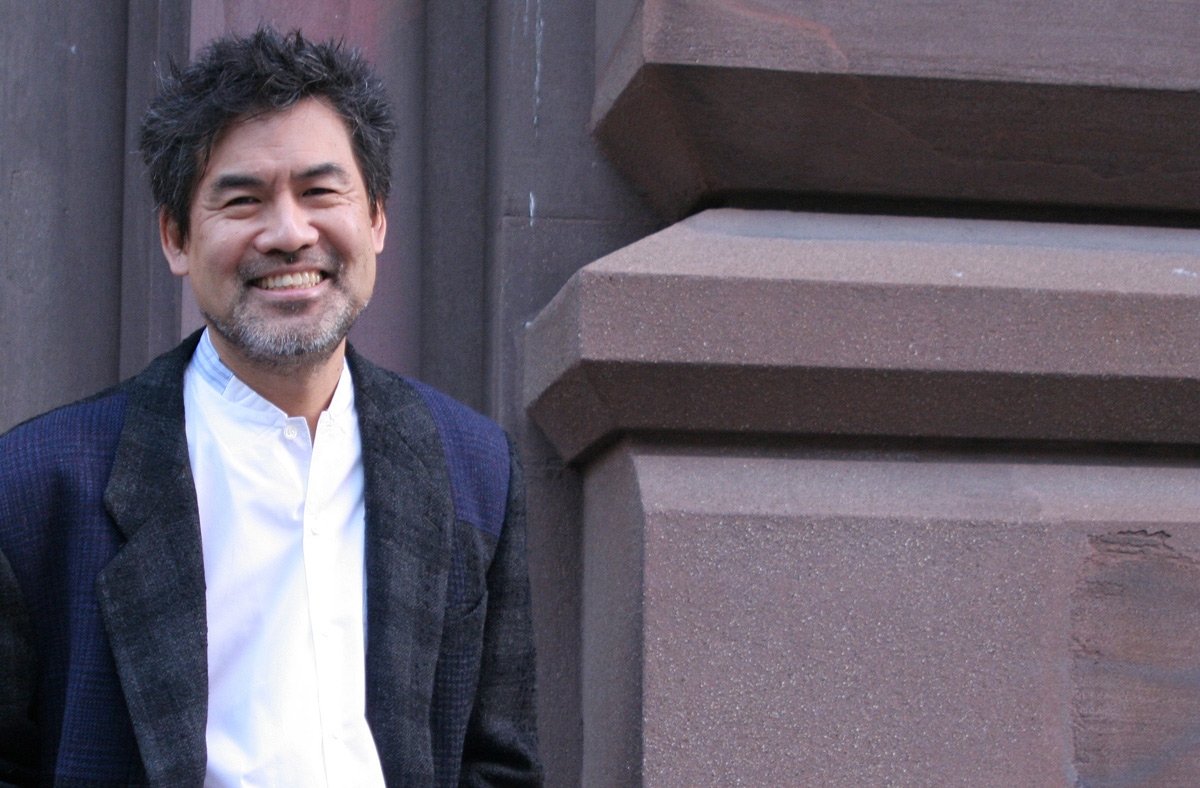 Rene Gallimard, a French diplomat posted to Beijing in the 1960s, falls in love with Song Lingling, an enchanting Chinese woman. The two carry on an affair for two decades until it is revealed that Song was not a woman after all — but rather a male spy exceptionally skilled at concealing his gender identity.

On Nov. 3, David Henry Hwang and Julie Taymor will discuss the revival of M. Butterfly with Asia Society's Rachel Cooper. A live webcast of the conversation will begin at 6:30 p.m. New York time.Learn more

The story of Gallimard and Song — inspired by a real-life incident that attracted international attention in the 1980s — forms the plot of M. Butterfly, a celebrated play by David Henry Hwang that debuted in 1988. In Hwang's telling of the story, Gallimard's ignorance of Song's masculinity served as a metaphor for Western perceptions of Asia.

Nearly 30 years after its debut, M. Butterfly is back: A new revival, featuring an updated script by Hwang and direction from Julie Taymor, debuted on Broadway on Thursday. Though much of the story remains the same, the America of 2017 — one in which Donald Trump is president and conversations about race and ethnic identity dominate the national discourse — has changed. So, too, has the world, one in which China's ascendance to superpower status was scarcely assured in 1988.

Asia Blog recently caught up with Hwang to talk gender, ethnic identity, and explore why the election of President Trump has given M. Butterfly fresh relevance.

Why did you originally decide to revisit M. Butterfly? How did the perspective of 30 years alter your perception of it? What did you feel most needed to change?

In retrospect, it seems I was in no hurry to revive it. I had passed on other opportunities, and many other successful plays from the 80's have already been revived. I felt that M. Butterfly was fortunate to have had an impact on the culture in the 80's, and wondered how it might be possible to at least hope for a similar engagement today.

The answer for me ultimately was to seek a production which would really reinvent the piece, and make it feel fresh. I was excited by the possibility of Julie Taymor, who has a visual sense and a grasp of theatricality second to none in the world today. Once we started talking, however, I realized that she is primarily focused on character and story. Julie suggested I consider re-looking at some aspects of the text, and I realized this was what I wanted to do as well. I feel the original version leaned quite heavily into the "big reveal" of Song's physical gender, which would feel neither as shocking nor as exciting today. This gave us the freedom, however, to look at the actual relationship between Song and Gallimard with greater nuance and detail, and to try and bring out Song's experience more in this new version, to hopefully arrive at a better balance between Eastern and Western experiences.

In the three decades since M. Butterfly’s debut on Broadway, China has emerged as a global superpower, one with far more visibility on the world stage than during the 1980s. How has this changed perceptions of the play? Does the message of the play depend, in part, on a certain power dynamic between Asia and the West?

I think the shifting power dynamic between China and the West interacts with the play in a different way now. America is such a performatively masculine culture that we still tend to feminize our perceptions of the "other." This may manifest itself in the Butterfly stereotype of submissiveness but also nowadays through the dragon lady trope of deceit and manipulation. When [President Trump] and others suggest that China's rise is a consequence of "cheating," they are evoking a dragon lady image: The East can only dominate the West if it refuses to play by the "rules."

Moreover, we now have a president who believes the way to deal with America's perceived enemies — e.g. North Korea, Muslim nations — is to apply more traditionally abrasive masculine power, echoing the play's line, "Orientals will always submit to a greater force." So we continue to gender-ize international relations. Since the election, I believe the play has only become more relevant, as this administration Makes America M. Butterfly Again.

Has the stereotype embodied by Song Lingling — that of an Asian man so demure that he is mistaken for a woman — maintained its salience over the last three decades? Or have attempts to raise awareness of this stereotype weakened it?

I certainly appreciate all the efforts over the past three decades to combat the emasculation of Asian males. That said, when was the last time you saw an Asian male romantic lead in an American movie or TV show? It's not unheard of nowadays, but still very rare.

Moreover, I think today we need to question the extent to which it even makes sense to regard masculinity — which as traditionally defined certainly has toxic and oppressive aspects — as a desirable goal. One thing we've tried to do in the new MB is to make the gender confusion less binary — more fluid — which feels to me more consistent with the wide range of gender expressions which we recognize today.

You mention the absence of Asian male romantic leads in television. How would you assess the overall progress — or lack thereof — of Asian Americans in the arts? How can more Asian American voices be heard?

I believe we are going through a golden age of Asian American playwriting. There are so many great younger dramatists doing amazing work. Very few of these authors — with the notable exceptions of Rajiv Joseph, Ayad Akhtar, the musical Allegiance, and this season's Young Jean Lee — make it to Broadway. So the task, it seems to me, is to continue to push for a more inclusive range of actors and stories on commercial stages, which is not only good for art but also makes more sense as a business model, in a changing demographic market — as TV shows and movies like the Star Wars franchise are starting to recognize.

What aspects of M. Butterfly’s revival have most benefited from the participation of Taymor, a director with extensive knowledge and understanding of Asian performing arts?

Julie indeed has a great deal of experience and knowledge of Asian performing arts. What's interesting, however, is that she did not create a particularly "Orientalist" production. Instead, I think the revival shows her regard and respect in the range of Chinese theatre forms which she puts onstage — two Chinese Operas in Act I, to a Red Guard Ballet in Act II. Her contribution to this revival is enormous in terms of conception and even text suggestions, but it's hard for me to parse the degree to which this stems from her background in Asian performing arts.