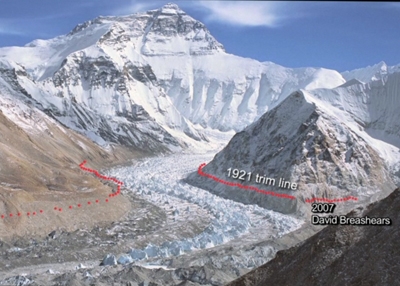 According to a recently leaked diplomatic cable, the Dalai Lama considers climate change the most pressing issue facing Tibet, and he urged the US government to assist in negotiating with China on the worsening environmental conditions in the region.

Re-printed in The Guardian, the cable states:

"The Dalai Lama argued that the political agenda should be sidelined for five to ten years and the international community should shift its focus to climate change on the Tibetan plateau. Melting glaciers, deforestation, and increasingly polluted water from mining projects were problems that 'cannot wait.' The Dalai Lama criticized China's energy policy, alleging that dam construction in Kham and Amdo have displaced thousands of Tibetans and left temples and monasteries underwater."

The Dalai Lama lives in exile for his advocacy for Tibetan autonomy.

Asia Society's Center on US-China Relations has also followed the progress of environmental degradation in the Himalayan and Tibetan Plateaus. The center recently unveiled a video, The Melt, which tracks the dramatically receding glaciers over the past several decades.

Do you think Tibet and China can put aside politics to cooperate on climate change? Leave your comments below.