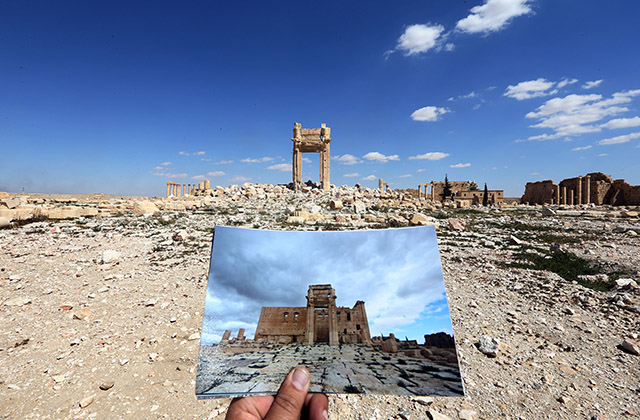 On March 31, 2016, a photographer holds his picture of the Temple of Bel taken on March 14, 2014 in front of the remains of the historic temple after it was destroyed by Islamic State group jihadists in September 2015 in the ancient Syrian city of Palmyra. (Joseph Eid/AFP/Getty Images)

Since terrorist organizations have emerged from the security vacuum left by the 2011 Arab Spring, “cultural crimes” — which include the looting, trafficking, or destruction of ancient artifacts and heritage sites — have become increasingly common in the Middle East. Examples include the bombing of the 2,000-year-old Temple of Bel in Syria, the bulldozing of the Sidi Sha’ab Mosque in Libya, and the ransacking of the Mallawi Museum in Egypt.

“Terrorist groups have recently institutionalized cultural crimes as an instrument of war,” according to a report released today by the #CultureUnderThreat Task Force. “Daesh [also known as Islamic State], the al-Nusra Front, al-Qaeda, and other terrorist organizations destroy cultural and religious sites not simply to intimidate the region’s diverse populations. They seek to erase the collective memory and very fabric of coexistence in the areas under their control.”

Following a forum on how to combat antiquities trafficking and destruction held at Asia Society in New York last September, the #CultureUnderThreat Task Force was established by Asia Society, the Antiquities Coalition, and the Middle East Institute with the goal of addressing the growing problem. The Task Force is comprised of experts with backgrounds in heritage, national security, and law enforcement. Their new report lays out the scope of the problem and what should be done by governments, NGOs, and private stakeholders to stop it.

The report notes that “cultural cleansing” serves two purposes for terror groups: It erodes shared identity, and raises cash through the illicit sale of artifacts — largely to buyers in the West. “Cultural crimes are closely linked to security threats, including transnational organized crime, money laundering, and international terrorist financing,” the report said, adding that satellite images suggest that more than 3,000 of Syria’s roughly 15,000 archaeological sites have been looted since the country’s civil war began, and that three to five million sites are at risk across the region. “Looting is as old as civilization. Yet in today’s Middle East, this destruction is taking place on an industrial scale, driven by a multi-billion dollar demand for ancient art.”

The report also says that the international community — the United States in particular — is failing in its response to the widespread looting and destruction. “The United States is one of the major sources of demand for antiquities — yet it is not doing its part. But it is not too late for action.”

Below is a summary of the task force's key recommendations:

For the [United States] federal government, the Task Force calls on:

For the international community, the Task Force calls on:

For the art market, the Task Force calls on:

To learn more about the #CultureUnderThreat Task Force, click here.

The full report is available for download here. (PDF)