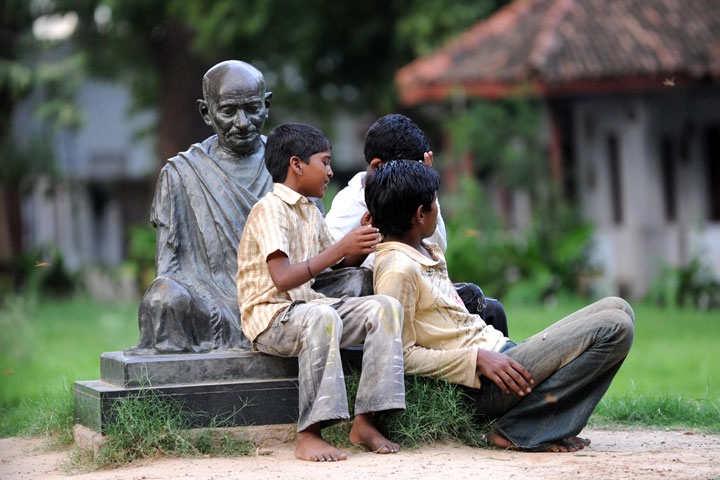 Great Soul — Mahatma Gandhi and His Struggle with India, the new book by Pulitzer Prize-winning former New York Times editor Joseph Lelyveld, has stirred controversy and anger in India over references to the Father of India's alleged racism, bisexuality, sexual perversion, and even political ineptitude that could actually have impeded India's independence struggle.

Among other details, the book includes disparaging terms used by Gandhi to describe black South Africans, and publishes the text of a letter from Gandhi to Hermann Kallenbach, a male bodybuilder and German-Jewish architect, demonstrating that the two men enjoyed an intimate relationship. Lelyveld's book is not the first to discuss Gandhi's unusual experiments with celibacy and other such sensitive issues, but as expected, these passages have provoked substantial outrage.

Gandhi supporters have denounced the book as blasphemy. Gandhi's native state, Gujarat, has already banned the book, and other states and the central government are mulling over following its lead. Union Law Minister Veerappa Moily said, "The government has taken a serious note of the book that has made disgraceful statement on the national leader. It is demeaning for the nation."

The author himself denies that the book accuses Gandhi of being a bisexual and a racist, and he insists that sensitive material was dealt with carefully and respectfully.

Gandhi's great-grandson, Tushar Gandhi, mounted a defense of the Mahatma. "Bapu was celibate. ... These Western writers have a morbid fascination for Gandhi's sexuality. ... It only helps them sell their books," he said."It is a very unkind act and should be avoided by all concerned. Gandhi was so open and that led him to misinterpretation and this is an example of that." He added that he has not read the book, and since the author has denied the allegations, he will make his final judgment after doing so.

Tushar Gandhi also told the Hindustan Times that banning the book is "the most un-Gandhian thing to do," and that the truth of Gandhi's life is open for all to see.

Joseph Lelyveld appears at Asia Society New York next Thursday, April 7, to discuss his book with Professor Arjun Appadurai of New York University's Media Culture and Communication department in the Steinhardt School. The talk will be a free live video webcast on AsiaSociety.org/Live at 6:30 pm ET.

What do you think: Are Gandhi's personal peccadilloes (whatever they were) relevant to his place in history? Does a man's personal life affect his ability to lead a political movement?