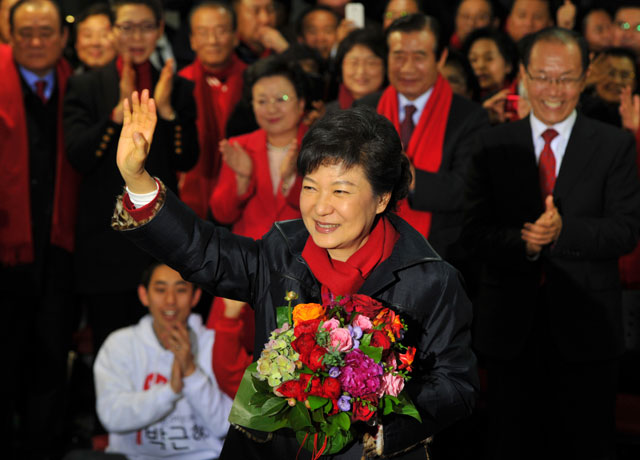 It was a momentous year of political transitions for Northeast Asia. In fact, every member of the Six Party Talks had an election, selection, or succession in 2012. In March, Vladimir Putin returned to the Kremlin as president after his hiatus as mere prime minister. In April, Kim Jong Un officially became head of North Korea’s highest organ of state (the National Defense Commission). In November, Barack Obama was re-elected President of the United States. A week later, Xi Jinping was appointed General Secretary of the Chinese Communist Party. In December, Shinzo Abe led Japan's Liberal Democratic Party to victory and assumed the prime ministership. Days later, Park Geun-hye was elected South Korea’s first woman president.

What can we say about this new batch of leaders? What kind of chemistry might they develop during the summitry of bilateral state visits and sideline discussions at multilateral fora? What are they looking for from one another, and how much are they prepared to give? What are their foreign policy priorities and strategic visions for Northeast Asia? Would they dare reconvene the Six Party Talks? If not, might they launch a new regional security initiative? Or will they stick to the status quo, a patchwork of alliance, partnership, and adversarial relationships?

Answers to these pressing questions will only emerge in the months to come. But now is an opportune moment to reflect on where these men and women come from, on the personal — and family — histories that will shape how they chart the region’s future.

What stands out is that no one from this new collection of leaders is new to the job. Putin is their elder statesman, having run Russia since 1999. Abe already served once as prime minister in 2006 — although he lasted only a year in office, setting the new norm in Tokyo of finding a new prime minister every year. As Abe was on his way out in 2007, Park Geun-hye very narrowly lost the conservative party presidential primary, earning her “presumptive candidate” status for this recent election, for which she’s been preparing ever since. Around the same time, Xi Jinping was tapped to join the Politburo Standing Committee as heir-apparent for China’s top position, while Obama was beginning to get momentum in the Democratic primary campaign that would eventually carry him all the way into the White House. By the time of Obama’s inauguration, Kim Jong Il had suffered a stroke, triggering the plan to transfer paramount leadership to his third son, Kim Jong Un. As a group, the members of Northeast Asia’s new leadership team are already practiced in the arts of power, and come into office with well-formed political characters — if perhaps not yet equally well-formed policies.

Even Kim Jong Un, the youngest leader by decades, has, as the grandson of North Korean founder Kim Il Sung and ablest son of Kim Jong Il, been groomed since birth for leading his nation. A key element of legitimizing the “Young Marshal” has been linking him to his grandfather’s legacy of resisting Japanese and American imperialism and leading the country out of the ashes of colonial occupation and the Korean War. Kim Jong Un has promised to deliver on making the DPRK a “strong and prosperous great country,” where the people “never have to tighten their belts again,” but the world is still waiting to see what kind of foreign relations he wants, and at what price, in order to achieve that goal.

North Korea is often singled-out as a throwback to a pre-modern world of hereditary dynasties, but another remarkable aspect of this new group is that princely pedigree and family roots in East Asia’s conflicted past run just as deep in the incoming leaders in Beijing, Tokyo, and Seoul.

Xi Jinping’s father, Xi Zhongxun, was a young war hero in the Anti-Japanese Resistance of the 1930s, and helped create Mao Zedong’s mythic guerilla base in Yan’an. Purged for being a moderate during the heyday of Maoist radicalism, Xi staged a dramatic comeback to prominence in 1978, when he helped Deng Xiaoping launch “reform and opening-up” in Guangdong Province. So far, Xi Jinping is playing up both the nationalist and reformist sides of his father’s legacy — his first trip as Party Secretary was to Guangdong, where he spoke about the need to press forward with economic reform as well as ensure a “strong army.”

Shinzo Abe’s ancestral mentor is his grandfather, Nobusuke Kishi, who fought against Xi and Kim, as “economic czar” of Manchukuo — Japan’s puppet state in northwest China — and then on Tokyo’s wartime cabinet. He resurfaced after the war as a leading right-wing figure, helping to create today’s Liberal Democratic Party, and became prime minister in 1957 — until mass demonstrations against his “autocratic tactics” in pushing renewal of the U.S.-Japan Security Treaty forced his resignation. Thanks to his grandfather’s efforts, however, Abe will have the U.S. treaty bound to stand by Japan if a dispute with China gets out of hand, and on a recent visit to Kishi’s tomb, Abe took an oath that "I'd like to succeed his wish to 'recover the true independence' (of Japan)” — a euphemism for revising Japan’s pacifist constitution.

Finally, Park Geun-hye is inseparable from the legacy of her father, General Park Chung-hee, who got his start by joining Japan’s Manchukuo Imperial Army in 1940. A year after Abe’s grandfather stepped down in 1960, Park’s father staged a military coup in Seoul, and ran South Korea with an iron fist until he was assassinated by his security chief in 1979 (Ms. Park’s mother was also assassinated, by a North Korea sympathizer, in 1974). General Park made bold foreign policy moves in the name of rapid growth — notably, with former minister Kishi’s help, normalizing relations with Japan in 1965 in the hopes that $800 million in economic assistance would bury the memories of Japan’s colonial occupation. Now, Ms. Park’s own boldness will be tested, at a time of rocky relations with Japan, China and North Korea — all for different reasons. “Father did his best, with a sense of calling for that era,” she said during the presidential campaign. “I will do my best in a completely different world.”

These complex histories of war and revolution, imperialism and nationalism, and development and democracy flow in the veins of the region’s new leaders. What lessons each leader has learned from their own political experience and from the legacies left by their fathers and grandfathers, and how they choose to act on those lessons, will help determine whether or not Northeast Asia moves in the direction of peace, prosperity, and reconciliation in the years to come.

John Delury is a Senior Fellow at Asia Society's Center on U.S.-China Relations and an Assistant Professor of International Studies at Yonsei University.
@JohnDelury