A Coming Thaw in Thai-Cambodian Ties? 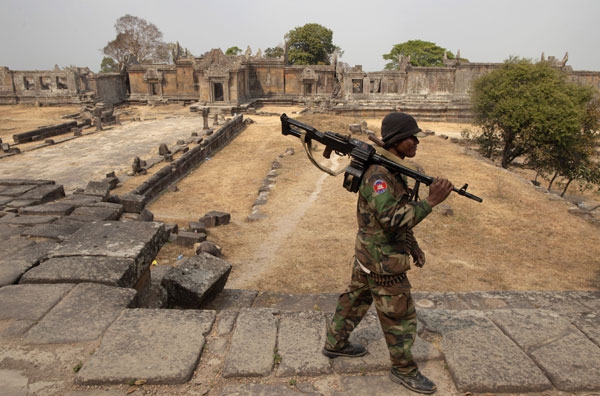 Yingluck promptly promised to "restore good relations with neighboring countries" — a swipe at the outgoing government of Abhisit Vejjajiva, which presided over a tense period of Thai-Cambodian confrontation over Preah Vihear temple and other disputed sites.

The border dispute became entangled with the red-yellow rivalry in Thai domestic politics in 2008.

That year, yellow-shirt protestors flayed the "red" Thai government of Samak Sunrdravej for supporting Cambodia's request to register Preah Vihear as a UNESCO World Heritage Site. Anger over the alleged softness of the Samak government contributed to its replacement later that year by the "yellow" Abhisit administration, which took a harder line on the temple dispute.

In an act of defiance, Cambodian Prime Minister Hun Sen welcomed the exiled red-shirt leader Thaksin Shinawatra to Phnom Penh to serve as an "economic advisor" in 2009. Thaksin's younger sister Yingluck doubtlessly remembers the gesture and appears poised to pursue a thaw in relations.

She may not find that change an easy one, however. Some members of the Thai military aligned with Abhisit and favor a tough approach to the temples. They will likely oppose a precipitous shift in policy from Bangkok.

That could contribute to further domestic instability in Thailand or lead to acts of provocation at the border as generals seek to command continued resources and political attention. This will be one of many immediate tests for Yingluck's political adroitness.

John D. Ciorciari is an assistant professor at the University of Michigan's Gerald R. Ford School of Public Policy and Bernard Schwartz Associate Fellow at Asia Society. John is currently in Phnom Penh.