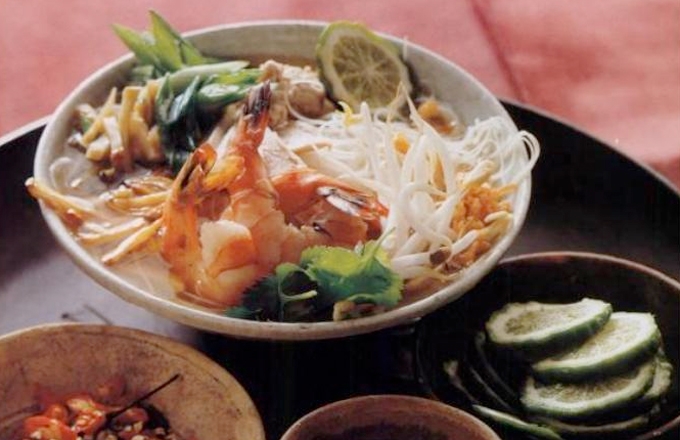 Bring the water to a boil in a large stockpot and add the bones, onion and carrot. Return to a boil, skim off any froth, reduce the heat to low and simmer for 2 to 3 hours, until all the flavor of the bones is released into the broth. Strain the broth and discard the bones and vegetables.

Meanwhile, simmer the pork or ham in a medium pot in water to cover for about 30 minutes, or until tender. Drain, thinly slice and set aside.

Heat the oil in a small skillet over medium heat and fry the garlic until well browned, 2 to 3 minutes. Remove from the oil and set aside.

Once you've strained the pork or chicken broth, add the sugar and salt, stir to dissolve and turn off the heat. Remove 1/2 cup of the broth to a small saucepan and cover the remaining broth. Simmer the ground pork in the small saucepan of broth over medium-high heat until cooked through, 2 to 3 minutes, breaking it apart as it cooks. Drain the pork and set aside.

To prepare the noodles, choose a medium-sized pot that can accommodate a strainer and fill it three-quarters full with water. Bring the water to a boil. Put the strainer in place so that it dips into the water and add the soaked noodles. Shake the strainer to make sure the water reaches all the noodles, let stand for about 2 seconds and then remove the strainer.

Divide the noodles among large individual soup bowls and add to each 1 1/2 teaspoons oil and about 2 teaspoons soy sauce, mixing well.

Put the remaining seasonings and garnishes and the sliced pork, fried garlic and ground pork in three small bowls on the table.

From here on out, people can create a bowl of soup to suit their own tastes, but the following is a general guideline:
In the center of the bowl, on top of the noodles, put 2 tablespoons cooked ground pork and a few slices of the cooked pork. Around the edge of the bowl, in small piles, arrange 1 1/2 teaspoons preserved cabbage, 1 teaspoon each of the fried garlic and scallions and a mound of bean sprouts. Spoon enough broth over all just to cover and sprinkle with some dried shrimp, cilantro, 1/4 teaspoon pepper, chilies and the cooked shrimp. Use chopsticks to mix the ingredients together, and enjoy.

Recipe excerpted from The Elephant Walk by Longteine De Monteiro (1998)