Chinese Netizens Liked Seeing Partisanship at State of the Union 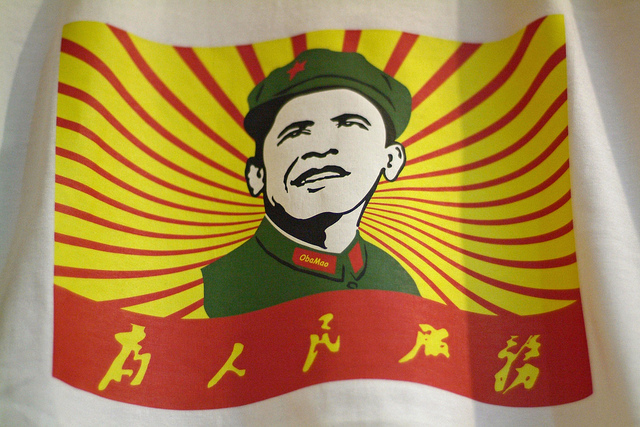 An "ObaMao" shirt for sale in Shanghai. (lincolnblues/flickr)

Congress may have a favorability rating lower than cockroaches in the United States thanks to its years of inefficient bickering, but the partisan dissonance exhibited at last night's State of the Union address was a sight for sore eyes for some users on Sina Weibo, China's microblogging platform.

Although some Republicans' unwillingness to offer even polite applause for the president's policy proposals will probably be seen by many Americans as yet another example of politicians' unending toddler-like behavior, Weibo users such as @xialujiazui found it refreshing compared to speeches by China's officials. "This is a normal Congress; there's no raising, clapping, or shaking hands or long enthusiastic applause in unison," said the microblogger. "Rather, there is an opposing party in Congress; while some people are moved to stand up and applaud, some indifferently sit uptight and still, and even turn up their nose."

Other users such as @weiboshi888 agreed, stating "The best part to see is one half of the people standing to clap, the other half sitting and not moving." According to @xiaoxuanfengbasiguangnian, "Even better are the facial expressions of Boehner and Biden behind Obama." Another user, @lantianbaiyunV, in a very non-jaded appraisal, was impressed that the address was "unpretentious with no 'officialese,' conventional talk, empty talk, or lies; it would be worth a study by mainland officials."

President Obama briefly mentioned China twice during the State of the Union in regard to investment in clean energy and overseas manufacturing, but users were most interested in his statements about the recent North Korean nuclear test, which has been a major topic of discussion on the website. According to Obama, "Provocations of the sort we saw last night will only isolate them further, as we stand by our allies, strengthen our own missile defense, and lead the world in taking firm action in response to these threats." Netizens reacted with a mix of exasperation with North Korea and wariness at America's role in the situation.

Some users gave a measured level of support for Obama to do something about North Korea's provocations. "Obama, you can take action, but don't involve China," said @xialiangzhuLY. "Hurry up and get rid of Third Fatty," said @maigeleishao, referring to the clever nickname often used on the website to refer to Kim Jong Un.

Others were much more critical of Obama’s statements, however. "He really thinks he is God,” complained @leijingyu, while @yijiangnan worried about a "return to the Stone Age," most likely referring to a fear of nuclear war. User @54tiandiguyingrenwoxing expressed skepticism at Obama's statement that the U.S. should strengthen its missile defense in response to North Korea, stating, "Reinforce the missile defense system? Is North Korea able to beat America? What a joke."

For many, news of Obama's statement was mainly another opportunity to criticize America's behavior as a world power and its role in the Asia-Pacific region. Although Obama didn't mention Iraq during the address, @weiguanqunzhong1983 sarcastically pointed out, "The reason for invading Iraq was weapons of mass destruction, but it turned out there were none; now North Korea definitely has them, so why not attack?"

A particularly grim assessment of the situation came from @xinlixuezhuzhuohong, who argued, "North Korea's nuclear test gives America the excuse to deploy a defense system in the Asia-Pacific region and gives Japan an excuse to strengthen its military. This would be unfavorable to China. If China punishes North Korea, there will be animosity and we will lose a friend and danger will be increased. This will be of equal detriment to China. If China continues to be in favor of North Korea, it will be isolated by every other country, which is still detrimental. If North Korea starts a nuclear war, it will lead the peninsula into war and America will definitely enter a nuclear war, which would be even more unfavorable for China."