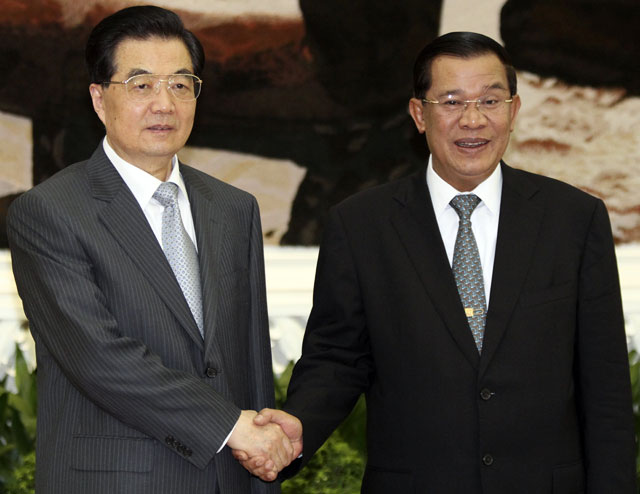 Then-President of China Hu Jintao (L) is welcomed by Cambodian Prime Minister Hun Sen (R) in Phnom Penh on March 31, 2012. Hu arrived in the Cambodian capital on March 30, on a state visit to bolster ties between the already close nations. (Pring Samrang/AFP/Getty Images)

The status of human rights in Cambodia is declining from an already dire state, and China holds a lion’s share of blame.

For decades now, Western donors have been giving Cambodia hundreds of millions of dollars each year — almost $20 billion since 1992.

Year after year, Cambodian government leaders attend the pledge conferences, holding out their hands. But first they have to listen as Western ambassadors and aid officers stand at the podium, look them in the eye and lambast them for rampant corruption and jaw-dropping human rights abuses.

Each year, Prime Minister Hun Sen promised to reform, but little ever changed. Still, the government managed to maintain a democratic facade — a moderately free English-language press and a variety of civil society institutions including several human-rights groups — so the donors could find reason to continue giving the money anyway.

"There's a free press," a senior specialist with the World Bank once told me. "You don't find that in other states — Laos, Vietnam. There's a developing civil-society network. So, in the parlance of the donor community, these are the champions."

Those journalists and civil society groups wrote primarily in English, which meant that hardly any Cambodians could read what they were writing. Illiteracy is widespread in the state, so even Khmer versions were inaccessible to most.

But now the government, always unhappy with criticism, seems unwilling to accept it in any language at any time. With all that Chinese money pouring in — more than $8 billion in the last few years — the government no longer seems to think it's necessary to keep up that democratic facade.

In September, Mam Sonando, a 71-year-old radio station owner, was sentenced to 20 years in jail for criticizing the government on air. He'd been broadcasting for decades.

At about the same time, newspaper journalist Hang Serei Odom was found dead in the trunk of his car, hacked to death with an axe. He had been writing about illegal logging, a longstanding problem in Cambodia. Hang was the first journalist killed there in four years.

Is it any coincidence that these and several other repressive acts came days after Hun Sen visited Beijing and came away with promises of as much as $5 billion more in loans and grants over the next five years?

For several years now, China has been working to curry favor in whichever Southeast Asian states it can, trying to counter American influence in the region — particularly now that Beijing is fighting the bitter diplomatic war with several nearby nations over the South China Sea.

All of that Chinese money for Cambodia comes with no hectoring from Beijing about human-rights abuses, endemic corruption, home seizures, arrests and murders of dissidents or the many other problems that are rife in Cambodia — and China, too. As Hun Sen once put it: "China respects the political decisions of Cambodia. They build bridges and roads, and there are no complicated conditions," adding that "China talks less but does a lot."

That’s a 180-degree change of view for Hun Sen, who once called China "the root of everything that is evil" in Cambodia because of Beijing's longtime support of the Khmer Rouge.

Chinese leaders clearly have little concern about human rights in Cambodia — or in their own country, for that matter. But all that money doesn't come with no strings. That was clear in July, when delegates to an ASEAN summit arrived in Phnom Penh to find billboards along the highway from the airport honoring Chinese President Hu Jintao, along with hundreds of tiny red Chinese flags hanging everywhere.

Hu had visited Hun Sen in Phnom Penh a short time earlier, but neither country said anything meaningful about their discussion. In the region, however, speculation centered on China's concern that the ASEAN states would want to put out a joint statement criticizing China for the ongoing the South China Sea dispute. Hu wanted Hun Sen to be sure that did not happen.

Well, Hun Sen did manage to keep the subject off the agenda. And when the meeting ended, ASEAN issued no joint final statement at all, for the first time in its 45-year history. Cambodia holds the forum's rotating chairmanship through the end of 2012.

ASEAN held another meeting in Phnom Penh in November. This time, China's Prime Minister, Wen Jiabao, attended, as did President Obama. Even with Obama there, Hun Sen read a statement asserting that the group had reached consensus: The South China Sea controversy would not be "internationalized" — meaning that each ASEAN nation would have to negotiate with China on its own. Several ASEAN members complained that they never agreed to this conclusion.

Vietnam, Indonesia, the Philippines and other states all are angry about China's continuing assertion that it controls almost the entire South China Sea, including nearly all of its islands, islets, and potential mineral resources. ASEAN is the only forum where all the aggrieved nations could speak with a unified voice.

But given that Cambodia is now a virtual vassal state of China, Hun Sen gave no ground this time, either. As Xinhua, China's state-run news service, reported, Wen thanked Hun Sen for his "important role in maintaining the situation of overall friendly relations between China and ASEAN."

In Washington the same day, Assistant Secretary of State Kurt Campbell warned that Washington will not shy away from raising serious concerns about human rights abuses in Cambodia.

During a tense private meeting with Hun Sen during his stop in Phnom Penh in November, Obama aides said the President did press the Prime Minister to release political prisoners, stop land seizures and hold free and fair elections — principally to satisfy human-rights advocates in and out of government who had urged him to make that case. He said none of that in public.

The United States knows full well that Cambodia is an unredeemable brutal dictatorship. Still, it tries to maintain passably friendly relations. That's only because Washington has more or less given up on the state.

Joel Brinkley, author of Cambodia's Curse: The Modern History of a Troubled Land, was an honorable mention for this year's Bernard Schwartz Book Award.

Joel Brinkley is a professor of journalism at Stanford University and author of Cambodia's Curse. A former New York Times reporter, he holds a Pulitzer Prize for his coverage in Cambodia.
@joelgbrinkley