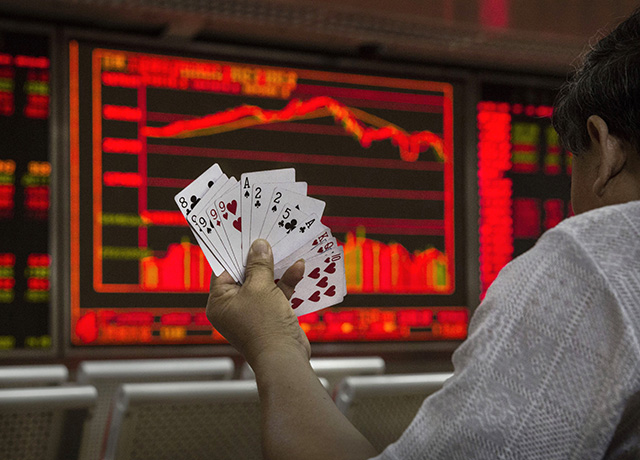 A Chinese day trader plays cards with others as he watches a stock ticker at a local brokerage house on August 27, 2015 in Beijing, China. (Kevin Frayer/Getty Images)

Since Chinese leader Deng Xiaoping launched economic reforms in 1978, the country has grown from an impoverished, rural backwater to the world's second-largest economy, one whose modern cities are filled with dazzling skyscrapers. But the formula implemented by the Chinese Communist Party — massive infrastructure, urbanization, and the manufacturing of cheap goods for export — may no longer be working. In 2015, China registered GDP growth of 6.9 percent, its lowest figure in 25 years — and a number that some observers argue is grossly inflated. The Chinese government's measures to halt this slowdown — including last summer's controversial interventions in the country's stock market — have spread fear that China is at risk of a "hard landing" that may destabilize global markets.

On Wednesday, April 20 at 6:30 pm, Asia Society New York will host a discussion of China's economic future with Jamil Anderlini, Richard McGregor, and Lucy Hornby of the Financial Times, George Soros, and Orville Schell. The event will be available globally via a free live webcast.Learn more

The journalist Jamil Anderlini, now the Financial Times Asia editor, has covered the Chinese economy extensively over the past two decades. In advance of his appearance Wednesday evening at Asia Society New York alongside his FT colleagues Lucy Hornby and Richard McGregor, financier George Soros, and Asia Society's Orville Schell, Anderlini spoke to Asia Blog about China's slowdown and its effects on the country's politics and society. The conversation has been edited and condensed for clarity.

The short documentary film produced by the Financial Times — The End of the Chinese Miracle — argues that the formula that propelled China to such remarkable economic growth may no longer be working. Is there anything the Chinese government can do to reinvigorate this growth? Or are they just a victim of their own success?

There's a lot the Chinese government can do to mitigate this trend, but not much they can do to reverse it. For example, they could loosen the hukou system [China's national household registration system that classifies citizens as urban or rural residents], allow it to break down a little or even remove it. That would allow people to move freely around the country.

Of course, doing this would cause enormous problems. The giant cities for example, conurbations like Beijing, Shanghai, and Guangzhou, would be overwhelmed by new people coming and permanently staying.

It's worth pointing out that the hukou system is seen as very unfair — rural residents are classed as second-class citizens and don't have the same rights that urban residents do. But if you didn't have this system, this level of social control that the Communist Party still maintains, what you'd likely have is what you find in countries like India, Indonesia, and Brazil, where the urban population would increase and create slums. China has slums, but they're not the kind of slums — permanent, multiple generations of endemically poor people who have little or no hope of getting out — that you have in these other countries.

So while there are things the Chinese government can do to halt this trend, the results may be worse than the end of the “migrant miracle,” as we’ve called it. Think of cities like Beijing, which is already low on water. Imagine if there are 20, 30, 40 million people moving there overnight, permanently. You’d have even more problems.

Over the last few years, we've seen the Chinese government maintain high growth rates afloat through tools like shadow lending and municipal debt, which have led to the creation of asset bubbles in the country. Do you anticipate this situation changing? Is there a scenario where Beijing decides, “we’re going to let the economy slow down more drastically and it’ll just be the new normal?"

No, definitely not. What we're seeing now is the most amount of pain the Chinese government is willing to take. They’d pretty much be able to do anything to keep growth where it is now, including reversing all the reforms they've talked about and cranking up debt even more. There’s no way they’re going to allow growth to slip much below the current levels —they’ll do their best to keep it at this level.

Is that because they’re afraid a slowdown would have political consequences? Or is engineering fast growth simply embedded in Communist Party operations, and is how incentives within the Party are aligned? What do you think accounts for their fear?

It’s a fear of revolution. You have to understand —the Chinese Communist Party sees revolution around the corner every single day, and that's what they're most afraid of. The only reason that growth is embedded in the Communist model is because of that fear. Right around the time of the collapse of the Soviet Union, or slightly before, the Chinese government decided that to avoid this fate Beijing would have to maintain growth and social stability, which, in their minds, is the same thing. They're constantly worried about political instability, unrest, uprisings, rebellions, and revolution.

Do you think these fears are founded?

Yeah, I do. They’re absolutely founded. If you talk to people in China, they understand very clearly that the only source of legitimacy for the Communist Party today is that they can produce growth, and without that they have no legitimacy. Otherwise they’d be thrown out, most likely in some sort of internal coup where their colleagues would get rid of them. I don't think we’re likely to see an armed uprising, with weapons and guns, because the Party’s control of the population from the grassroots all the way to the top is very, very tight. But there could be a lot of internal strife at the top layers of the party.

One of the Party's goals, going back almost a decade when then-Premier Wen Jiabao famously called the Chinese economy "unstable, unbalanced, uncoordinated, and unsustainable," has been to boost consumption and making it a larger part of overall growth. How is this going? Is this plan working?

What you’re seeing is a rebalancing, of sorts — as everything slows, some things slow more than others. But is rising consumption enough to pick up the slack from the initial emphasis on investment? No, of course not. You can’t say that consumption will take over from investment. They’re reliant on each other. Because what is consumption? It’s people spending money to invest in things and make things and consume things. What you’re not going to see is a sudden, rapid, transition to a new growth model that will solve all their problems.

Have you noticed any shift in Chinese people's attitudes optimism about the country's economic future? Are people becoming more pessimistic?

It's hard to make generalizations about the mood in Beijing because it changes very quickly. And it’s very hard to make broad statements about the Chinese mood in general, because we don’t have access to good census information or trustworthy polls that aren't influenced by Chinese propaganda. It’s very hard to get good opinions about China as compared to other countries.

I'd say people are much less optimistic about the future, especially in the middle class and the wealthy. People are voting with their feet. I don’t know any wealthy Chinese friends who don’t have an exit strategy or who haven’t already left. It’s anecdotal, but you see it across the board. People are leaving in droves.