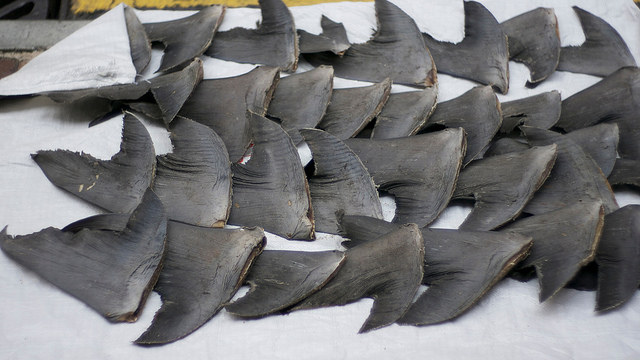 CNN reports today that China has approved a ban on shark fin soup at government banquets. The ban will take three years to enact. Social media took off on the story, from both the Western world on Twitter, and in China on Weibo. However, their reactions had very different concerns, and reflect very different angles on the announcement.

On Twitter, most reactions to the news were positive, citing the ban as a great first step toward a better attitude toward conservation and animal welfare.

However, not everyone was so enamored, especially due to China's less than reputable record regarding the manufacture of synthetic foods.

Reactions on China's microblogs have been far more vocal — amassing some tens of thousands of posts in one day, most of them very cynical.

"Shark fin is only one dish in the range of exotic delicacies in China. There are still  bear paws, armadillos, birds' nests, and monkey brains," posted 老缅翡翠.

Lavish government spending on delicacies was also a great concern. 此时此刻Sun: "When they eat such delicacies as bird nests, they are eating from the blood and sweat of the people!"

Still, others were confused why it would take three years to implement the policy. 吕N帆

posted: "Why the heck would it take three years? Are you trying to eat the sharks into extinction before then?"

Some bloggers thought the policy won't be enforceable, since there is so little oversight on government officials, especially on what they eat. 口香榶: "Whether they eat it or not, nobody can tell! What a farce."

Still, others pretended the announcement actually was a farce — as Curious_蒋 wrote, "Okay we'll stop eating shark fins. Just use them to rinse and gargle."