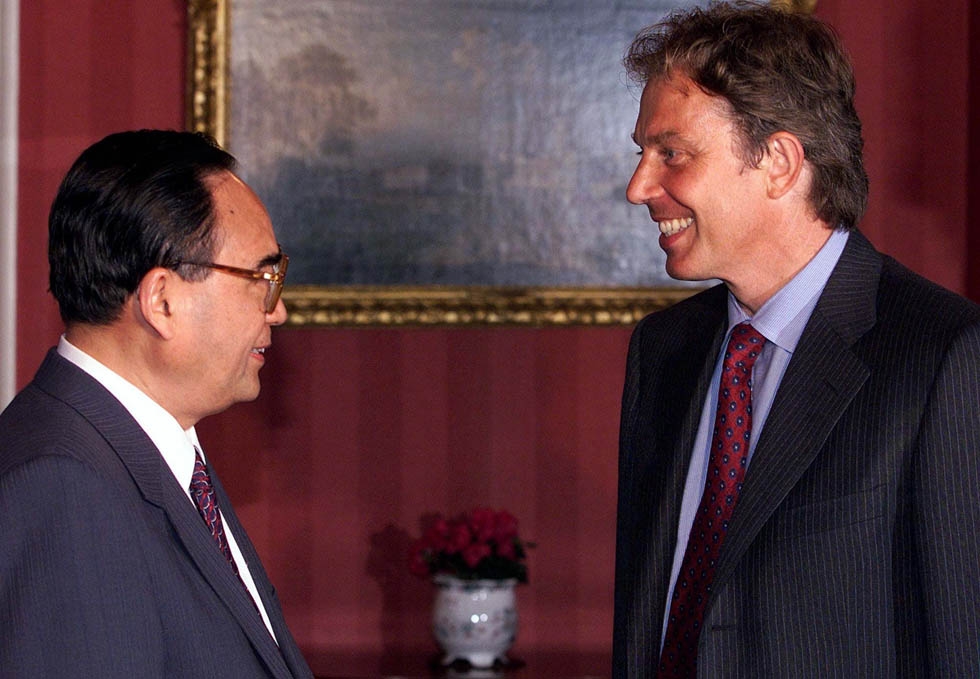 Monday’s top story was the torrential rains and flooding that thrashed Beijing over the weekend and left at least 37 people dead. Only one non-flood related news item made the cut for the front page of the Beijing Daily, the local Party-controlled conservative newspaper, that day — the passing of former head of the Central Propaganda Department, Ding Guan’gen. According to the announcement made by Xinhua, China’s state news agency, Ding died on Sunday, July 22 in Beijing of an unspecified illness. He was 83.

These two top news items (according to the Beijing Daily, that is) — Beijing’s flooding and Ding’s passing — are not as unrelated as one might think. What’s missing in the severely abbreviated obituaries that have thus far been published about Ding is full consideration of the depth of his impact on China’s contemporary propaganda and thought work system. Ding, a former Politburo member who served as head of the Central Propaganda Department from 1992 to 2002, featured prominently in the remaking of China’s propaganda system in the post-Mao era. During his 10-year tenure as propaganda czar of China, he infused the system with his conservative ideology as he presided over the development of China’s film industry, commercial media, and importantly, the rise of the Internet in China throughout the 1990s.

Thus, as Danwei’s Jeremy Goldkorn points out in an essay on Chinese media coverage of the flooding, there is no question that the former propaganda czar would likely have ”approved of everything else on the [Beijing Daily’s front] page,” which featured a headline that read “Make the disaster relief, cleaning up the aftermath and stability maintenance the work priority,” as well as three prominently displayed headshots of Beijing’s “most beautiful people” who lost their lives in the flood rescue efforts. This is because a large part of the foundations of China’s contemporary propaganda and thought work system can be traced back to Ding and his ultra-conservative attitude toward the role of media and propaganda in society. It was this very commitment to ultra-conservative policies — and to playing bridge, a beloved hobby of Deng Xiaoping’s — that allowed Ding to win the favor of first Deng and later Jiang Zemin. Ding’s conservative attitude toward the role of the media and propaganda in society is evident in a talk he gave in 1993, one year after he assumed the top departmental position, during which he outlined his view of the Central Propaganda Department’s role:

We are a department in charge of political work, we don’t directly make any products. We mainly provide spiritual impetus, intellectual support and positive public opinion for [China’s] economic development. We aim to make Party policies become the masses’ conscious actions and kindle the masses’ positive thinking and creativity, to unite all forces which can be united, arouse all positive elements, transform negative forces into positive forces and mobilize them to throw themselves into economic construction and reform and opening up.1

Though largely couched in Mao-era rhetoric, Ding’s speech reflects a major shift that took place in CCP thought in the 1980s. No longer was the propaganda system seen as merely a tool to be mobilized toward the transformation of China into a socialist system. Instead, the system was to be used as an instrument to achieve the goals of the Deng-led market transition — the creation of a good market environment and the encouraging of foreign investment.

To this end, Ding encouraged plans to expand the media and technology industries, supporting the creation of the relatively liberal Guangzhou-based newspaper Southern Weekend and CCTV’s investigative news program Focus. But even the most liberal publications and programs were still subject to Ding’s particular interpretation of press freedom. “Freedom does not mean that a person can say what he thinks,” Ding told a press delegation from Hong Kong in August 1994. Freedom, he said, can only be exercised within the framework of the law, which “each country establishes according to its conditions.” As a result, hundreds of media outlets were closed down or purged throughout the 1990s.

In contrast to his predecessors, Deng Liqun and Wang Renzhi, Ding displayed little tolerance for debating with Chinese intellectuals. He sought instead to ban all debate he considered harmful to the government and the Party. As a result, his name lent itself to popular Chinese puns about his obsession with monitoring and censoring (ding) all dissenting opinion, locking up (guan) dissidents, and tracking and controlling (gen) the media.2

With films, Ding trumpeted a similarly conservative doctrine, stressing in a talk in 1996 that “films should have the function of making audiences love the Party and socialist country, rather than arousing their concern and dissatisfaction.” Under Ding’s watch, annual film production declined from more than 145 films in 1995 to only 110 films in 1996, the lowest number since 1990.3 Critically-acclaimed films such as Wang Shuo’s I Am Your Dad and Feng Xiaogang’s Living a Miserable Life were banned, presumably on the grounds that they were considered to be lacking in ideological rectitude.

Ding’s immediate successor and current propaganda chief Li Changchun has largely continued in the conservative precedent set by Ding beginning in the early 1990s. Recent news of the crackdown by State Administration of Radio, Film and Television (SARFT) on online videos and the prolonged struggle between liberal-leaning domestic newspapers and the propaganda department are evidence of Ding’s imprint on the trajectory of the propaganda and thought work system in China. More than 10 years after his retirement and now even after his passing, the legacy of Ding Guan’gen is a hardwearing legacy that continues on today.