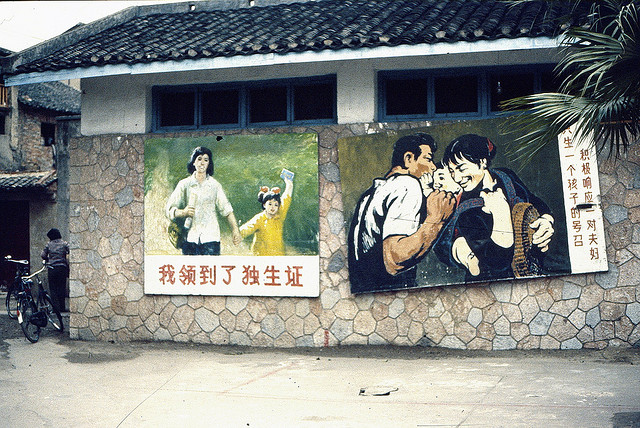 Before getting pregnant with her second child, Lu Qingmin went to the family-planning office to apply for a birth permit. Officials in her husband's Hunan village where she was living turned her down, but she had the baby anyway. She may eventually be fined $1,600 — about what she makes in two months in her purchasing job at a Guangdong paint factory. "Everyone told me to hide so the family-planning people wouldn't find me, but I went around everywhere," she told me. "In the past, that place had very strict family planning, but now the policy has loosened. The cadres worry that there are too many only children here." I asked her if government policy had factored into her decision to have a second child. "It was never a consideration," she said.

Lu Qingmin, or Min, is typical of the migrant workers I met while researching a book in the factory city of Dongguan. Born in one place, working in another, and married into a third, they are as adept at moving between worlds as the frequent-flying global élite, with the difference that they have never left their home country. The Chinese government, which is good at transmitting edicts from Beijing down through the provinces to counties and villages, isn't set up for people who don't respect borders. Married migrant women are required to send home a certificate every year confirming that they are not pregnant; Min has never done this. Her older sister, who works in nearby Shenzhen, also has two children. The owner of an apartment that I rented in Dongguan from 2005 to 2006 had two children; so did a businessman who gave me a tour of the city's karaoke bars. "Most of my friends have two children, except the ones who have three children," Wu Chunming, a migrant who has lived in the city for 19 years, told me. "In the villages now, having two children is standard."

For so long a symbol of the authoritarian state at its most coercive, China’s policy limiting most families to one child is slipping into irrelevance. Last week, the government announced it would merge the National Population and Family Planning Commission, which has overseen the policy for three decades, into the Ministry of Health — a tacit admission that limiting births no longer requires the scrutiny and enforcement it once did. Most observers see this as a first step toward dismantling a policy that has already been rendered inconsequential by increased mobility, rising wealth, and the sense that stringent controls are no longer necessary. Wealthy Chinese can travel to the United States to give birth, which also confers the bonus of American citizenship on the child. Couples one step down the economic ladder may have a second child in Hong Kong, Macau, or Singapore. Families with two offspring are commonplace among the country's millions of mobile entrepreneurs; an estimated 150 million rural migrants enjoy similar freedoms. Even in the countryside, where heavy penalties and forced abortions were more prevalent in the past, officials are loosening their grip. In my conversations with rural Chinese people over the past several years, it has become clear that fines that were once prohibitive are now just a nuisance — a couple of months' wages, rather than a lifetime of savings.

The one group that still sticks to the letter of the law are the country's traditional élite: urban residents with proper household registration, or hukou, often in government jobs, who risk punitive fines and dismissal from their jobs for violating the law. In Dongguan, the penalty for a second child in a hukou–holding family can be as high as 200,000 yuan, or $31,000; any woman with a child must have an ultrasound every three months to ensure she is not pregnant. A friend of mine in Shanghai had two abortions in the years following the birth of her daughter. "A lot of entrepreneurs, including some of my friends, have two children," she told me. "But we both work for government units, so we can't."

Officially, the policy remains the same. In 2004, a group of social scientists petitioned Beijing to relax the one-child rule, eventually allowing all families to have two children. After 30 years, they argued, the policy had lowered fertility and raised living standards; now China faced the opposite problem of an aging population with too few young people to support them. The government turned down the proposal, fearful of igniting a population explosion. In 2009, these experts tried again, this time presenting evidence that any loosening would not cause a sudden spike in births; they petitioned the government again last year. Beijing has still not approved any changes.

Yet this long-running and inconclusive debate is having unexpected results. When I visited the city of Chongqing over a year ago, a local official told me out of the blue that Beijing might soon announce a national two-child policy. "We are eagerly awaiting that," he said. In Dongguan, one person told me that anyone could have two children five years apart; another said that any resident of a major city who had a daughter could now have a second child four years later. None of these things is true. But they reflect a widespread feeling among officials and average people that draconian controls are no longer needed. "China's population is aging very fast, so there will be too many only children in the future. So the policy does not have to be as strict as before," I was informed by my migrant friend Chunming, a saleswoman for a chain of traditional-style teahouses. She is unmarried and has no need to know about family-planning policies, but she sounded as authoritative as a government spokesman.

"But they haven't formally changed the policy?" I asked her.

"No. The policy has not been formally changed," she said. Then she added, "China's laws toward births have never been that strict, that's my feeling. Different places have different policies." That was true, too. The one-child policy was born of a 1980 Communist Party directive urging Party members to "encourage" families to have one child; it was strictly enforced in large cities, where the single-child family soon became standard. But because of stiff resistance from farmers, who wanted sons to work the land and carry on the family name, provinces were granted latitude to adapt the rules as they saw fit. Some rural areas permitted couples to have a second child if the first was a girl; others allowed two children across the board. Of all the rural migrants I knew in Dongguan — all born after the policy went into effect — not one was an only child.

Chunming introduced me to Xu Xiang, a sales agent for latex manufacturers who has two daughters, aged eleven and seven. "About the only people who have one child are government officials," he told me. "For them to break this law is like for an American to violate the constitution." Yet no one he knows wants more than two children, and over two days of failed effort to meet his daughters, I began to see why. They were too busy — with math tutoring, drawing class, piano lessons, and taekwando. They attend a private school where every subject except Chinese is taught in English from the first grade. The older girl is on track to get into the best middle school in the province. She wants to go to Harvard or Oxford.

After two decades in Dongguan, Xu Xiang's hukou is still in his native Guangxi, which means that no one is monitoring the size of his family. "But what's the point of having seven fairy maidens if you can't educate them properly?" he asked me. Such sentiments explain why variable enforcement of the policy has not led to a boom in childbearing. The ideal family, of two parents feverishly pushing one or possibly two offspring to excel, has already been internalized as the norm.

Demographers estimate that a Chinese woman today will have 1.5 children on average over her lifetime, one of the lowest fertility rates in the world. In Dongguan, I met couples who skirted the law to have two children. The opposite trend is taking place elsewhere. Even couples permitted to have two children — for example, when a husband and wife are both only children — are choosing to have just one, or they are remaining childless. A study in Jiangsu province found that only ten percent of couples eligible to have a second child have had one; the rest said it would be too expensive. "People's behavior in childbearing has become diversified, along with everything else in a market economy," said Gu Baochang, a professor of demography at the Center for Population and Development Studies at the People's University in Beijing. "Some people don't want children at all. Others just strongly want to have two children. Some want more than two."

I lived in China from 1998 to 2007, and the longer I stayed, the more I felt that governance was a frantic effort to keep up with what was happening on the ground. The economic opening championed by Deng Xiaoping was actually set in motion in 1978 by a group of Anhui farmers who illegally split up their communal farmland into individual plots, which led to increased efficiency and the dismantling of the communes. In an age of reform, the government's role is often to pass laws to "legalize" entities (such as foreign Internet investors or private book publishers) that already exist. So when Beijing finally gets around to abolishing its one-child policy, as its latest actions suggest will happen, it will likely find that the ruling has almost no impact.

Min was born in 1986, six years after the one-child policy came into effect. She is the second of five children, a reflection of lax enforcement of family planning in the Hebei farming village where she grew up. (Min's father told me that one family in the village had six children; another man, who had fathered seven children, had been the village chief.) Min herself, along with everyone she knows, has two children. When history's largest social experiment in state-regulated childbearing comes to an end, it will have been borne disproportionately by the Chinese urban middle-class. The elaborate machinery built to enforce these policies barely touched Min at all. She was ignored by the government, living at the margins — in China, that's often the best place to be.

Leslie T. Chang lived in China for a decade as a correspondent for The Wall Street Journal. She has also written for The New Yorker, National Geographic, and Condé Nast Traveler.
@LeslieTChang