Is Japan's Commitment to Pacifism Wavering? 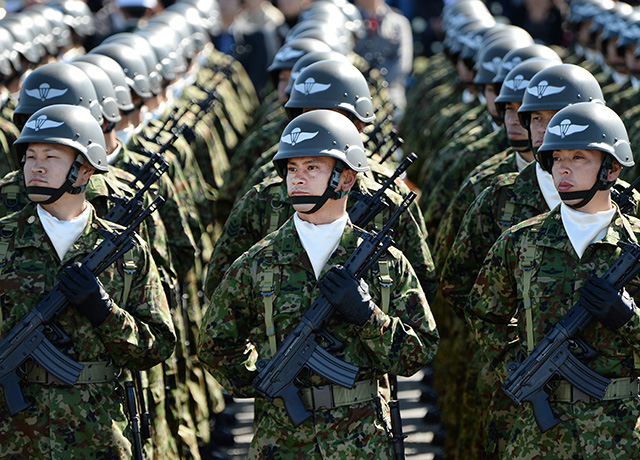 Last September, Japan’s parliament introduced new laws that would allow for a broader interpretation of Article 9, a clause in the country’s constitution that strictly limits military action to self defense. The changes were met with protest both domestically and internationally. In Japan, many citizens worried openly about the risk of combat violence and, more generally, the rise of reactionary governance in the country. The Chinese government has also objected, saying through state-controlled media that the legislative shift is a “brutal violation” of peaceful development and regional stability. South Korea expressed concern as well.

Despite these concerns, however, many experts believe worries of World War II-style militarization are overstated.

On February 3 at Asia Society in New York, Kevin Rudd will be joined by Japanese Deputy Foreign Minister Shinsuke Sugiyama to discuss the regional and global consequences of Japan’s new security posture. The event will be live webcast starting at 8:30 AM.Learn more

“[There’s] no big difference from last year, or the year before,” Yuki Tatsumi, an East Asia senior associate at the Stimson Center in Washington, D.C., said. Tatsumi believes that changes to Japan’s pacifist stance are mostly embellished, and that even prior to the controversial reinterpretation of Article 9 the country was already concerned with “gray zone” emergencies. These threats — defined as those requiring robust law-enforcement activities but short of armed provocation by a foreign military — include maritime disputes with China and brinksmanship over North Korea’s nuclear development.

Last year's legislative changes, pushed by conservative Prime Minister Shinzo Abe, allow for Japan to send its military overseas under three conditions: Japan or a close ally is attacked, threatening the country’s survival and posing a clear danger to its people; there is no other appropriate means available to repel the attack; and the use of force is restricted to a necessary minimum.

But Tatsumi maintains that there isn’t a present-day scenario that would make Japan seriously consider sending forces abroad, with the exception of UN-mandated peacekeeping missions. “Even then, their role will be in a more logistical area, not the frontlines,” Tatsumi added.

Keisuke Suzuki, a Japanese politician from the Liberal Democratic Party and junior government minister, echoed this sentiment. He said that Japan’s legislative changes were implemented mostly to match international standards of contributing in global peace missions.

“During the Gulf War in the late 80s and early 90s Japan only sent money, and didn’t send any human effort, and at the time we were criticized by a lot of the international community,” Suzuki told the BBC. “It’s important to show a strong commitment to peacebuilding and peacekeeping.”

Nevertheless, Thomas U. Berger, an Asia Program fellow at Washington D.C.’s Wilson Center, noted that while the new defense posture may be subtle, it lays the groundwork for something potentially significant. Berger views Japan's modest 1.5 percent increase in defense spending this year as a small step toward better equipping Japan Self-Defense Forces for a more active combat role.

“That means investing in amphibious warfare capabilities to repel a Chinese landing on the Senkaku/Diaoyus and neighboring islands, improving Japan’s anti-submarine warfare capabilities … it should also mean improving anti-missile defense abilities — an issue made all the more urgent given the recent North Korean ‘hydrogen’ bomb test and continued missile development program.”

Berger added that along with renewed alliances with the U.S., Tokyo needs to be able to provide American forces with support in the event of a military clash. “Japanese ships are now able to defend the U.S. and potentially other allied nations’ ships on the high sea. Japanese forces are able to provide military protection and logistical support closer to combat areas. And intelligence coordination is improving."

Berger says that while the new legislation is a step toward eroding cautiousness by the government in sending forces overseas, there is still a strong aversion from the Japanese public and elite to get involved in overseas military missions. Because of this, he believes that Japan will remain pacifist for the time being — and any changes are unlikely to happen overnight.

“Could Japanese forces be dispatched overseas on combat missions or missions that turn into combat missions?” Berger asked. “In principle, yes, but it is still difficult to imagine how this might come about. There is no doubt things are changing, but they are changing very gradually and at a cautious and deliberate pace.”